Social media went into meltdown as the matchball for the Euro 2020 opener between Italy and Turkey arrived onto the pitch via a small remote-controlled car.

The European Championships opener at Rome’s Stadio Olimpico marked the start of the tournament which meant an Opening Ceremony took place, with Andrea Bocelli singing the iconic ‘Nessun Dorma’ just minutes before kick-off.

But the Italian opera singer was rivalled in terms of entertainment by a small Volkswagen car bringing the ball onto the pitch with both teams waiting at either end for the small vehicle to reach referee Danny Makkelie – which left fans bemused online. 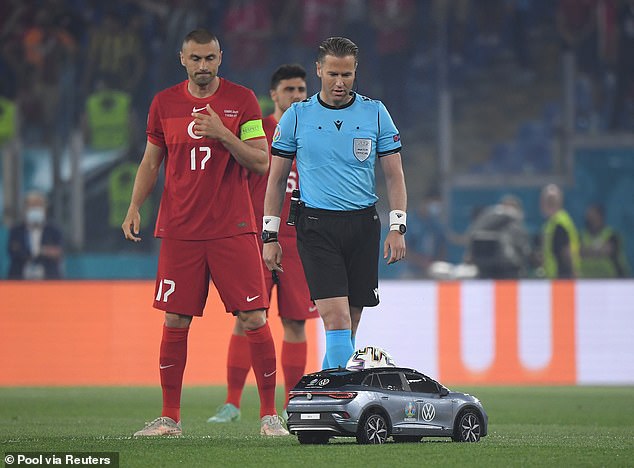 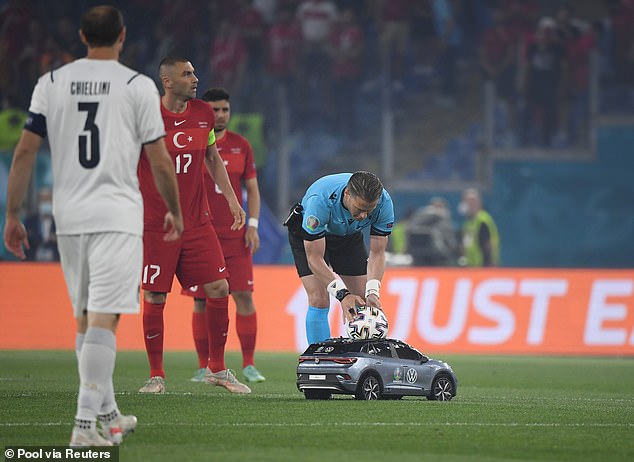 One fan tweeted: ‘The little remote control car that delivered the ball onto the pitch is my favourite moment of #EURO2020 so far and I don’t think it will be topped’

An England fan said: ‘Just watch that little car take out one of ours on Sunday! #ENG #EURO2020’

Another supporter posted: ‘I’m dead at this little car driving the football to kick off!’

One bemused fan added: ‘My highlight the little car delivered the ball to the ref!’ 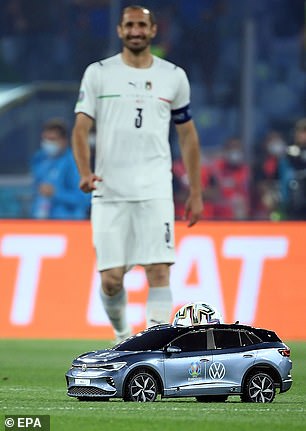 England Women’s international Lianne Sanderson said: ‘Am I the only one that wants that little car that brought out the. ball?’

Italy’s veteran defender Giorgio Chiellini also failed to hide his laughter when the car arrived on the pitch in the Italian capital, providing a moment of light relief ahead of the highly-anticipated fixture.

Volkswagen was trending on Twitter by kick-off as fans continued to be amazed by the incredible pre-match stunt.

The car manufacturers are one of the sponsors at this summer’s European Championships, which will be taking place across 11 cities.

Volskwagen’s slogan for the tournament is ‘We Drive Football’ which added a further element of humour during the Stadio Olimpico stunt.

The competition was meant to take place last summer but was postponed due to the coronavirus pandemic, as no football in Europe was being played by the time the tournament was meant to start in June 2020.