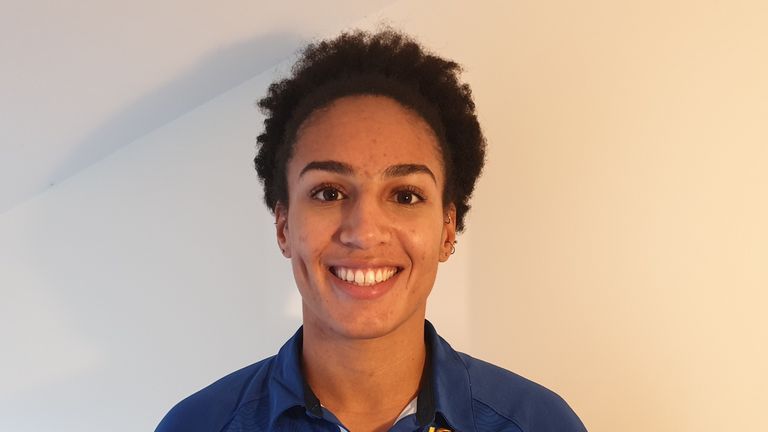 Vicki Oyesola is the second player to commit her future to new Vitality Netball Superleague side Leeds Rhinos Netball.

The defender, who is a member of Jess Thirlby’s England Vitality Roses squad for the three-Test tour to New Zealand this month, joins Jade Clarke in signing a one-year deal at the new franchise.

Whilst at her former franchise Loughborough Lightning, Oyesola won the Vitality Netball Superleague’s Young Player of the Season Award in her debut season and has secured four international caps.

Alongside her netball career she will continue her studies in Mechanical Engineering Degree at Loughborough University.

“I’m really looking forward to joining Leeds Rhinos Netball, it is an exciting opportunity to be building with a brand new team, with great staff and players,” the defender said.

“Joining a club at the start gives us the ability to grow together and we have the opportunity to build our own culture.

“When I spoke to Dan Ryan, he spoke about creating a team that is strong and diverse, bringing in players from different areas with different experiences and building and developing the players individually as well as the team as a whole, which is something I really bought into.

“I am looking forward to building strong partnerships within the team and my ambition is that we become a competitive side who push for a top four position.”

Leeds Rhinos Netball will be lead by their high performance director and head coach, Ryan, who will work alongside assistant coach Maggie Birkinshaw.

The franchise will begin their pre-season programme on October 5 and all athletes are committed to a full-time programme.

“Vicki is an absolute powerhouse of an athlete and one of the most exciting young defensive talents in the country. Ryan said of his new signing.

“She’s such a ferocious competitor, never takes a backwards step and I just love the ferocity and intensity that she brings to the court every single time.

“Her attacking style of defence is uncompromising and her ability to wear down her an opponent and come up with the ball when it’s matters the most, is so impressive.

“She is another big signing for us and is definitely going to be a huge asset to our defensive unit. I can’t wait to see her flying for intercepts and charging down court next season.”

Live netball returns to Sky Sports with the Vitality Roses taking on the Silver Ferns in a three-Test series at the end of October. Join us for the first Test on October 28.

White Women in Power Are Not Automatically Feminist Heroes

No turkey for Christmas? Fears of a festive feast shortage

Melania Trump shocked Beyoncé got Vogue cover: recording
We and our partners use cookies on this site to improve our service, perform analytics, personalize advertising, measure advertising performance, and remember website preferences.Ok