The TV channel – currently British Sports Network of the Year – beat competitors ITV and Sky Sports for the right to show all the country’s international matches, it was announced in April, in a first foray into men’s football.

The deal will see England’s games in the Nations League, European Championship qualifiers and international friendlies on free-to-air television until 2024, with all the Three Lions’ previous Nations League games on Sky.

Channel 4 has done well with several high-profile events like Emma Radacanu’s US Open win and the thrilling finale to last year’s F1 season, and has been renowned for its strong Paralympics coverage since 2012.

But it has, however, come under intense criticism from viewers for the coverage of the Three Lions’ Nations League clash with Germany in Munich.

One fan tweeted: ‘Sorry but moving it to Channel 4 is awful, all too PC.

‘Pougatch, Keane, Wright and Emma Hayes all on ITV are much better, I like Emma Hayes she knows her stuff.

‘This new lot appeal to the woke, snowflake PC brigade.’

Another said: ‘Channel 4 Football Meeting: “This is very new for us having International Football, let’s make it as fresh and different as possible, what a great opportunity.” 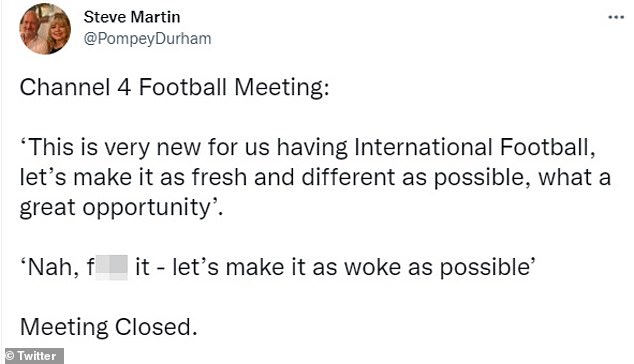 A third added: ‘This channel 4 and football woke s*** has broken me, won’t be watching the rest. No politics and the like in a football match.

‘I watch it to get away from the world problems & woke stuff, not see more of it. Sod this. I’m not against it but just leave sport alone.’

More fans agreed that Channel 4’s coverage of England’s match against Germany was ‘painful to watch’.

Another stated: ‘Can we all agree @Channel4 coverage of football is awful.

One fan tweeted: ‘This @Channel4 coverage of @England is painful to watch. It’s amateur hour stuff, the presenting team are awful. The bloke that has lived in Germany the past 9 years, bore off!!’

Some even fans even went as far as stating they may not watch anymore England games going forward if the coverage remains this bad.

A fan posted: ‘2 games in and I don’t think I can watch England on your channel anymore. This is the worst coverage I’ve ever seen, my ears are bleeding.

‘I’ve got to listen on mute. Absolute tools presenting and as pundits.