Adelaide: The Melbourne Vixens remain unbeaten after three rounds of the Super Netball season after notching a 16-goal away win over the Adelaide Thunderbirds.

The Thunderbirds' 58-42 home-ground defeat was made all the more painful with possible injuries to English international mid-counters Beth Cobden and Chelsea Pitman. 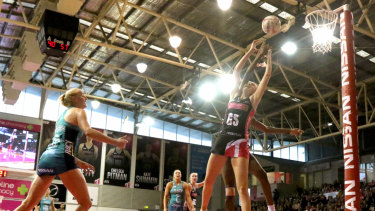 Jo Watson of the VIxens watches Sasha Glasgow of the Thunderbirds jump for the ball. Credit:AAP

Precision shooting early on Saturday afternoon from Thunderbirds Maria Folau (18/22) and Sasha Glasgow (24/30) kept their side within two points at quarter- time, but the hosts lost impetus in the second term when Cobden limped off with a leg injury.

Cobden, returning recently from a knee reconstruction, was unable to return and would undergo scans this week.

Sydney-born Pitman, who injured her calf during the pre-season, also exited before halftime and watched the rest of the game from the bench.

A well-drilled Melbourne mid-court led by Renae Ingles and effective feeding into the goal circle helped the Vixens to lead by nine points at the midway point and 13 heading into the final quarter.

Australian shooter Caitlin Thwaites was in form, converting 29 of her 31 attempts for the Vixens, while Tegan Philip (29/39) was the other key contributor to their third-successive victory.

Coach Simone McKinnis said while it had been a strong start to the season, there were aspects of the Vixens' game that needed improvement.

"We're probably a bit slow to start in our quarters but certainly the finish in each quarter has been pretty strong," she said after the game.

"We're working hard for it each week." 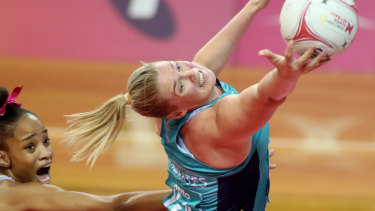 Caitlin Thwaites of the Vixens had a great game.Credit:AA

Thunderbirds coach Tania Obst said her side also had trouble maintaining a high standard through each quarter.

"We probably had two or three minutes within each quarter, maybe a little bit more in the second, where we're allowing our opposition to dig into the lead and we're unable to hold it off," she said.

"I think it's perhaps more our skill execution rather than not being able to play through."

The Thunderbirds next travel to Melbourne to take on the Magpies on Friday, while the Vixens take on the Fever on Sunday in Perth.