The Melbourne Vixens have won the 2020 Super Netball grand final, defeating the West Coast Fever in an absolute classic.

Alice Teague-Neeld missed a super shot for the Fever with one minute to play and the Vixens re-gained posession and held onto the ball for the remainder of the game to secure the victory. 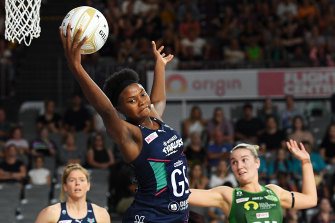 Mwai Kumwends wins the ball in the grand final.Credit:Getty Images

The Vixens' grand final win, their third in their history, came in the final games for Caitlin Thwaites and Tegan Philip.

The first quarter was tight and enthralling but the real fireworks began in the second term.

Melbourne took the lead through a quick couple of goals to Thwaites but the Fever got it back quickly.

Then Kate Eddy, first up after injury, flew through the air to take a brilliant intercept that created another Vixens goal and gave her team the lead.

Mwai Kumwenda defied the laws of physics to take a pass close to goal simultaneously on one leg and bending low to the ground.

Her battle with Courtney Bruce was intense, the Fever defender trying to snatch the ball off the Vixens shooter even after she'd scored.

Jhaniele Fowler was, as always, the ultimate target under the goal for the Fever, with Vixens Emily Mannix and Jo Weston flying around her trying to blunt her influence.

Moments after Thwaites had missed a two-point shot at the other end Fowler sunk a Super Shot after the half-time buzzer to give the Fever the lead at half-time.

Where Fowler is big enough to stand and deliver, her opposite number Kumwenda was a constant dynamic presence for the Vixens. She scored using that guile late in the third term to give her side the biggest lead of the game at 47-42.

That lead was cut to three at the final change.