HAVING qualified for their second-ever World Cup, Wales will be determined to leave their mark on the upcoming tournament.

Previously, Wales qualified for the 1958 World Cup, where they lost 1-0 to the hosts and winners, Brazil. 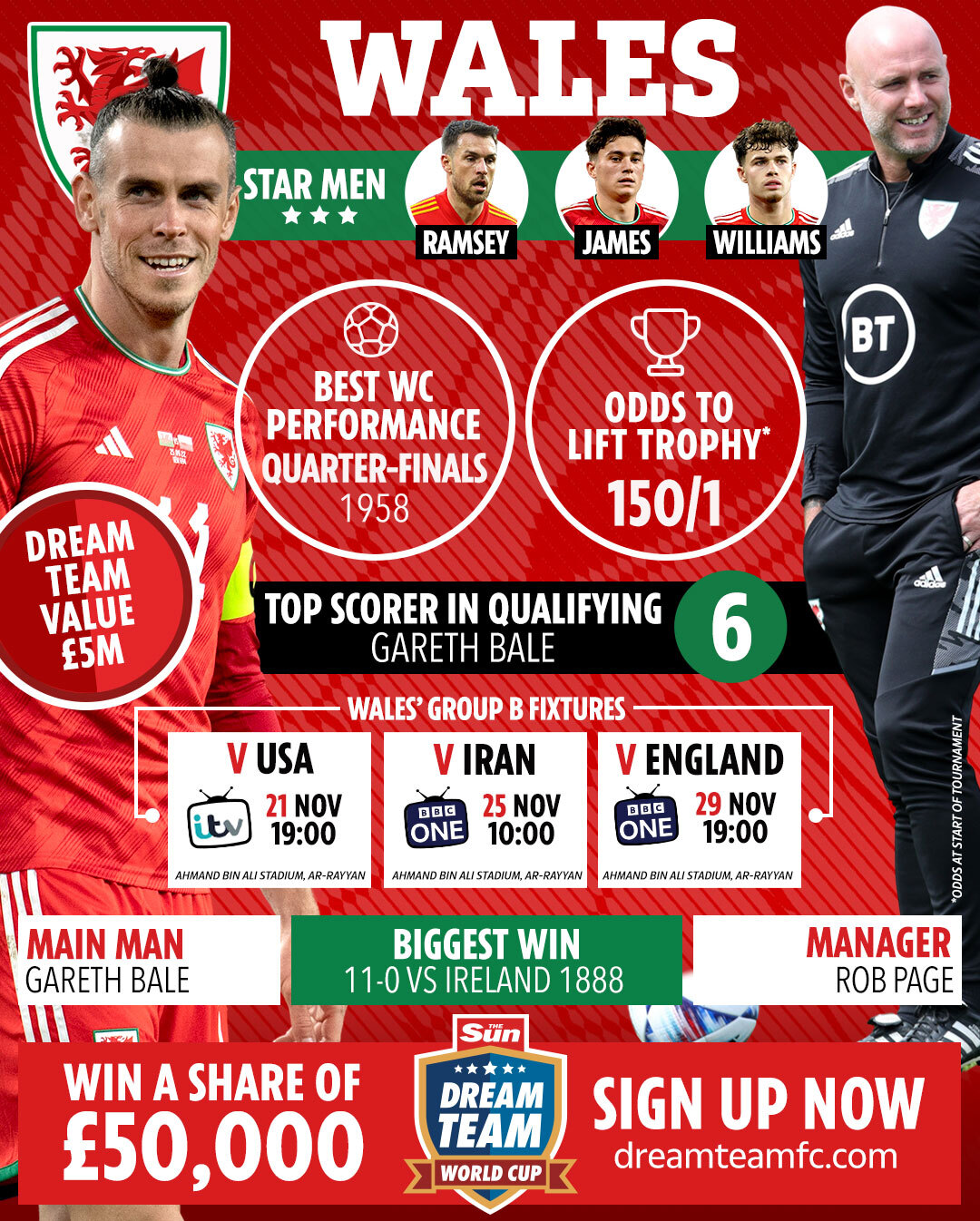 The fitness and availability of these players will be key. 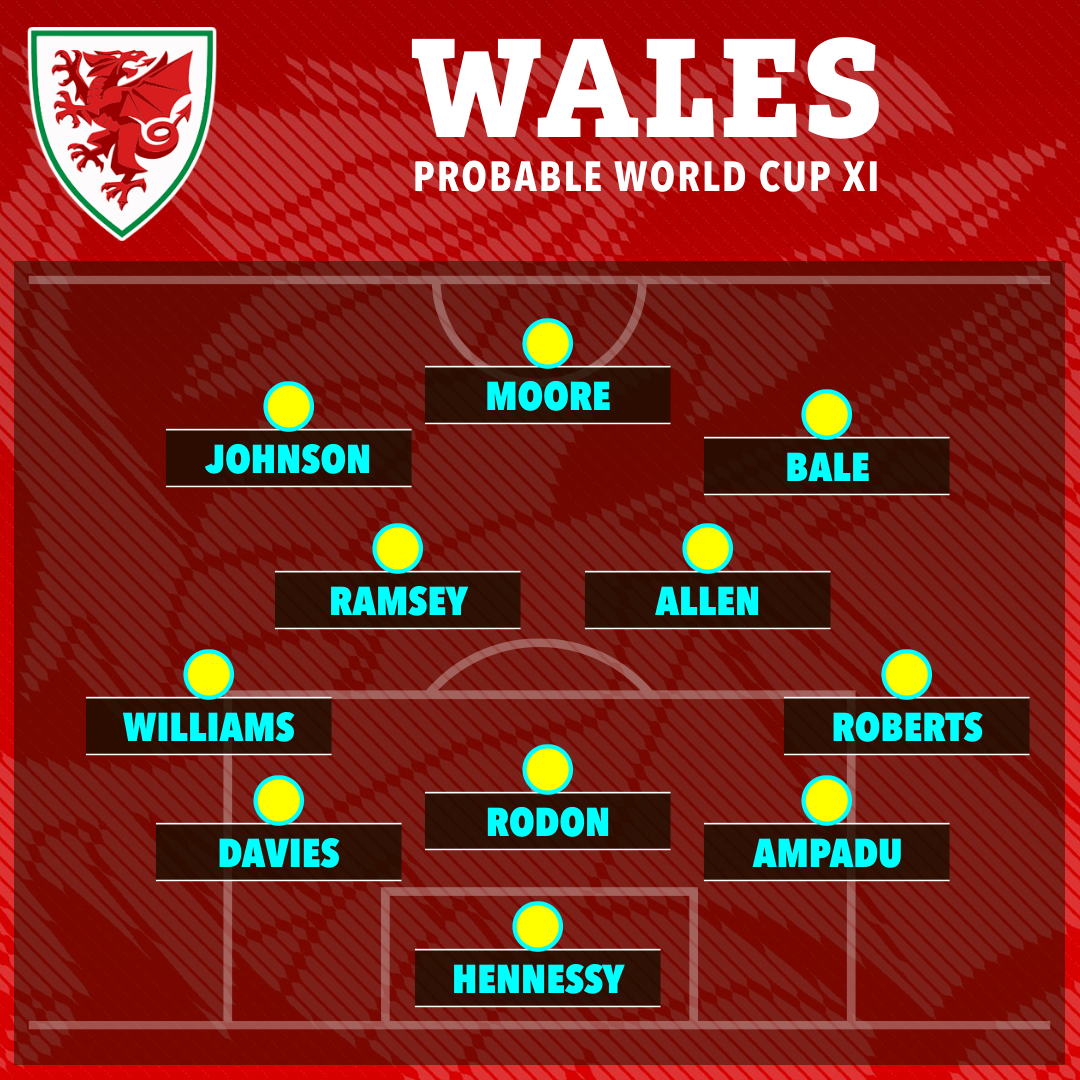 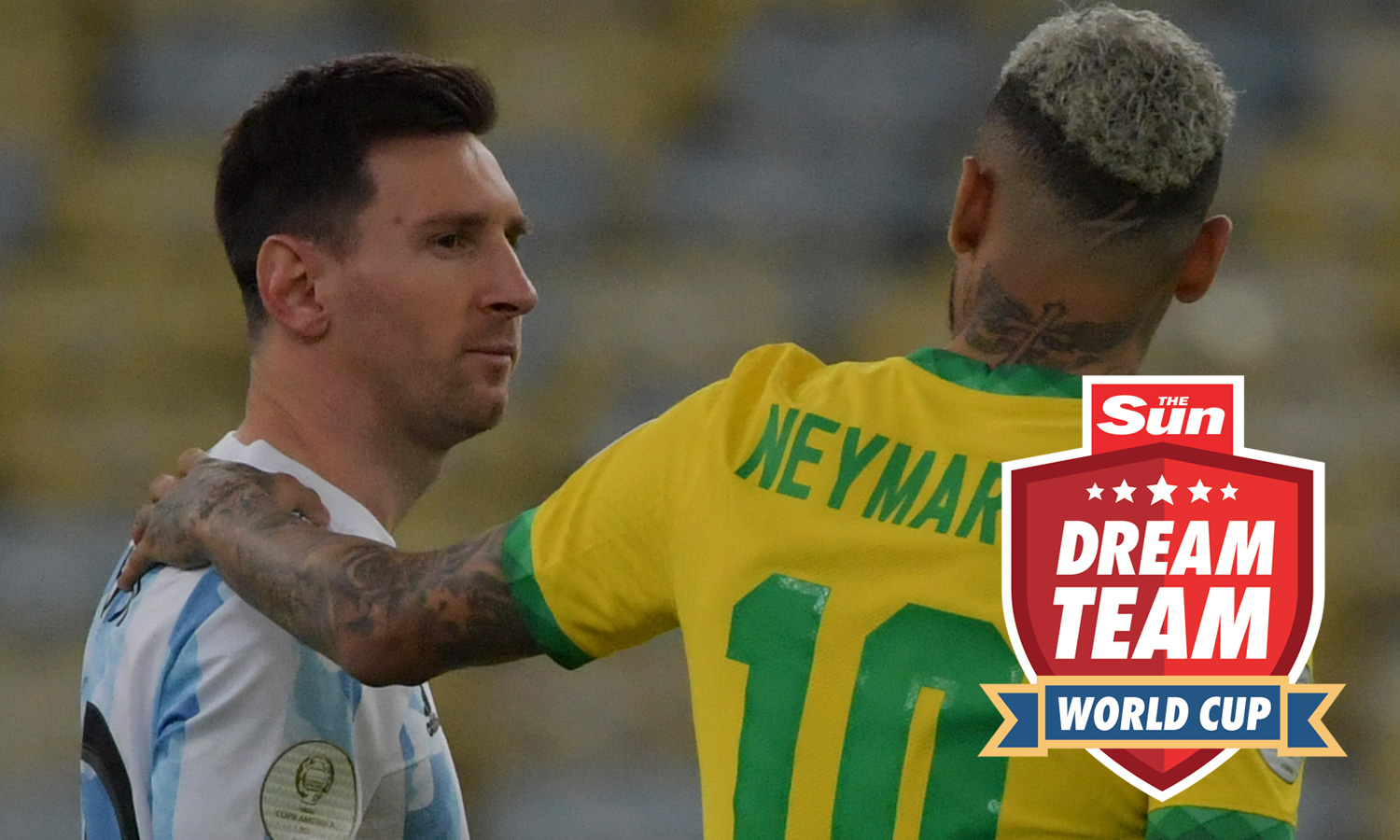 Which teams should Dream Team World Cup gaffers back and who should they avoid?

Rob Page likes to set his side up in one of two formations. 5-3-2 or 5-2-3- and the latter is believed to be preferred in Qatar.

The likely backline consists of some experience with a new youthful core. Connor Roberts and Ben Davies of Spurs will make up the defence in what is a very settled, tried and tested backline.

Tributes as ex-Austrian international, 57, dies after being hit by train

Wales are difficult to beat and their defensive unit is a massive part of this.

Moving on to the midfield which is an area of quality for Wales. Aaron Ramsey and Joe Allen have played numerous times together and are the heart of the team.

They provide good experience and quality in the central area of the pitch. Allen now plays for Swansea City and enjoyed a positive start to the season.

Ramsey has moved to Nice and has featured quite regularly for the French outfit. The midfield area can also be covered by Ethan Ampadu who has played for his country in midfield.

His versatility means he is well able to cover if needed and he helps if Page opts for a 5-3-2.

The likely front three will consist of top goalscorer Gareth Bale on the right, Keiffer Moore through the middle and Brennan Johnson on the left.

Dan James can also be included as he and Johnson will likely rotate based on form. The attack is well balanced with Moore acting as a target man allowing for Johnson and Bale to play off him.

Bale is dangerous from the right-hand side and his set pieces are something to look out for.

Wales are comfortable in mixing their style of play up. They are great at creating opportunities for Moore to compete in aerial duels.

The image below shows how they work a situation so that they can benefit from it. The above image displays the wing-backs — highlighted blue — are as wide as they can be.

The front three is relatively narrow and Moore, highlighted yellow, swaps positions with a winger when he is expecting an aerial ball.

Below is another example of how their key positioning in those situations. In this example, Moore drops deep to challenge a midfield player for the ball. Bale rotates with him and takes up a central position and is ready to attack the space if Moore wins the header. As mentioned, Wales excels in their wide areas.

Below is an example of how Brennan Johnson creates a goal for Moore with his direct dribbling ability. 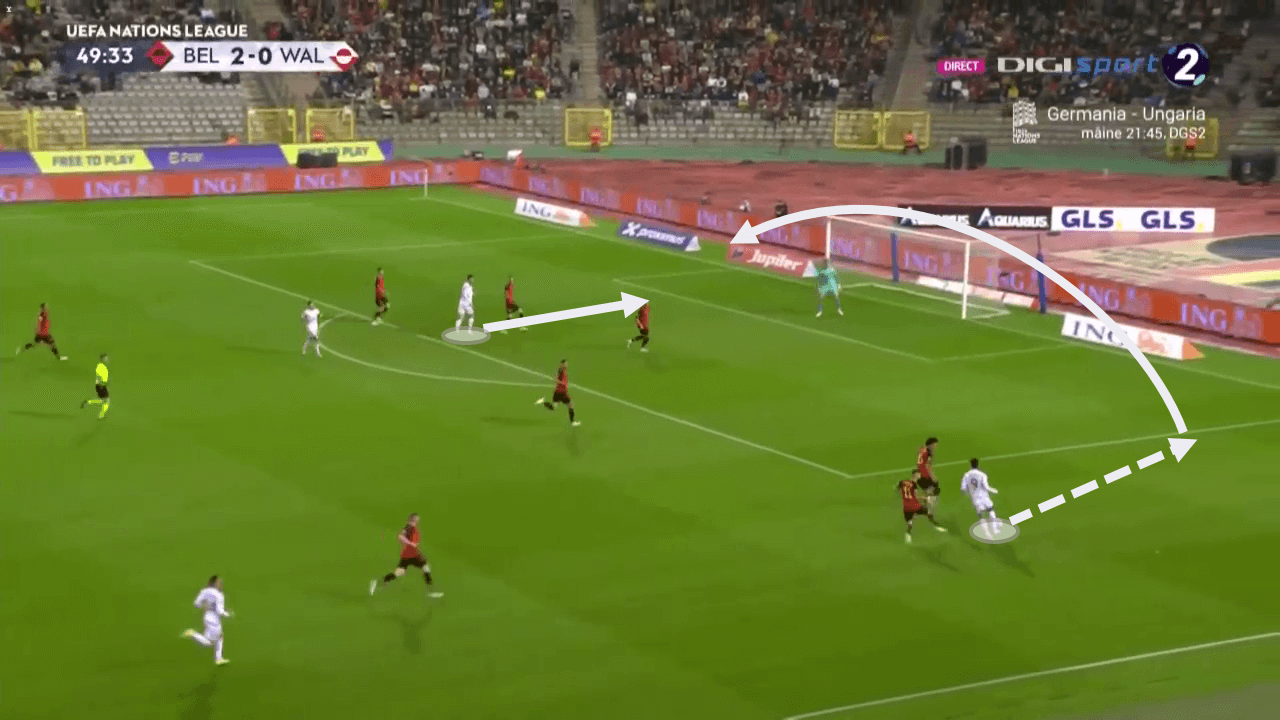 Johnson uses his dribbling ability to directly attack the space towards the byline.

Below is an example of how Neco Williams finds himself in an advanced position with the attacking players taking up the central areas. Williams attacks the space before crossing the ball into his teammates.

Another method of attack to keep an eye out for is their long throw. Connor Roberts is the man who can hurl the ball into the penalty area. His throwing is dangerous and can easily lead to goalscoring opportunities.

By targeting Moore, they are likely to win the first ball and the way that they set up enables them to capitalise on any loose balls. While Wales are hard to beat defensively, they do not have rock-solid defensive stats. The aerial duels won are a worrying stat.

Below is an example of how Wales set up when the ball is high up the pitch.

The midfield players of Wales, Ramsey and Allen coloured yellow, step high up the pitch and look to engage quickly if the ball is played centrally. The forward players maintain a solid shape and do not look to engage any higher than they currently are.

Furthermore, whilst remaining in shape, Wales maintains their 5-2-3 formation which allows them to cover a wide range of the pitch. 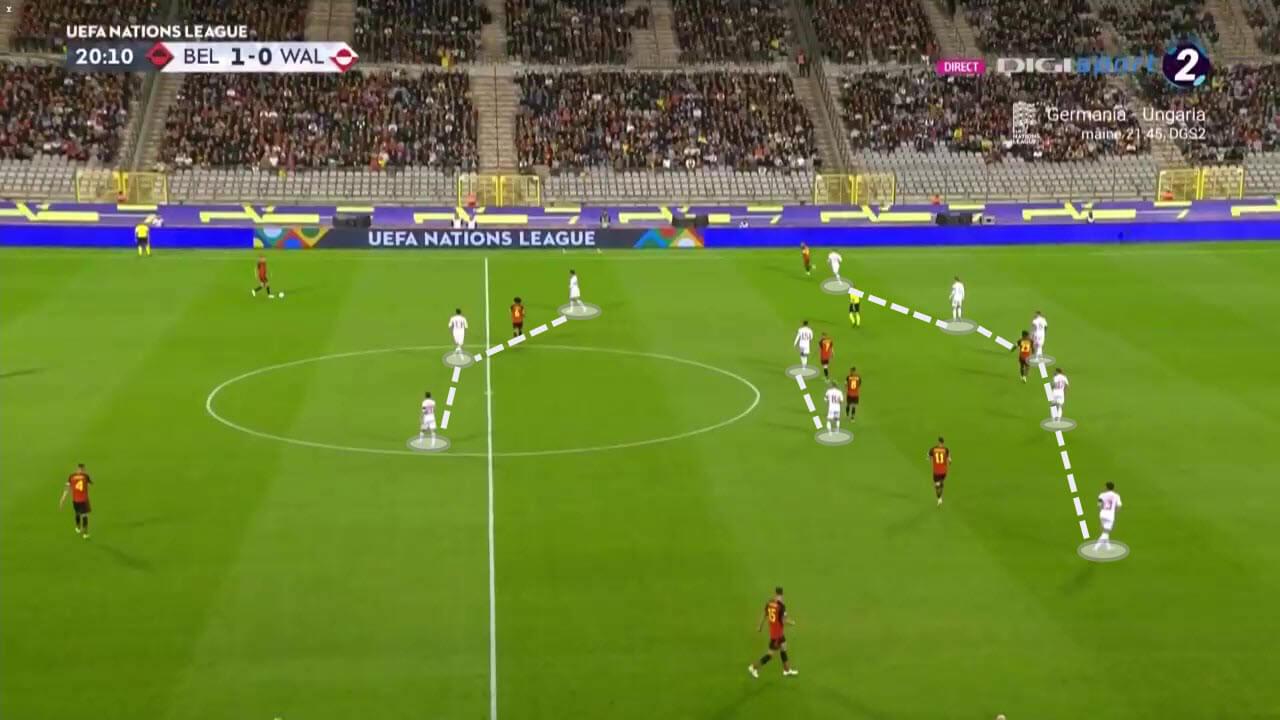 As mentioned above, Wales do not look to press high up the pitch. Their main objective is to stop the ball centrally.

Their style out of possession is well-drilled and they are rarely played through centrally. The below example shows how they defend the penalty area. The wide-attacking players drop deep to create a bank of four alongside the central midfield players.

Wales look to play forward quickly and be direct in offensive transitions. They don’t break forward with a lot of support other than the wide players. 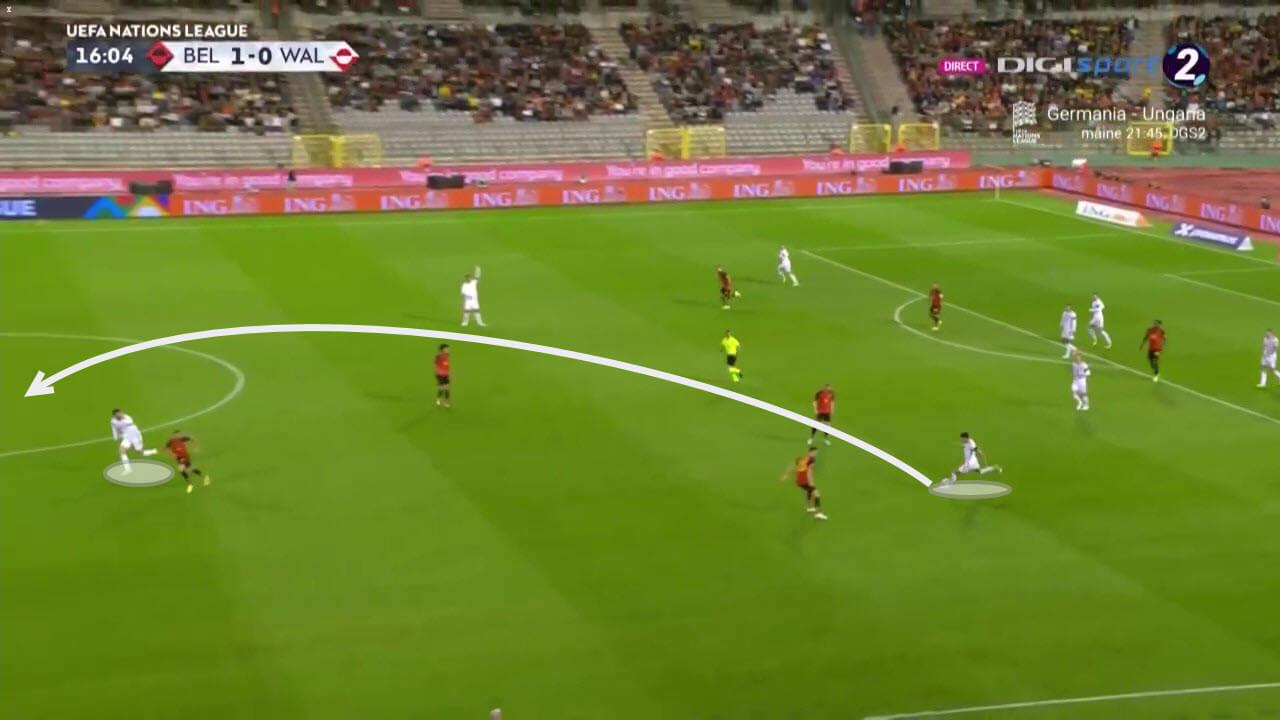 Once the ball has been played, Moore looks to hold possession and wait for support from his teammates. This usually comes from the wingers, and they can look to build an attack from there.

Defensively, Wales transition quickly into their defensive roles. They are quite conservative in the way they move. 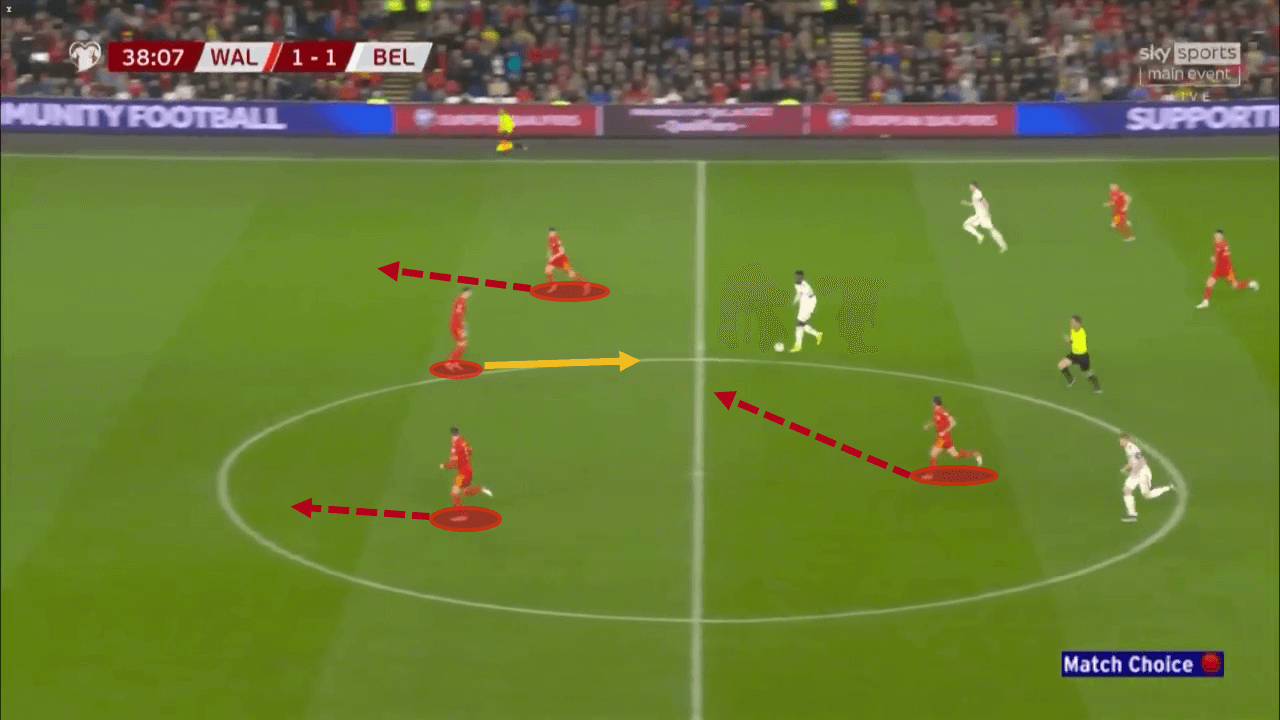 The defender with the yellow arrow looks to delay the opponent by cautiously engaging him.

Wales’ attacking options are quite plentiful, especially in wide areas. As mentioned previously they are blessed with the likes of Bale, James, Johnson and Matondo.

The majority of these wide players are comfortable playing across the front three as a striker or winger on either side.

The use of Gareth Bale as a striker has been done before and is something that Page could look to do, depending on the game.

The middle of the pitch has an abundance of young talent along with a wealth of experience.

If fit, Ramsey and Allen are first choice options, but due to frequent injuries, names like Harry Wilson and Joe Morrell could easily be important. Ampadu is also an important name for this team.

Midfielders such as Jonny Williams, Dylan Levitt and Rubin Colwill could also play.

The defence is solid. Wayne Hennessey, Ben Davies, Ethan Ampadu, Joe Rodon and Connor Roberts will be accompanied by the young and exciting Neco Williams.

Of course, Gareth Bale is the main man in the Wales squad but since moving to the MLS, his minutes have been limited and his form hasn’t been great.

Neco Williams, on the other hand, has been making an impact in the Premier League for Nottingham Forest of late.

The young wing-back joined from Liverpool in the summer and has started brightly in the Premier League. His overall game is vital and provides a good balance to the Wales side.

Wales find themselves in a difficult group competing with England, Iran and the USA.

England improved their form in the last years, which means the USA and Wales likely will fight for the 2nd place of Group B, but they have good chances of qualifying for the Round of 16.

For even more detailed analysis of all 32 teams in the FIFA World Cup 2022, download your copy of the November Total Football Analysis magazine here