EDEN HAZARD proved he is almost back to his best by scoring an outrageous rabona during Real Madrid training.

His Los Blancos team-mates are still waiting to see the Belgian hit top form since arriving in Spain but he left them stunned with his effort on Sunday. 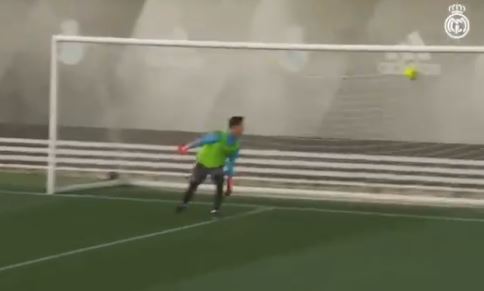 Hazard, who is currently out injured for the rest of 2020, proved he is gearing up to take next year by storm if training is anything to go by.

The 29-year-old pulled off an audacious rabona style shot during a shooting drill that left the goalkeeper stranded as it nestled in the top corner.

And the goal meant fans were left eagerly awaiting Hazard's return to the pitch, with one fan tweeting: "Boom! Eden Hazard is back."

A third added: "Is that Kepa in the post? I'd love to see that goal on the pitch btw."

It was a rabona during the win over Eibar in November 2019 that proved a small highlight for Hazard in an otherwise disappointing stint in Madrid.

SunSport previously reported that the winger has reportedly cost Real £65,000 per minute since his move from Chelsea in 2019.

The Belgium international, 29, has played just 26 times for Real since then, scoring only three goals.

And the LaLiga champions are sure to be wondering whether the £65k per minute they’ve spent is looking value for money.

Hazard’s latest injury – a hamstring issue – is the NINTH separate problem he’s picked up in the Spanish capital.

By comparison, the ex-Lille starlet missed just 20 games through injury during seven years at Chelsea.