FLOYD MAYWEATHER looked at ease facing a barrage of punches as he put the final touches to his training regime before fighting Logan Paul.

In a video uploaded to his Instagram, the 50-0 legend worked on the pads with trainer Gerald Tucker. 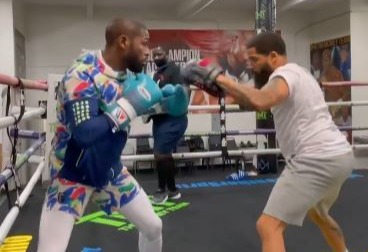 Tucker threw a flurry of soft swipes to test Mayweather's speed and reflexes, all of which he met without breaking a sweat.

The American, 44, has only a few days to wait before jumping into the ring with YouTube sensation Paul, 26.

Many have raised eyebrows at the exhibition showdown, including Mayweather himself having described it as a 'legalised bank robbery'.

But SunSport have revealed his sparring sessions to be anything but a walk in the park.

The man dubbed 'Money' will face Paul in Miami on June 6 and further returns to the ring are already being eyed.

Despite the rise of YouTuber fighters such as Logan, brother Jake Paul, and KSI, Mayweather is widely expected to come out on top in Florida.

He recently described how he 'has to' box with the online sensation as it is the 'smart' thing to do.

During the 'Inside Mayweather vs. Paul' hype show, the former champ explained: "My nickname is Money for a reason.

"I worked extremely hard for years and years to get to a certain level. A level where we can start calling everything an event.

"I believe in working smarter, not harder.

"So if it’s something easy like [the Paul fight], a legalised bank robbery, I gotta do it. I have to do it."