JAKE PAUL was dubbed 'atrocious' and 'slow' after a training video of the YouTube fighter was posted online. 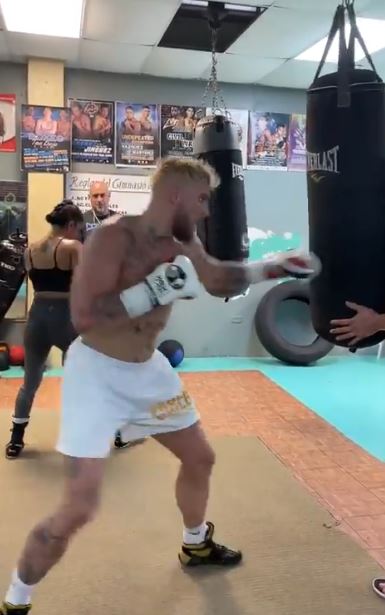 Fans quickly picked up on the difference between the two stars' technique, leading to Paul receiving heavy criticism online.

The American is preparing to face UFC veteran Tyron Woodley on August 29, in an event which sees Serrano defend her unified belts on the undercard.

Benn added: "Look at the difference in the two boxers. The pro is tight and efficient whilst the pretender telegraphs his punches and almost breaks his own leg, atrocious footwork. And he’s got Canelo in his sights lol?"

Dave remarked: "I'd recommend some boxing lessons. They're not that expensive and you can learn a few basic things like how to throw a right cross."

BETTING SPECIAL – GET £50 IN FREE BETS WITH SKY BET

Another onlooker tweeted: "Jake still has no clue how to box. That right hand is atrocious. Hands down, doesn’t bring his guard back up. It’s slow and telegraphed. As soon as he fights a boxer he’s done. Even an amateur boxer would mail him."

And Antonio wrote: "Amanda’s form is impressive, kept her hand up after throwing the cross. Jake on the other hand, keep working lol.."

Paul has told SunSport that he has a long list of fighters he wants to defeat having so far gone unbeaten in the ring.

Among whom is Tommy Fury, the Brit prospect who also fights in Ohio later this month with an eight-round affair against Anthony Taylor before Paul faces Woodley.

If both men are victorious, it could set up a long-awaited clash between the Love Island favourite and the YouTuber.

But Paul has claimed that Fury would be no match for him after he grabbed Floyd Mayweather's hat earlier this year.

"Look, if you want to wear a hat, that s***'s going to get taken, one way or another. I'm stealing everybody's hat, nobody's hat's safe.

"This kid's not fast enough, Floyd Mayweather, I took this guy's hat and he had to have 20 guys to hold me down before he could get one punch off 15 seconds later.