But questions were raised after the defeat as a fellow fighter accused him of 'diving'. 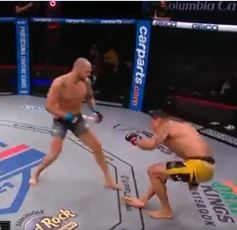 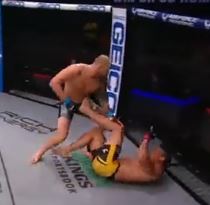 It had already been delayed by an hour so ESPN could show a high school football game.

And waiting fight fans were treated to just 13 seconds of action.

Ferreira threw an early left leg kick which connected but did not do Hamlet any damage.

And before his opponent had even had a chance to retaliate, Ferreira fell to the canvas clutching his right leg.

The 'injury' appeared to be in the hamstring area but Hamlet did the professional thing and leapt on him in an attempt to finish the fight.

He rained punches in on his seemingly stricken opponent and the ref swiftly called it.

Hamlet remained subdued as the his victory was announced shortly after.

But PFL fighter Chris Camozzi reckons Ferreira had the injury before the fight and showed up just for the money.

He tweeted: "“Huh. That’s a dive by Cezar. I saw him at the weigh-ins, black and purple leg. My coaches saw it too.

"He showed up for a show paycheck @PFLMMA can’t believe they cleared him to fight.”

Regardless, Hamlet progressed and will face the winner of Antonio Carlos Junior and Emiliano Sordi in October's final.