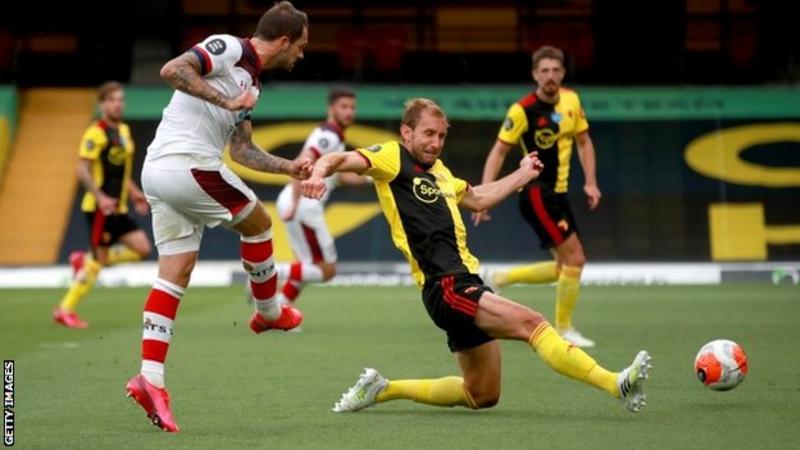 And he blasted home a second – his 18th Premier League goal of the season – after controlling Ben Foster’s poor throw before surging towards the box.

Watford were bereft of ideas going forward and did not manage a single shot on target.

They did score when Jan Bednarek turned a cross into his own net – but their hope of a comeback was brief as three minutes later James Ward-Prowse’s brilliant free-kick settled the game.

Watford, who have only won once in their past 11 games in all competitions, remain one point above the bottom three.

Saints manager Ralph Hasenhuttl said his side were not “100% safe” before kick-off but they now move to 40 points, 13 clear of the bottom three, surely ending any tiny bit of doubt.

Watford need to improve – and quickly

Watford’s preparations for the game were not helped by the omission of Andre Gray, Nathaniel Chalobah and Domingos Quina, with the club saying it was “to ensure the health and safety of all players, staff and officials”.

It came after Gray reportedly held a birthday party at his home, breaking coronavirus lockdown rules.

They could probably have played this game for another five hours without scoring a goal of their own.

The Hornets had one half-decent spell in the game – the opening 10 minutes of the second half when Troy Deeney shot over the bar.

The odd time they got in behind the Saints back four, their final ball was wrong.

The usually reliable Foster, making his 100th consecutive Premier League appearance, was totally at fault for the second – as his throw out went straight to in-form Ings.

The only way they were going to score was with a huge helping hand – and they got it when Bednarek turned home a cross from substitute Jose Holebas.

However, they conceded again soon afterwards to extinguish any hope of a recovery.

Ings’ two goals take him up to second place in the Premier League goalscoring charts with 18 goals, above Sergio Aguero, Pierre-Emerick Aubameyang and Mohamed Salah.

Only Leicester’s Jamie Vardy, on 19, has scored more.

That is not a bad record for a player who only managed seven in the league last season and whose England career entails 31 minutes of a game against Lithuania in 2015.

He was the outstanding player on the pitch at Vicarage Road, even aside from his goals.

The first chance of the game was Shane Long’s shot straight at Foster from Ings’ through ball.

Ings then cut inside from the left before firing home for the opener after receiving the ball from Republic of Ireland Under-19 midfielder Smallbone, making only his fourth senior start.

The second came from a Foster error, but Ings still had a lot of work to do as he received the ball 40 yards out before charging into the box and picking out the corner.

He is the first player to score 10 away goals in the Premier League this season – and the first Saints player to reach that tally since club legend Matt le Tissier in 1993-94.

They had a brief scare after Bednarek’s own goal but Ward-Prowse’s perfect free-kick, which left Foster with no chance, killed the game off.

Nathan Redmond almost added a late fourth when he struck the post. 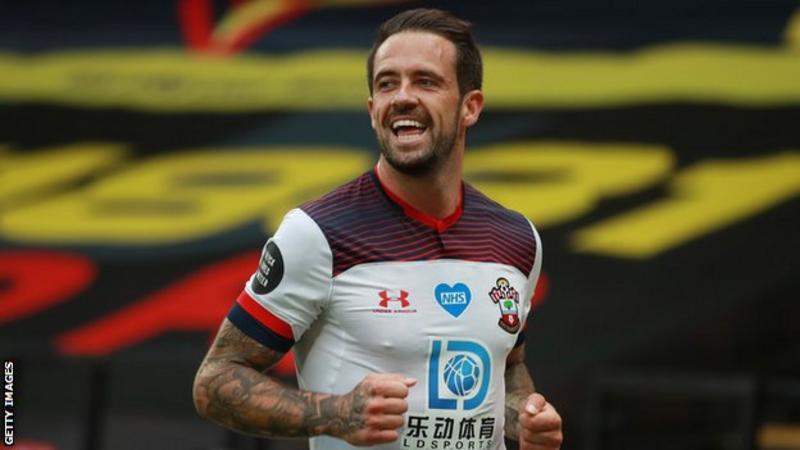 ‘No-one is going to do it for us’ – reaction

Watford manager Nigel Pearson, speaking to Sky Sports: “We were second best for too long. You can’t concede goals like we have, give gifts to the opponents. It makes the job harder.

“We have to go back to showing a cohesion as a group of people. At the moment it is frustrating, because we are not achieving the performances we know we are capable of.

“We have games left in which it is in our own hands to make sure we secure our future in the Premier League. No-one is going to do it for us.”

Southampton forward Danny Ings, speaking to Sky Sports: “It was a physical battle and the lads really fought hard.

“After the last game, we were very disappointed. It was important we came here and did something about that.

“I just want to play each game and score as many goals as I can.”

Both sides have a little break before their next – difficult – games. Watford visit Chelsea next Saturday (20:00 BST) and Southampton host Manchester City on Sunday (19:00 BST).