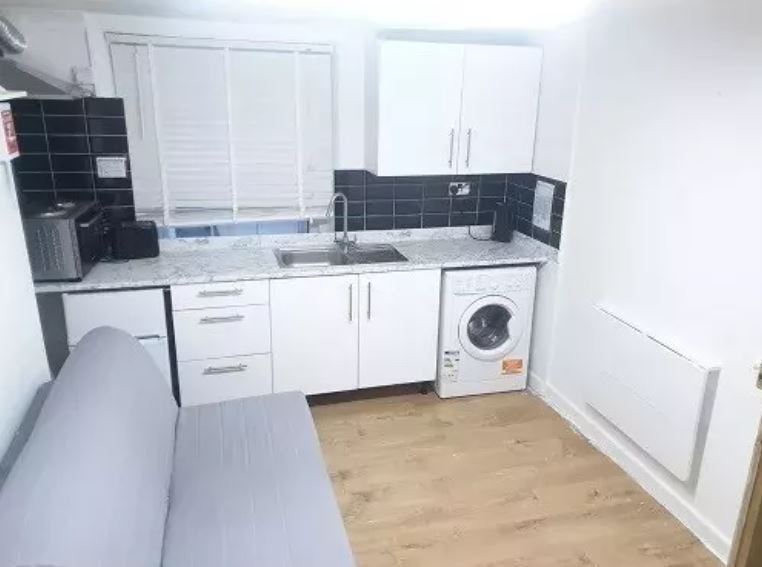 Notting Hill is one of London’s most swanky neighbourhoods, with the second most expensive street in the whole country (£23.5m average house price) located here.

There is a way to live in this upmarket area without the high price tag, but you might have to make some sacrifices to do so… like not having a toilet or bed.

These may seem like necessities for a property, with sleep and cleanliness featuring at the very base of Abraham Maslow’s heirarchy of needs.

But the landlord of this £650-a-month bedsit apparently believes otherwise.

Described as ‘great value’ by agents, the single room features a small kitchenette, the cupboards of which are blocked by the futon that tenants are presumably supposed to sleep on.

If you’ve ever slept on these fold-out sofa beds, you’ll know how uncomfortable they are, which is compounded by its proximity to the smells and sounds of a kitchen.

Although you’ll benefit from the great location – just round the corner from Portobello Road Market and Notting Hill Gate station – you won’t benefit from private bowel movements.

Landlords are required by law to provide a toilet, so there is one available, but it’s not in your self-contained home.

Instead, the new tenant will need to share with other flats in the building, with a single shower and toilet between however many inhabitants need it.

The property’s listing doesn’t show a picture of the shared bathroom, and there’s no indication of how many strangers you might be battling against to get in the shower before work.

Looking at the street on Google Maps, it would appear it’s lined with typical west London townhouses, suggesting that all the other rooms in this one have also been turned into bedsits (without the effort of adding en-suites to each purpose-built ‘apartment’).

This shared bathroom situation is fairly common when it comes to bedsits, but is normally reflected in the rental price, as they were initially designed to be a low-cost housing solution.

The Royal Borough of Kensington and Chelsea states on their website that all house of multiple occupation must include ‘a readily accessible w.c. not more than one floor distant from any user, and at a ratio of no more than one w.c. per five occupiers.’

The loo also needs to be in its own room (with a separate washroom) if five people are sharing facilities.

The local council also says that a room occupied by one person cannot be less than 11 square metres in size.

This bedsit hopefully meets these conditions, but it’s important as a tenant to know what landlords can be held to account over – and how to do it.

Speaking about the rise of ‘semi-studio’ properties, Roger Harding, director of communications, policy and campaigns at Shelter, told Daily Mail: ‘The fact that London’s renters are stuck with these pitiful pint-sized properties is a reflection of the appalling state of our private rented sector.

‘Sky high rents and tough competition for homes in the capital means that many renters have no choice but to take the first place they can afford, and are being squeezed into costly, cramped, and claustrophobic flats.’

If you make the choice to sleep on a sofa and streamline your belongings to fit into a tiny home in your perfect location, that’s fine.

Just ensure you know what you’re getting into, and that your landlord upholds their end of the bargain by adhering to regulations.