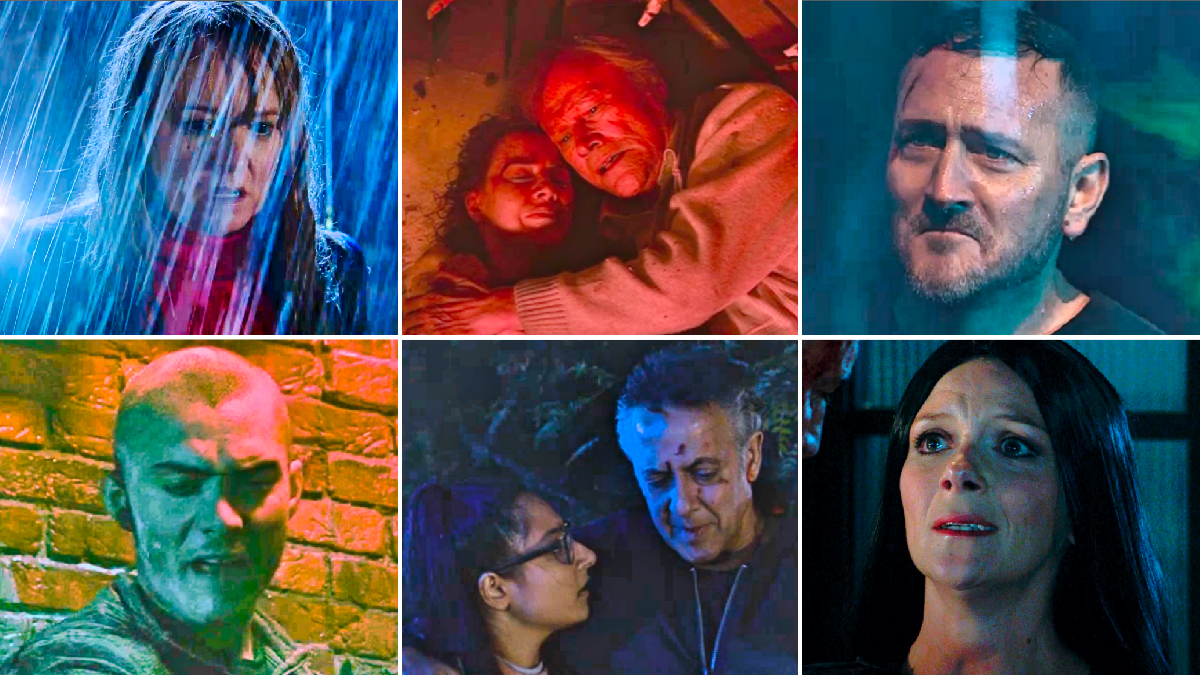 Coronation Street’s third and fourth Super Soap outings delivered the goods, with heart-stopping moments aplenty, and a number of surprise twists that likely left fans with their jaws on the floor!

Picking up from where Monday’s (October 18) double-bill left off, Abi Franklin (Sally Carman) and Corey Brent (Maximus Evans) reeled in the wake of their fall into the sewers.

A tense showdown between the enemies ensued, one which allowed for some incredible two-hander scenes, as Abi desperately tried to see her mission through to the bitter end.

Will Aadi be okay?

Fans had been hoping and praying that Aadi would be okay, after the Alahans’ car burst into flames with the teen inside. It certainly wasn’t looking good, but tonight’s episodes revealed that Aadi had managed to make it out of the vehicle prior to the explosion.

However, he’s not out of the woods yet, as he remains in a serious condition in hospital. Will he pull through?

We certainly hope so! As does Dev, who was evidently riddled with guilt for not coming to his son’s aid when he needed him. Viewers will know that Dev decided to save Asha from the burning car, believing her to be in more immediate danger.

Will he be able to forgive himself?

It’s not just Aadi’s life that is on the line, as Kevin was wounded by an irate Harvey during his escape. The paramedics tended to him at the scene, and he appeared to be conscious before being taken to hospital.

Debbie headed straight to the hospital upon receiving word of her brother’s involvement in an accident, but Kev’s condition remains unknown.

With viewers speculating that lives will be lost during this week’s terror, could Kevin wind up dead in a tragic turn of events?

Abi broke down in tears as Corey at last admitted to having murdered Seb. He did so while she held him at gun point, pleading with him to drop the act and come clean.

Corey appeared to show a hint of real emotion, as he revealed that – in spite of the verdict – he was to blame for Seb’s death.

Without any evidence, however, it’s likely that his confession will have little effect, as there was no-one else present when he admitted his crime.

Nina was right about Abi

Nina Lucas discovered Abi’s plan to murder Corey last week, and she did all she could to try and talk her out it. Abi, however, remained steadfast in her position, claiming that Corey deserves to die.

While Nina didn’t particularly disagree with this sentiment, she argued that justice would be better served if Corey was forced to live with his crimes, rotting behind bars for what he’s done.

But with little to no evidence available to prove that it was Corey who killed Seb, Abi was convinced that murder was the only option. Nina concluded in last Friday’s (October 15) edition of the ITV soap that she wouldn’t stop Abi, as she hoped she would see sense before it’s too late.

Abi disagreed, suggesting that – no matter what – she would pull the trigger. But It turns out that Nina was correct: when it came down to it, Abi wasn’t able to kill Corey.

Why? Because, as Roy concluded, she’s better than Corey. And she is NOT a killer.

Will Abi be arrested and jailed for trying to kill Corey?

While Abi saw sense before it was too late, her nightmare is far from over, as scheming Corey set out to cause more trouble, getting the police involved in the matter.

Abi was taken away by the police for questioning, but will she be arrested for attempted murder? The gun is currently AWOL, and – with Roy being the only witness – it all rests on his shoulders.

Will he lie to protect Abi?

Jenny Connor headed over to the Platts to find Leo amid a treacherous downpour, but her quest could prove fatal, as she was swallowed up by the sinkhole!

There was no trace of the Rovers Return landlady in the aftermath of the shocking event, leaving Shona Ramsey concerned that she was dead.

But have we really seen the last of Jenny?

Will Johnny rescue her or will he die trying?

Johnny was appalled to discover that Jenny had fallen down the open hole, and proceeded to try and rescue her himself. He said he had to go, as he’s still in love with her, and thus he’s not willing to let her die.

The question is: will he succeed in his mission? Will he rescue Jenny?

What’s more, will he live to see another day? Or will his adventure underground prove to be his last stand?

Will Harvey get his revenge?

In one of Wednesday’s more shocking moments, the ground opened up and swallowed Harvey – just as he was about to exact revenge on a terrified Leanne!

Leanne’s nightmare was over for a second time, or so she thought, but little did she know that – somewhere in the sewers – the drugs baron awoke, and not only was he still alive, but he found himself in possession of Abi’s gun!

It’s likely that the criminal will be heading back to the cobbles for one final stand. But will he succeed in taking the lives of those that wronged him?

Will blood be shed? Or will he be caught before any bullets are fired?

Will the sinkhole claim any more victims?

The sinkhole is verging on becoming the biggest killer the eponymous street has ever seen, and given that it was once home to the likes of Richard Hillman and Pat Phelan, that really is saying something!

First it claimed Abi and Corey – who thankfully managed to make it to safety. Then, Jenny and Harvey were swallowed up! The latter two’s fates remain uncertain, as does Johnny’s who willingly went down to save Jenny.

But with holes opening up all over the cobbles, will any other residents be set to venture underground? We can reveal that the answer to this question is a solid yes, as this clip from Friday’s outing sees Shona end up in the sewers!

But will she make it back up alive?