90 Day Fiance stars Paul Staehle and Karine Martins are the latest cast members to be fired from the TLC series. The couple has made alarming accusations of domestic violence against each other, with both filing for protective orders earlier this year.

In a written statement back in July requesting a protective order, Karine accused Paul of rape, being physically abused, and withholding her green card.

Paul filed his own protective order, alleging that he found glass in his food and claimed that Karine assaulted him.

Karine and Paul both dropped their protective orders and appeared to have reconciled as they celebrated their anniversary together.

According to The Blast, Karine and Paul have been fired by TLC and will not return on 90 Day Fiance or any of the spin-off series.

The couple was cast on the 90 Day Fiance spin-off Happily Ever After Season 5, but they did not appear in the Tell-All event as their domestic issues began to surface when the reunion was being filmed.

On 90 Day Fiancé: Happily Ever After?, the couple moved from Brazil to Paul’s hometown of Louisville, Kentucky. After Paul failed to secure a job as promised, Karine demanded that they move back to Brazil.

In a lengthy statement, Paul claimed that Karine’s green card was stolen and the embassy is closed due to COVID-19. The 37-year-old added that the couple will welcome their second child, Ethan, in February 2021 and he will probably be born in Brazil due to their current inability to travel back to the U.S. 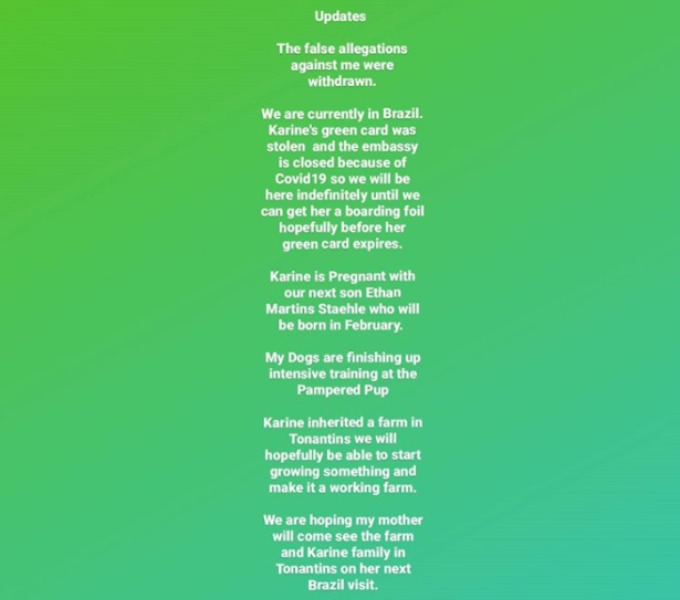 Karine also inherited a farm in Tonantins where the couple currently resides.

Paul released a statement on his Instagram Story describing the allegations that Karine filed against him earlier this year as “false.” He went on to blame fans for the abuse allegations made against him by Karine.

“Because of the overwhelming impact of fans taking upon themselves to pick Karine up and then make false allegations in her name acting as a translator and keeping her in their home until another Brazilian she knew from a church group rescued her and got her out the house. We will probably no longer be filming,” Paul wrote. 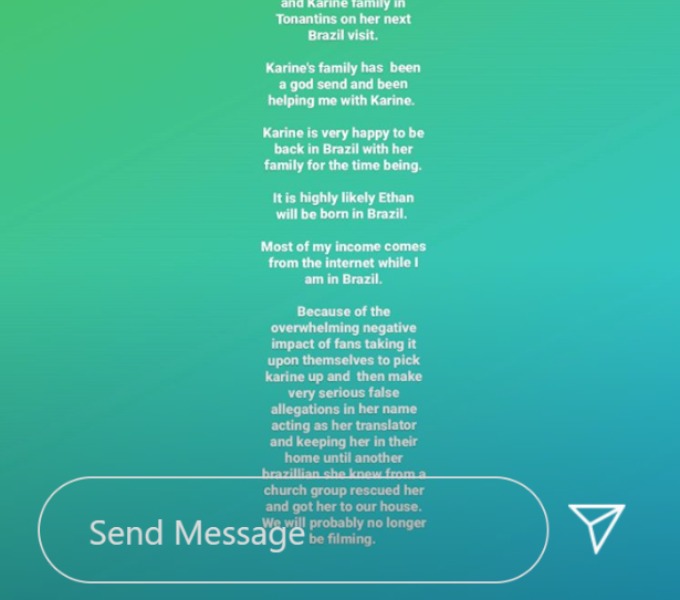 This latest statement by Paul contradicts Karine’s earlier claims when she clarified that she was never missing and filed for the emergency protective order. Karine also claimed that she was in fear for her life and was rescued. 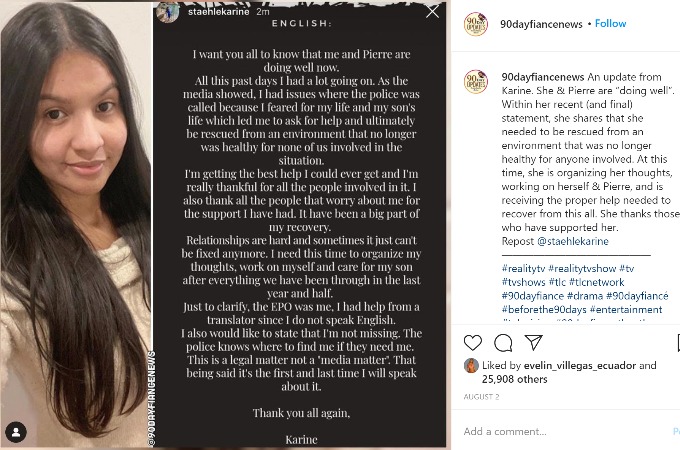 Paul and Karine are currently in Brazil and appear to have reconciled. Karine has not publicly corroborated Paul’s version of events surrounding the domestic abuse allegations after withdrawing the protective order.