Alamo Drafthouse Los Angeles is a long time coming. Initially targeted for 2015, CEO Tim League had to scale back his own big-format ambitions to make it work. Now, it will finally open with a soft launch July 20 at the downtown Le Bloc shopping mall on Seventh and Flower. The 12-screen multiplex (one more screen than Alamo Drafthouse Raleigh) is the 40th Alamo theater. Team Alamo’s task: to lure moviegoers to a new theater complex. It shouldn’t be hard. LA is a notoriously under-screened city, and the Regal Cinemas a few blocks away are doing gangbuster business. 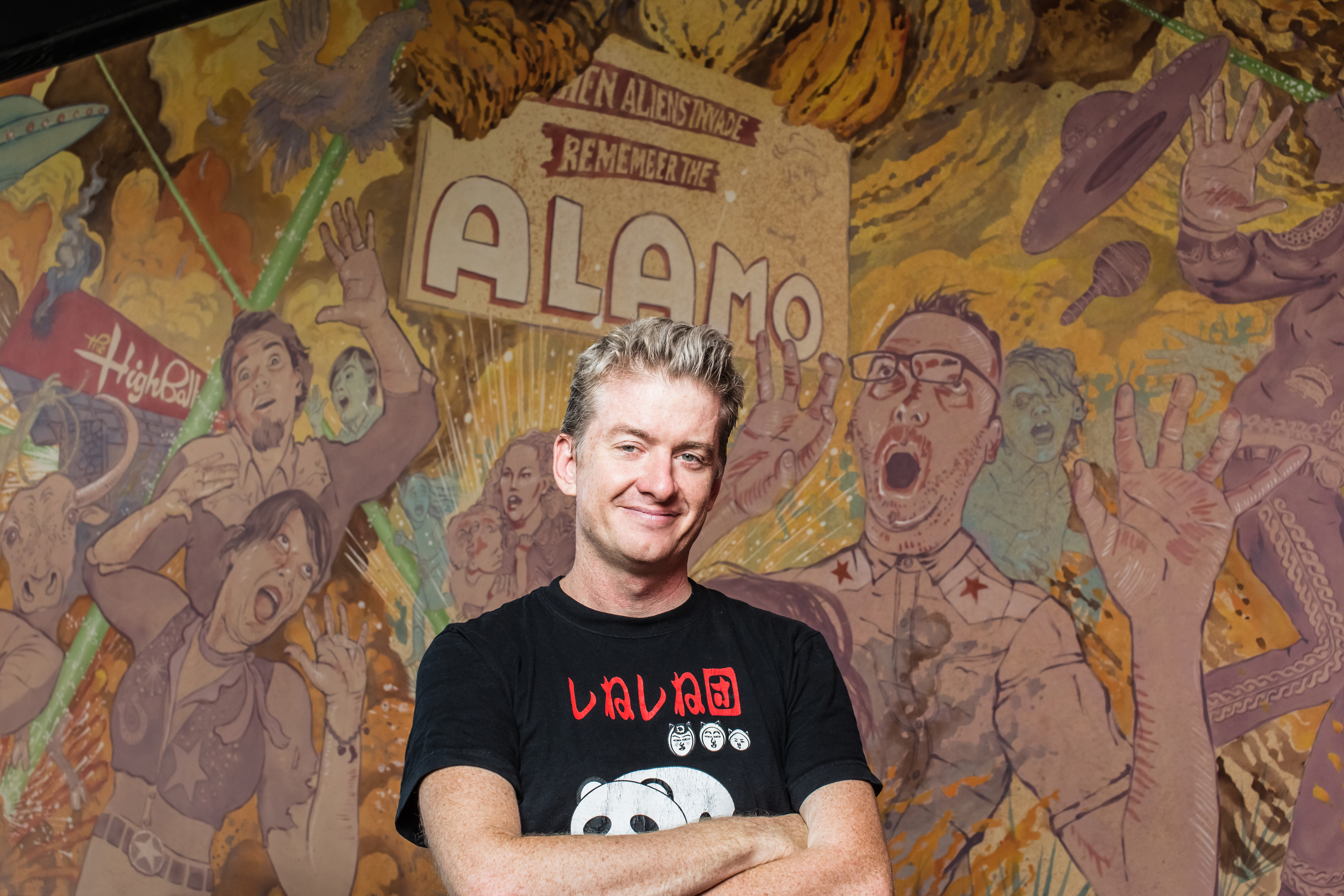 Crucially, Le Bloc sits above multiple Metro lines fanning out from Long Beach to Santa Monica. And, typical of Alamo, the cineplex is more than just a place to watch movies; it’s designed to lure locals to hang out at the location. The Video Vortex lobby is crammed with distractions: custom Mondo Hollywood posters, enamel pins, Alamo shot glasses, and rainbow pride T-shirts (proceeds go to local LBGT charities) as well as a 45,000-title DVD and Blu-ray library, videogame arcade, and tables for board games and puzzles.

Then there’s the full-service bar decorated with vintage VHS covers and lobby cards, offering custom cocktails (check out the Inherent Vice and True Grit), 48 beers on draft (with an American craft beer focus), a sophisticated wine list, and an expanded bar menu. Bar director Matthew Blackburn is aiming at a more refined palate in L.A. than the older Alamos, he said: “I am confident we will satiate them.”  (Hours are 11 AM-midnight weeknights, 11 am to 2 AM on the weekends.)

Of course, Alamo also is happy to rent out the space for premieres and events and board game releases, tournaments and parties, podcast recordings, variety, and interactive shows. It will also add curated video screenings, TriviaDome and karaoke nights. “We’d love to be a neighborhood bar with great drinks and a huge beer selection,” said League.

Acting as tour guide, he leads me up the escalator through a maze of hallways decorated with custom wallpaper depicting the innards of a 35mm projector, as well as his stunning poster collection leaning into martial arts, sci-fi, and exploitation films — giant Italian spaghetti western posters, French one-panels, and one-, three-, and six-sheets (“The Four Horsemen of the Apocalypse,” “Straw Dogs,” “Black Caesar,” “The Fog,” “Scream of Fear!”), as well as two custom-made full-size figures of the twin girls in Stanley Kubrick’s “The Shining” (a gift outgrown by his seven-year-old twins). League also maintains a film archive of some 4,000 features and trailers. “We loan out more films than the Academy,” he said. 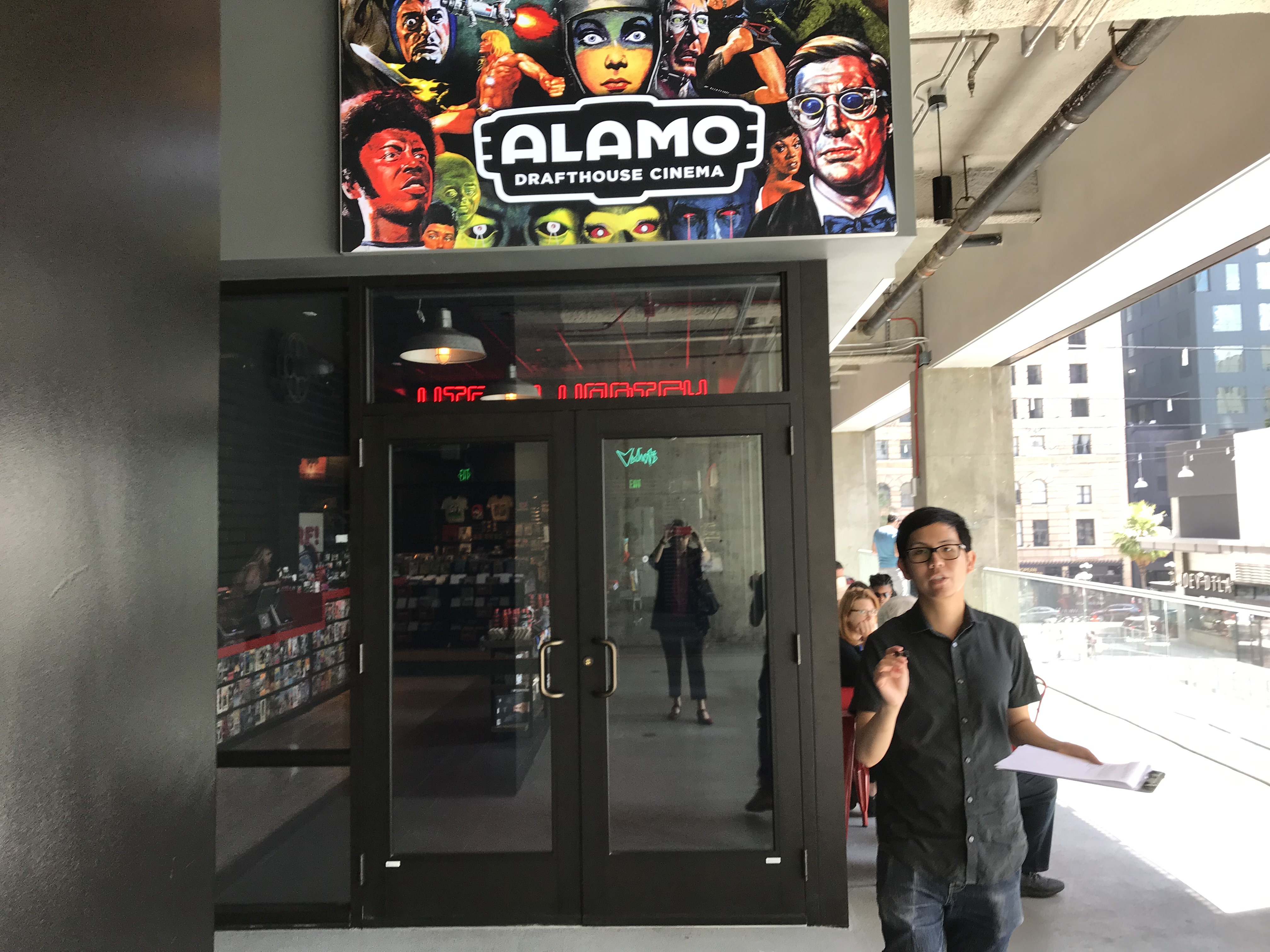 The 12 theaters, which contain a total of 569 plush recliner seats and food tables, come equipped with Barco 4K Laser projectors and simulcast technology for Alamo chain premiere Q&As. After a discounted first week, which will feature “Midsommar,” “The Lion King,” “Booksmart,” “Hail, Satan?,” “Do the Right Thing,” “Apollo 11,” “Slut In a Good Way,” and “Spider-Man: Far from Home,” the theater opens for real July 26. The kitchen has 15 fast-order cooks delivering Alamo’s Tex-Mex standards as well as truffle-oil popcorn, vegan buffalo cauliflower, and the famous “Royale with Cheese” Burger.

The new programming kicks in with “Once Upon a Time in Hollywood” July 26, with a 35mm print unspooling in the biggest 63-seat house. (In honor of the new Tarantino, Alamo will also showcase old Burt Reynolds films.) Upcoming titles include “Fast & Furious” spinoff “Hobbs & Shaw,” Jennifer Kent’s “The Nightingale,” Gurinder Chadha’s “Blinded by the Light,” and Austin auteur Richard Linklater’s “Where’d You Go Bernadette?” League is also the cofounder of Neon, and Alamo will play Neon titles like Cannes prize-winners from Bong Joon Ho (“Parasite”) and Celine Sciamma (“Portrait Lady Fire”).

Alamo also puts on special Terror Tuesday, Weird Wednesday, and Midnight Creep repertory shows that League calls “movies too outrageous for prime time.” Ticket prices for all-reserved seating range from $15 matinees to $17.50 weeknights and $18.00 on the weekends, with a $1 upcharge for 35mm.

“We wanted to showcase a pretty diversified slate,” said League. “You’ll see that mix played out with a larger screen count than we normally have. Obviously, we will play the Tarantino, which we will open in 35 mm, which was important for us to do. We considered playing 70mm here, but we couldn’t do it. It would have to be a 45-foot screen.”

Rachel Walker, Alamo Drafthouse Los Angeles’ head of creative and programming, sees “nothing but blue-sky opportunities.” Ted Mundorff, head of the rival indie Landmark Theatre chain, agrees. “I think it’s going to do very well,” he said. “When you build a theatre it’s a huge risk. You’re putting down a lot of money, and there are no guarantees. But Alamo continues to select good sites, and this is one of them. Downtown has an untapped clientele, and Alamo will be able to grab them. And folks downtown will like the beer vibe.”

Ideally, L.A. patrons will learn to show up early for Alamo’s half-hour of curated vintage trailers and other content, with plenty of time to open a tab ahead of the movie and order food and drinks for at-seat delivery, with a credit card tally at the end. “Expectations are high,” said veteran general manager Leslie Newell. “There are a lot of people in L.A. to impress.”

Over decades of experience, League has learned what works. There’s a Victory Loyalty program as well as his signature Alamo programming mix, which isn’t precisely specialized, repertory or tentpole. “We fuse all movies together,” said League. “We play and love all three: ‘The Avengers’ and ‘Star Wars’ as much as Godard and Takashi Miike and Ari Aster. It boils down to the question of, ‘Why go to the cinema?’

“It’s tied to the conversation about streaming services,” he said. “I take it real seriously. It’s my duty and obligation as a cinema owner. If anybody makes an investment in time and money to come to my place, I want them to have a really special time that will convince them to come back another time and be loyal. So I take that relationship with the consumer seriously. That drives a lot of what we try to build in the cinema, the free video store in the lobby, providing unexpected little moments of delight not included in the ticket.”

Alamo LA is not looking to open the two-theater exclusives that go to the bigger screens at the Landmark on Pico and The Arclight on Sunset. “We’ll get them when they expand within the LA market,” said League. “I can’t give eight screens to ‘The Farewell’ to give them a great opening weekend. I’m totally happy coming in when the distributor is ready for us.”

L.A. will also represent an expansion of League’s Video Vortex concept, established at four other Alamo outlets. Visitors can borrow — for free — from a 45,000-title collection of DVDs and Blu-rays that were culled from closed video stores. (Rules here.) Organized by genre, customers are encouraged to sign up online. Alamo is also digitizing rare VHS titles as part of its archival efforts. “Who’s to say video stores are dead?” said League. “There have to be ways to reimagine them as a resource of amazing movies available to people. There are not a lot of us who believe in that.”

On the other side of the equation, Alamo is open to playing Netflix movies, although it “would prefer to find common ground on an exclusive window,” League said. “We have no philosophical issue with playing Netflix. It has to be the right one, a big-screen experience where I can add value.”

Next up: a planned expansion for the Brooklyn theater as well as new Alamo sites in Manhattan’s financial district as well as a Staten Island Alamo with a kung fu-themed Video Vortex. The cookie cutter theater chains — playing “The Lion King” on every screen they can — could learn a thing or two from Alamo’s playbook. “We are always innovating, not on our heels,” said League. “We give a shit about what we’re doing.”