An intense and violent look at war in Angola is undone by the slick, “Grand Theft Auto”-style animation aesthetic 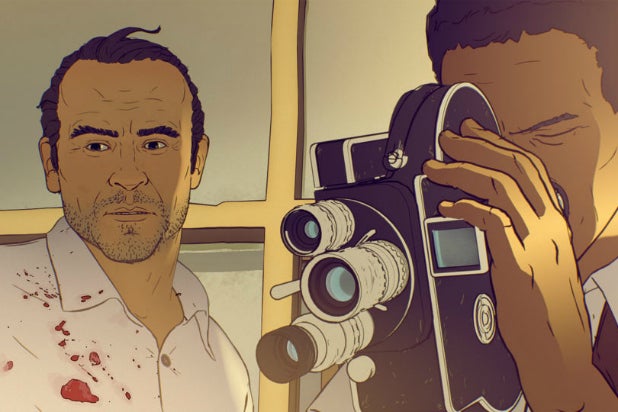 Raúl de la Fuente’s and Damian Nenow’s adaptation of Ryszard Kapuściński’s “Another Day of Life” isn’t the first film to combine documentary footage with animated reenactments, but it may be the first one that’ll make you wonder when the tutorial mission will begin, and you can finally start playing along for yourself.

“Another Day of Life” dramatizes three months of journalist Kapuściński’s life in Angola, in the midst of a violent Civil War. The streets were literally clogged with dead bodies, and foreign powers worked their insidious influence from the sidelines in an attempt to maintain their power in the region.

Into this “Cold War chess board” arrives Ryszard Kapuściński (voiced by Miroslaw Haniszewski, “The Informer”), a Polish reporter who usually goes by “Ricardo,” who takes it upon himself to tell the world what’s really happening in this chaotic corner of the world. His goal, he decides, is to journey through the firefights and interview an MPLA (Popular Movement for the Liberation of Angola) soldier and figurehead named Farrusco (Tomasz Zietek, “Silent Night”), who he believes can shed light on a story of global significance, which nobody seems to be reporting.

The directors animate most of “Another Day of Life” with a CGI, cell-shaded style that’s most commonly associated with popular video games like “Grand Theft Auto.” The aesthetic isn’t just superficially distracting; the problems run deep. The characters in the film physically articulate themselves in specific, clean strokes that make them feel more representational than real, and they all sound like they’ve been recorded in the same soundproof room.

Although Haniszewski, in particular, gives a complex vocal performance, the technique generally makes private moments between the film’s characters feel brash and perfunctory. Too often the actors’ delivery seems just plain loud by default, even though the actual topics of conversation — about subjects ranging from journalistic ethics to travel plans — hardly call for it. These characters look and sound and feel, more so than in many other animated films, fake. That’s not generally the effect one looks for in telling a true story.

Of course “Another Day of Life” isn’t exactly aiming for accuracy: The animation sometimes segues with eery, almost liquid elegance into haunting dream imagery. These scenes of ghostly figures, cities collapsing and floating bullets are undeniably striking. They sometimes oversell, to a borderline absurd degree, the inner strife of our narrator, perhaps at the expense of the Angolans whose story he’s technically supposed to be telling. But without them, the film would look like it never left got past the first level.

Raúl de la Fuente’s editing also intercuts footage of modern-day Angola, sometimes as a dramatic contrast, but at other times parallel with the animated scenes. If the goal was to imply that the animated perspective of the film coexists with live-action documentary images, it probably would have been a good idea to leave glaring anachronisms like laptops on the cutting room floor. Though challenging, too often the technique befuddles the mind instead of engaging it.

As powerful as the subject is, as harrowing as the violence comes across, “Another Day of Life” also struggles to find a dramatic anchor. The moments tantalize, the history shines a light on some very bleak realities, and yet the journey to Farrusco doesn’t greatly alter our perception. And when Kapuściński finally reaches the film’s grand ethical climax, staring at a Telex and debating whether to type the actual news or a lie of world-changing significance, you realize just how far he hasn’t come.

Kapuściński never seemed the selfish type. He took risks but he never knowingly sacrificed his integrity or the lives of others to get his stories. It would be like hingeing an entire motion picture on whether Superman will save a school bus full of children or write a front-page story about how they died.

“Another Day of Life” feels like it’s supposed to be a vital and important motion picture. It’s ardently sincere and absolutely convinced of its social and historical significance. Frankly, it’s frustrating to report that surface elements like unrealistic ADR and plasticky CGI styles can have such a detrimental impact on an ambitious documentary-animation hybrid. But it would be disingenuous to pretend that they don’t. They simply and frequently get in the way of our genuine emotional involvement with a film about death and sacrifice and moral quagmires, subjects that should make us feel everything instead of just slightly empty.

But even if the form perfectly complemented the function, the tricky structure of Kapuściński’s story might still have made the film feel aimless and, in the end, anticlimactic. Kapuściński is clearly the hero of “Another Day of Life,” but his tale doesn’t fully resonate because the storytellers are hesitant to interrogate him about his motives and responsibilities and perhaps, if only for a moment, to find him fallible. It’s hard to tell a story about ethical conundrums when it’s easy for both the audience and the protagonist to navigate the debate and arrive, in the end, at the same, clear conclusions.