It’s been 18 years since Freddie Prinze Jr. made his last “Scooby-Doo” appearance, but the beloved ’90s teen star has still yet to solve the mystery of how to be a convincing actor. Not to sound like a total Scrooge, but Netflix’s “Christmas with You” is such a woefully by-the-numbers approach to the holiday rom-com that it forgets the most important ingredient: it even lacks the spirit of Christmas itself.

In Gabriela Tagliavini’s film, Prinze stars as Miguel, a single dad music teacher whose talented singer daughter Cristina (Deja Monique Cruz) uploads a rendition of pop star Angelina’s (Aimee Garcia) hit track on Instagram. Angelina’s own flailing music career hinges on a Christmas hit, all the better to mimic Mariah Carey’s career (this is an actual reference in the movie) but Angelina just can’t tap into the holiday spirit, as she’s reminded at every time that she’s no longer relevant.

Well, that never gets resolved. Instead, Angelina tracks down Cristina and eventually enlists Miguel to help write her ballad.

The only thing that happens in this bland, mindless movie are multiple drawn-out dance sequences, including an opening number that would make “A Star Is Born” Ally’s cringe-y “SNL” performance look like the VMAs. “Christmas with You” would be forgivable if it seemed like the cast was having fun behind-the-scenes, or even trying onscreen. It’s only Cruz’s upbeat attitude that makes “Christmas with You” remotely tolerable, and even then the young actress is grossly underused.

Pop star Angelina’s plight is that she’s a “perfectionist” and therefore a hardcore career woman who gave up her chance at true, non-public relations mandated love. While Angelina pretends to still be in a relationship with her ex, famous telenovela actor Ricardo (Gabriel Sloyer), she faces a “Girls5Eva” problem: Her music is being sampled by someone younger, and label manager “Billion Dollar” Barry (Lawrence J. Hughes) is threatening to downgrade her on his roster. She just needs a Christmas miracle to fix her “outdated” TikToks and bad Bumble profile so she can publicly dump Ricardo for good.

Too bad this movie has no magic whatsoever to help her on that quest. 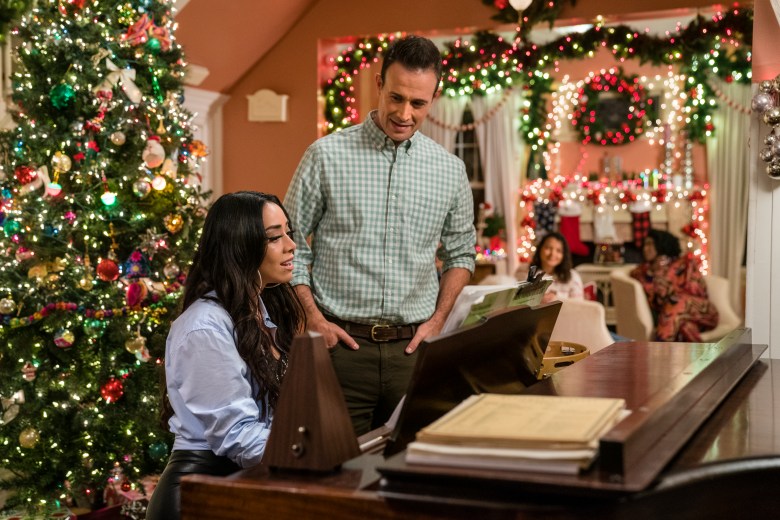 “Christmas with You” is not an escapist holiday fantasy like the best, most lovable holiday-time fare that is as easy to consume as sugar cookies. Nor does “Christmas with You” offer any kind of career comeback for Prinze, like Lindsay Lohan’s surprisingly perfect, smart festive rom-com “Falling for Christmas.” Instead, “Christmas with You” is clunky and cranky, making half-hearted digs about “lettuce diets” and pretending to be cute by having Angelina munch celery kept in a decorative vase (girl, those stalks belongs in the fridge).

The plot is part “Marry Me” and part Hallmark holiday movie, although the cable network films seem to, on average, have higher stakes. And even “Marry Me” star Jennifer Lopez herself is referenced in this trying-to-be-cute meta moment, with Angelina mentioning that she missed out on her own quinceañera while working as a backup dancer for Jenny from the Block back in the day. As if J.Lo would employ children on tour?! Miguel even is a school teacher, just like Owen Wilson’s “Marry Me” character. We’ve all done this before, but no one can touch Lopez’s onscreen charisma, singing, and dancing chops, so it’s not even a comparison, even with Garcia’s theater background.

Angelina is dead set on getting “Beyoncé numbers” on social media and is told that her “outfit is fire” by multiple people. The script, penned by Paco Farias, Jennifer C. Stetson, and Michael Varrati, feels like a Mad Libs take on “modern” lingo, immediately making “Christmas with You” blandly obsolete itself. The moments that try for real emotion include Angelina bonding with Miguel’s daughter Cristina over both having dead moms (the key to any good Christmas movie, as we’re told by the NCU aka Netflix Christmas Universe). There is no spark between Miguel and Angelina, even with a sensual tamale-making, devoid of any spice. 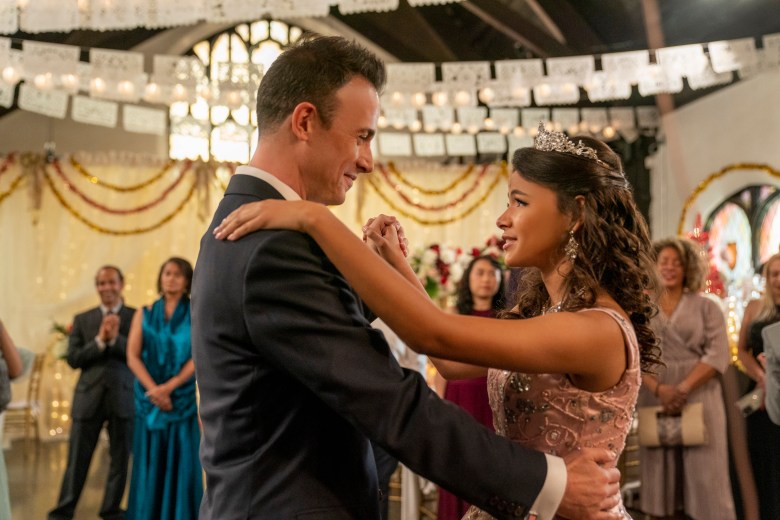 In fact, the least fake attempt at real love in this film is shown between Miguel and Cristina, culminating in her quinceañera. When the climax of your holiday rom-com has nothing to do with romance or Christmas, there’s a problem. “Christmas with You” is almost unwatchably dull, solely sparking the desire to fast-forward through the out-of-touch jokes about selfies and Milan Fashion Week to remind us that Angelina is famous and ask, aren’t we having fun yet?!

Not even Santa Claus can save “Christmas with You,” and he wasn’t invited to make an appearance in this cheerless reminder that sometimes it’s better to have a Silent Night than a crappy movie.

“Christmas with You” starts streaming on Thursday, November 17 on Netflix.