“No need to worry about President Trump finding out, because he has no interest in fruit” 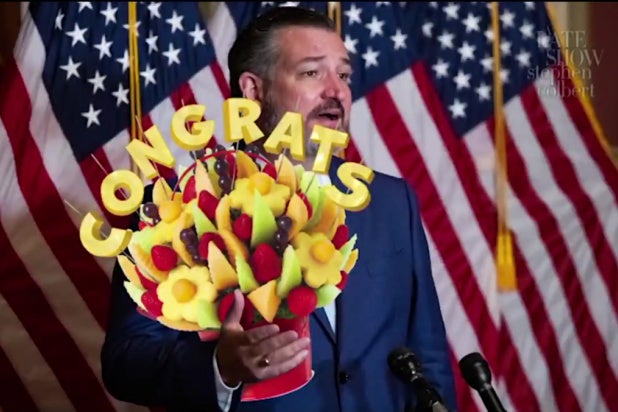 “The Late Show With Stephen Colbert” opened its latest episode Tuesday night, as it usually does, with a little cold open skit mocking those Republicans in Congress who are still acting like Donald Trump has any kind of chance at remaining president.

The thrust of the “Colbert” skit is that these Republicans need a secret way to offer their congrats to Joe Biden for winning the election that Trump won’t be aware of.

The solution? A fruit basket from Edible Arrangements. Which Trump won’t notice “because he has no interest in fruit.

As always, the “Colbert” skit began with a little piece of a news report to ensure that viewers get what the joke is about. In this case, we see a cable news anchor talking with Sen. Joe Manchin.

“There are a number of your Republican colleagues in the Senate who still have not acknowledged, even after yesterday, that Joe Biden is the president-elect. I mean for god’s sake Putin even did so overnight,” the anchor said.

You can watch the skit in the video below.

After that brief catch-up, “The Late Show With Stephen Colbert” quickly got to the jokes.

“Has the electoral college submitted their votes, and now you have no choice but to acknowledge President-elect Joe Biden, but are still afraid to do so?” the “Colbert” narrator asked.

“Well, how about an Edible Arrangement? Fruit is the perfect way for a coward to say congrats. Because after it’s consumed, there’s no evidence.”

The narrator then suggested these Republicans try one of a few fruit baskets tailored to their present situation.

“Choose from such faint-hearted arrangements as the ‘Gutless Guava.’ Time to ‘Mango Up and Admit It.’ And the ‘Grow-a-Pea,’” the “Colbert” narrator said. “And no need to worry about President Trump finding out, because he has no interest in fruit.

“So let fruit say the thing you don’t want to, because orange you’re glad you didn’t have to say it? Edible Arrangements, for when you don’t want to admit your candidate was beaten to a pulp.”