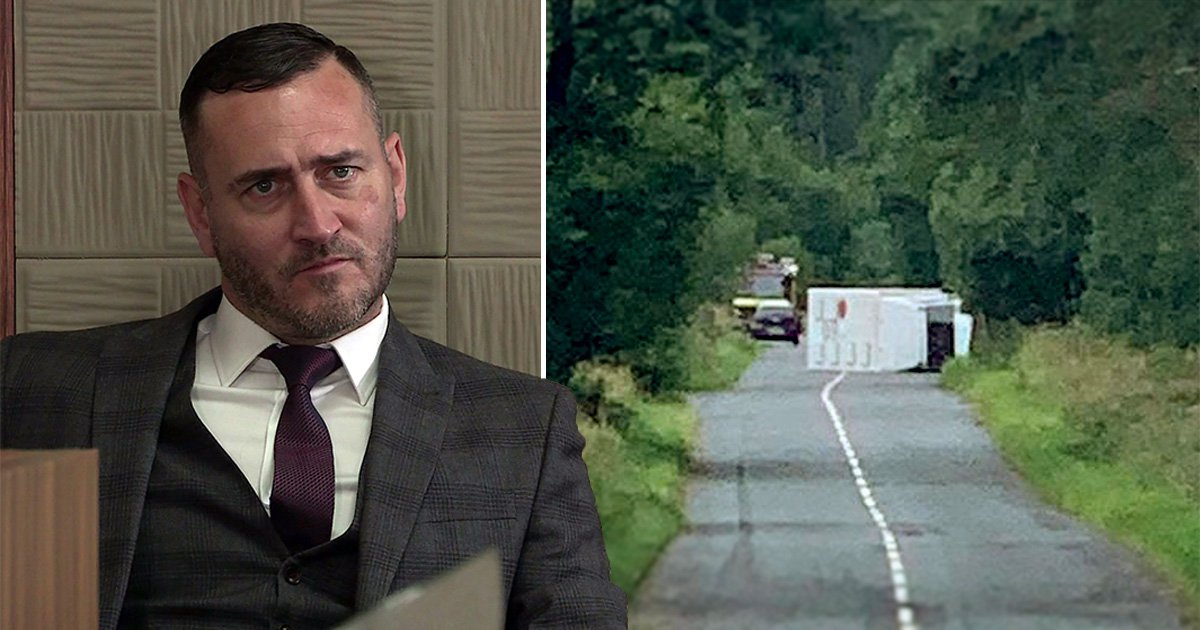 A prison van has been pictured being overturned in the road in an upcoming scene of Coronation Street, leading to speculation over who’s involved in the explosive scenes.

At the end of last month, Will Mellor was spotted filming dramatic new scenes for Corrie, confirming his return as the evil Harvey Gaskell.

While it’s uncertain how Harvey will re-enter the story, the new photo of a prison van crash could mean that an escape is on the cards for the notorious drug lord.

The picture was taken last week, while filming was taking place on Stones Bank Road between Darwen and Bolton.

The photographer, Tim Melia, explained that he captured the photo at 12.20pm on Tuesday August 24, telling LancsLive: ‘I was chatting to the security guard on the road and we were speculating about the storyline.

‘It was a crashed prison van in Stones Bank Road, they closed the road while they were filming and wouldn’t let anyone past.’

If Harvey is the individual in the van, and manages to escape captivity, he could end up setting on a warpath to kill Leanne Battersby (Jane Danson), as he previously threatened to do so.

Harvey made it abundantly clear that if Leanne gave evidence against him in court, that her life would be at risk.

Nonetheless, she went ahead and gave the evidence anyway, which could mean she’s at the top of Harvey’s list for revenge.

However, the prison van could also be related to the court trial currently taking place on Corrie, as Kelly Neelan (Millie Gibson) tries to prove that she was framed for the murder of Seb Franklin (Harry Visinoni) by Corey Brent (Maximus Evans).

In new Corrie scenes, Nina Lucas (Mollie Gallagher) – who was also implicated in Seb’s death – took to the stand at the trial, telling the court that it was Corey who kicked Seb to death, not Kelly.

When contacted by Metro.co.uk, ITV said that it wouldn’t comment on filming or any storylines for Coronation Street.