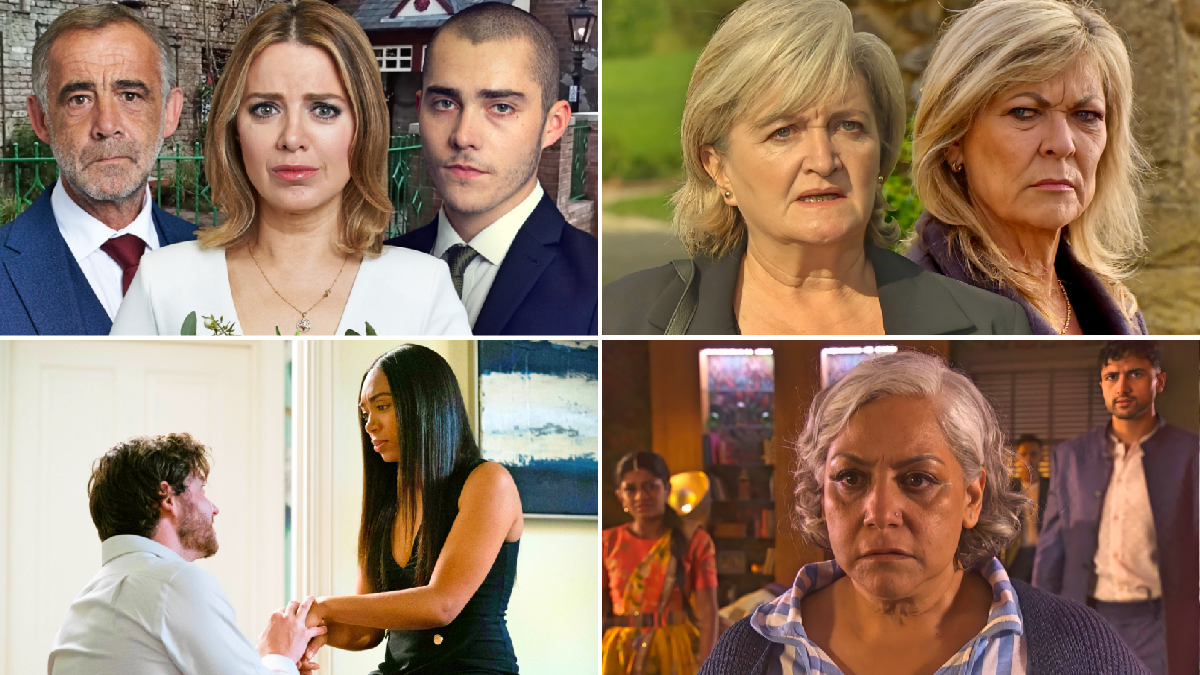 Marriage is in the air in soapland next week, as some prepare to tie the knot, while others get down on one knee.

Abi Franklin’s big day is at the centre of plenty of drama in Coronation Street, as Debbie Webster confronts her about her plot to murder Corey Brent. Abi promises to leave Kevin ahead of the wedding, but will she go through with her plan?

Or will the couple say ‘I Do?’

Kim Tate gets a huge shock in Emmerdale when Andrea’s mum shows up in the village, and Hollyoaks sees Misbah Maalik open up about her past with Ali Shahzad.

It’s a week that will change everything for many, and not one we recommend missing, but if you simply cannot wait to see it all for yourself, then here’s a selection of just a few must-see moments.

Abi leaves Jack with Debbie. Jack reveals that he’s concerned Abi is going to kill Corey. Debbie reads the letter Abi left for Kevin on the eve of the sinkhole collapse, and demands an explanation. Abi begs them not to breathe a word, but Debbie gives her an ultimatum: end things with Kevin or she’ll tell all!

Kevin returns home to find Abi packing her bags. Abi explains how she stole his money and bought a gun, intent on killing Corey, but confirms that Nina talked her out of it. Kevin is stunned, and later he finds Abi in Seb’s memorial garden. He tells her how much he loves her, and begs her to meet him at the hotel where he’ll be waiting to marry her. But will Abi turn up?

Corey demands Stu hand over the contents of the backpack, but Stu feigns ignorance. Nina, meanwhile, tells Abi that they’ve come into possession of Corey’s blood-soaked clothes, and they’ve handed them into the police! At the wedding, Nina interrupts, revealing that DS Swain has confirmed they’re re-opening the case, and going to arrest Corey!

Stefan has a plan to get Corey to safety. Abi, meanwhile, persuades Gary to help her track down Corey and Stefan. Gary sets off for Stefan’s office in search of Christian – Eli’s dad. Stefan orders Corey to pack his things as Christian is on his way with a van and some cash. Stefan and Corey climb in the back of Christian’s van, as Stefan explains to Corey his plan for them to leave the country where he can start a new life with a foreign club. Corey’s pathetically grateful, but suddenly the van draws to a halt. Will Corey get away?

Curtis has an exam and Steve offers him a lift. When Steve’s car fails to start, Curtis gets out and gives it a push, but soon enough, Curtis sinks to his knees, clutching his chest. He plays down the seriousness of his situation, assuring Emma all he needs is rest and he’s free to go home. But back at the flat Curtis has a shock proposal for Emma.

Kim holds a memorial service for Andrea, but it’s clear she’s only doing so in the hopes of Jamie returning to the village. Will returns for the service, and he’s not the only surprise guest, as Andrea’s mum Hazel rocks up with a shock revelation for Kim! Millie makes a decision to live with grandma Hazel, leaving Kim heartbroken, as she realises Jamie must be gone, and now she’s lost Millie too.

Charity and Mackenzie prepare to rob Chloe’s house, and after clearing a display case of watches, they stumble upon a maid – it’s Kerry! Chloe arrives home, and thus Kerry covers for them. Kerry warns Mack and Charity to not mention that they’ve seen her, and orders them to never return.

Liam’s allotment has gone viral, with some assistance from Amelia. A journalist shows interest, and Amelia rallies the village youth to step in and help. Liam is soon able to declare the ‘Leanna Cavanagh Good Mood Food Allotment’ open.

Chelsea barges in to No. 1 and finds Gray overcome with emotion. Whitney, feeling guilty, shows up to attend his dad’s funeral, but Chelsea informs her that she will go to the service with Gray. Afterwards, Gray breaks down, and Chelsea comforts him. A little bit tipsy and very emotional, Gray asks Chelsea to marry him!

Stacey tries to convince Jean to let Eve stay. She comes up with an idea and her and Eve approach Suki. Suki is fuming at the prospect of not being able to evict the Slaters. Later, the ladies tell Jean what happened but when Stacey departs, Jean firmly orders Eve to leave. Stacey soon realises Eve is gone!

Vi tells Rainie that Jonno has sold all her things, but insists that Stuart doesn’t find out. Stuart, however, sees all of his gran’s things on Billy’s stall. He confronts Vi, who reveals everything. When alone, Vi starts to look through her belongings, but she’s panicked when she cannot find an antique children’s book. Billy confirms he sold the item to Kim. Vi wants it back, but Kim refuses to part with it. Patrick, meanwhile, looks closely, and finds an interesting photograph in the book.

Shaq suggests that Misbah should give the introductory speech at the hospital ball, which will see Ali commended for his latest research grant. Will Misbah be able to stick to the script? Misbah slowly comes to terms with the devastating events of her past, as the truth is revealed via a series of powerful flashbacks. Misbah snaps in the middle of her speech, leaving the ball. Yazz confronts her mum, and it appears as if Misbah might be finally ready to open up.

Juliet and Peri are approached in the park by a stranger, who knows a lot more about the lovers than one should. The true extent of Bluebird is set to be exposed, it would seem!

James struggles to juggle the revelation and the merger of Dee Valley Law, but there’s more trouble ahead, as he comes face-to-face with the aforementioned stranger, whose name is Mikey. Mikey, however, is also the son of his new business partner! The question is: just how far will James go in order to protect his sister? And what will it cost him?