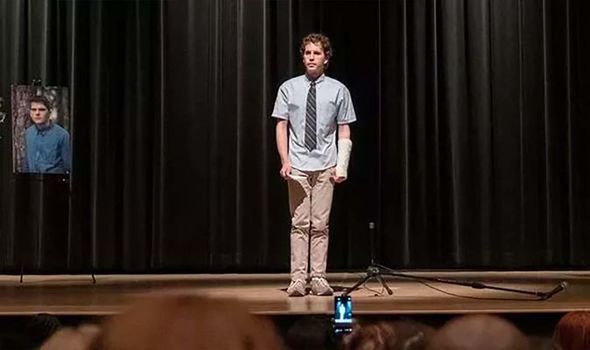 Sadly, his pasty make-up is even less convincing than the potion from Boss Baby 2. Evan could be the only kid in his school who doesn’t need a fake ID to enjoy a drink, but he still cuts a miserable figure in the school canteen.

A collection of nervous ticks and mysterious flashbacks, Evan’s therapist has tasked him with writing a letter to himself every morning, outlining his goals and hopes for the coming day.

Stupidly, Evan prints one out in the school library, where it is stolen by Connor (Colton Ryan), an angry misfit who has troubles of his own.

A few days later Connor takes his own life. His parents find the letter and assume their son penned the confessional to a friend.

Eager to console his distraught parents (Amy Adams and Danny Pino), who are relieved that Connor had at least one confidante, Evan goes along with the deception.

There are a few decent show tunes but the story never explores its dark set-up, making Evan an outsider instead of a troubled anti-hero.

I never bought it. Like a grown man moping around a school locker room, Evan’s pursuit of popularity felt a bit too creepy for me.