Just when Emily (Lily Collins) began worming her way into viewers’ guarded, cynical hearts — her anti-feminist naiveté could be considered charming in a screwball, ironically patriarchal kind of way — the second season of Netflix’s “Emily in Paris” all but assassinated its titular character. Season 2 feels like being flung into an alternate Darren Star-helmed universe where Emily is no longer merely an inexperienced expat; she’s an idiot abroad.

And in 2021, is there anything more unlovable than an American with no remorse?

For all those who haven’t yet schlepped their luggage aboard — yes, Emily throws a tantrum in a luxury train car — here’s a little refresher on where Season 1 left off: Emily is resistant to learning French and immersing herself in the local Parisian culture. She also had an affair with local chef Gabriel (Lucas Bravo), jeopardizing her friendship with Gabriel’s girlfriend, Camille (Camille Razat).

What first was a revolving door of ill-fated lovers and romantic shenanigans gets a “girl power” push in the new season’s premiere. (In an ELLE cover story, Collins did warn that the series would have “more female camaraderie.”) But Emily’s idea of friendship apparently constitutes ignoring any wrongdoings or awkward secrets tied to your comrade and simply skating ahead as if all is well. Her concept of entitlement soon leads her to con her way into a free all-girls getaway by flirting with a man she doesn’t even like.

All of these choices, built from the year prior and emphasized in the early hours of Season 2, dampen what goodwill the series has coaxed for its star. Our empathy for Emily is waning, almost as though Star is baiting us to admit that Emily is in too deep… and definitely in the wrong. But rather than tearing her down to build her back up, “Emily in Paris” acts like its star and pushes forward blindly. A dash of nudity, some very real French smoking, and a new (very welcome) emphasis on Camille and Mindy (Ashley Park) proves that Emily is the most bland character in the series. 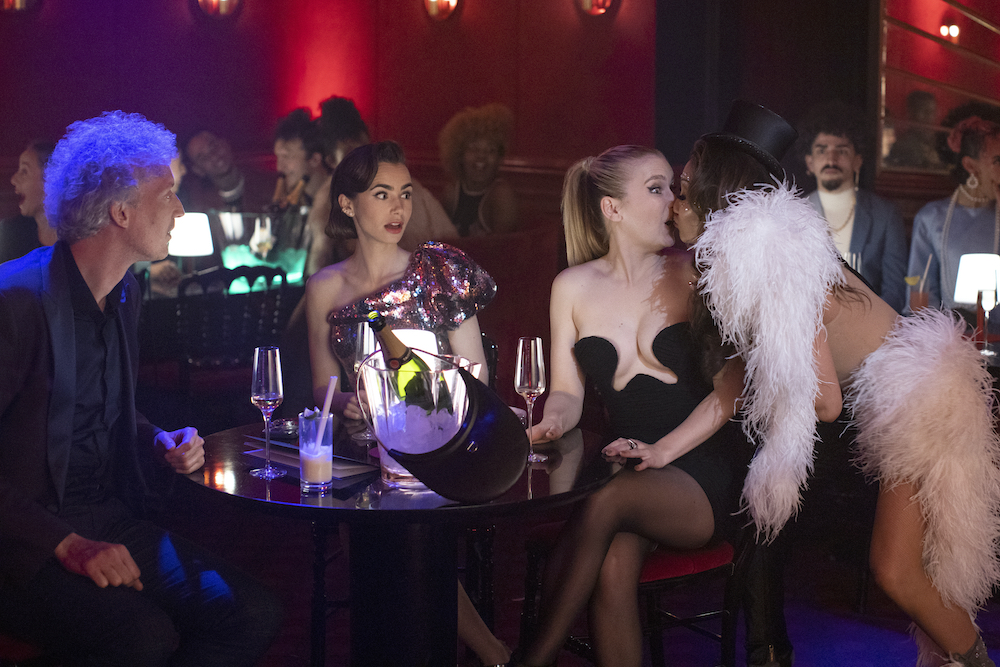 But are we supposed to resent our lead?

Collins, who is also a producer on the series, told NYLON that Emily is an embodiment of happy-go-lucky. “A lot of the qualities that Emily has, if you put them on paper, would seem so annoying,” Collins said. “To have someone be optimistic, bright, and bubbly — it’s sad to think that people would look and go, ‘That’s a lot.’ They’re such beautiful qualities, and the fact that she can partner that with being vulnerable and asking for help and making mistakes — she’s not infallible.”

But being fallible and being foolish are two different things, a disconnect made painfully obvious when Emily is forced to address her mistake of sleeping with Gabriel. Rather than justify her choice or apologize sincerely, Emily is the butt of the joke in this love triangle; Camille is more taken aback not by Emily’s brazenness to sleep with Gabriel, but that Gabriel falls for Emily’s immaturity in the first place.

“I won’t believe a word from you, nevermind the language,” Camille tells Emily at her office, after purposefully conducting a meeting in French so Emily couldn’t understand it. The series turns one of its main Season 1 criticisms — the condescension that an entire nation would bend to suit Emily, rather than her educate herself about France — into a major plot point for the second season. From Google Translate quips to a poorly-worded apology letter (“I’m very sorry you hurt,” the note starts before saying “I am sad that I am naughty”), Emily’s ignorance is the comedy.

“We never represented it as anything other than what it was going to be,” Collins said to Glamour. “People said they were laughing and smiling for the first time in a long time, that it reminded them of what fun felt like and that we were able to offer some escapism and romanticism and travel. I was so proud of that. I did not expect it to all of a sudden be something that people were upset [about].”

“And we do poke fun at America, too,” she said. “Emily is just as willing to mention things about where she’s from, and they joke about her as much as things are joked about her coworkers or the way of life there.”

But there’s such a resentment for Emily’s wide-eyed je n’ai sais quoi responses that even the characters in “Emily in Paris” don’t seem to have time for it.

“I don’t understand why you did what you did, just like I don’t understand a fucking word in your letter,” Camille writes back to Emily’s pathetic attempt at an apology. “Leave me alone, you illiterate sociopath.”

In that moment, rather than feel crestfallen for our forlorn lead or enraged on behalf of our proxy into this story, we’re just fine with Emily being called a sociopath, since she might actually be one. Lest we forget what a comically cringe “Jules et Jim” parody insinuates: that perhaps Emily is our new New Wave French icon. Oh, how doomed we are if that’s true.

“Emily in Paris” Season 2 is available to stream on Netflix.