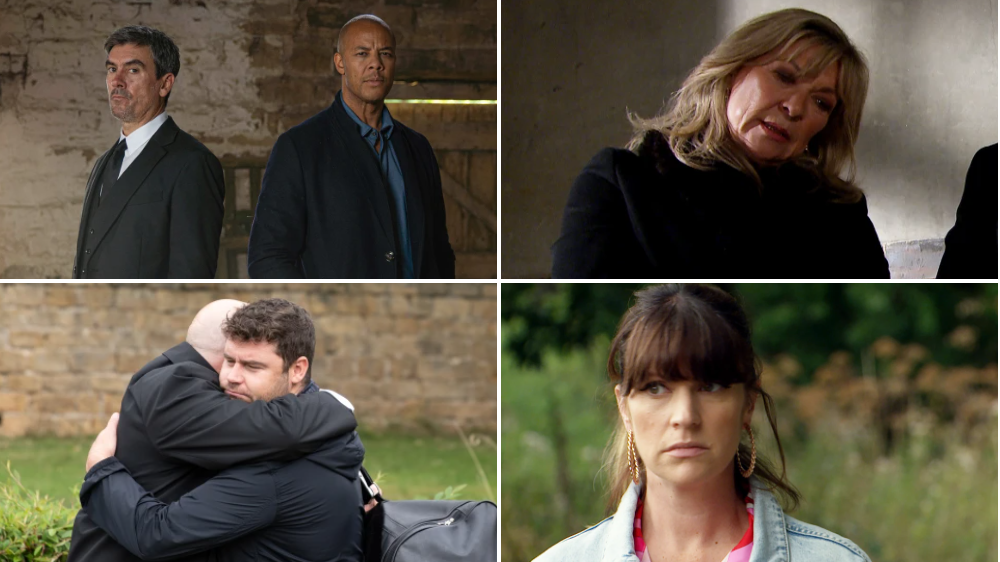 Hostages are taken and traps are set in Emmerdale next week, but who will live, and who will die?

Cain Dingle (Jeff Hordley) is murderous as he discovers that Al Chapman (Michael Wildman) has been sleeping with Chas (Lucy Pargeter).

Luring him to a barn, Cain points a shotgun at his nemesis and after a struggle, a shot rings out…

Meanwhile, Kim Tate (Claire King) and Will Taylor (Dean Andrews) are also in the kidnap game, as they hold Alex prisoner and things then take a violent turn.

With lives on the line, there is at least one departure from the village as Aaron (Danny Miller) says goodbye.

But at least he leaves alive, which is a concept that may be lost to others who remain in serious danger…

Chas holds her nerve as Cain questions her on her fallout with Aaron but when there’s a close call with Chas’ burner phone, Cain’s is suspicious. He’s in disbelief when he finds a string of messages from an unknown number revealing an affair on Chas’ burner phone.

He decides to call the number and oblivious to who is actually calling, Al answers. Cain’s expression darkens as he listens to Al’s voice on the other end of the call.

Filled with a mixture of anger and grief, Cain uses the phone to set a trap. Expecting to find Chas, Al is met with a steely Cain and the business end of a shotgun.

Meanwhile, when she realises that Cain has found her burner phone, Chas fears the worst. Cain holds Al at gunpoint, his utter contempt at Chas’ affair with Al evident.

As a cool Al’s confidence grows he starts to stride off but is caught off guard when Cain launches himself at him. Cain and Al begin to fight it out. And things get serious when the shotgun is grabbed…

Aaron gets ready to leave for good and says his goodbyes to Vinny and Paddy. When Chas questions him on what he’s revealed, Aaron coldly cuts off any future the two of them might have.

Kerry and Chloe are shocked to hear the crack of a gunshot ring out. What will they find?

Are Cain and Al alive?

When the money from Harriet’s will isn’t enough to keep their house, Billy and Dawn are daunted by the prospect of becoming homeless.

The couple form a plan to buy Woodbine for themselves until Alex threatens to take away Clemmie if he doesn’t get Harriet’s money.

As everyone sets off for Harriet’s funeral, Dawn’s anxious about Alex’s threats but her family vow to fight her corner. She hopes she hasn’t lied when she assures Clemmie that their family will stick together.

Alex is unphased when Will manhandles him, demanding he leave Dawn alone. But as Kim baits Alex to her car with the temptation of the money he’s after, he’s bundled into their car boot.

Having tied up Alex in Home Farm stables, Kim and Will negotiate a cheaper pay off. As they leave, fearful Alex is left to stew on the decision. At The Hide, Will tries to tell Billy about Alex but Kim heads over to shut it down.

Kim and Will urge Billy not to act on his aggression towards Alex. Keeping the hostage situation secret, Kim vows to keep her family safe. When a furious Will prepares to beat down Alex, Kim is impressed with his bravado.

After pummelling a bloodied Alex, Will composes himself. But with Alex remaining steadfast about his demands, a united and formidable Kim and Will leave him to suffer overnight.

Dan’s emotional when Amelia makes a heartfelt speech in honour of Harriet.

A drunken Dan worries about Harriet’s true feelings but Will comforts him with the lie that she was happy with him.

A shocking truth is told that could have devastating consequences.

Elsewhere, Kim and Will make their next move while emotions run high for Dan.