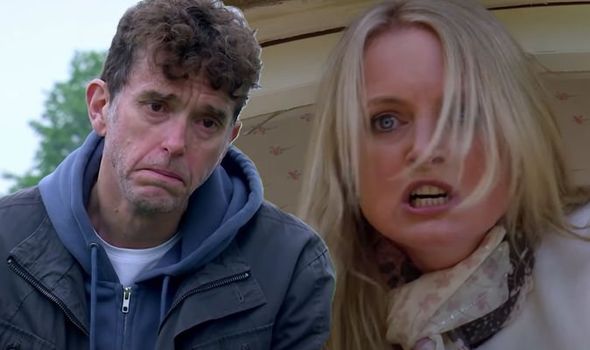 Emmerdale: Jimmy Kings warns Nicola he may not forgive her

For months, Jimmy King (played by Nick Miles) has been at war with ex-partner Juliette Holliday (Amelia Curtis) over the custody of their son Carl. The custody battle has led to the break down of Jimmy’s marriage to Nicola (Nichola Wheeler), tearing their family apart. But just as it looks as though Juliette and Jimmy were finally coming to an agreement, the former dropped a bombshell that could rock Emmerdale village.

In Friday night’s instalment, Juliette announced she’d been offered a new job in America and she needed to talk about custody of Carl again.

Understandably Jimmy was furious with the announcement and began to fear he’d lose his son.

As Jimmy was packing up Angel’s birthday party at the HOP, Juliette arrived with a bombshell.

“Jimmy, the lady at the cafe sad you were up here for a kids party,” she began. “It looks like it went well.”

“I need to tell you something,” Juliette continued. “Both you and Nicola as it happens.”

When Jimmy skirted the issue of Nicola being in a cell, Juliette continued: “Well you can tell her later.

“I’m leaving. I’ve got this job offer and well, actually, it’s in New York so I’ve got to take it.”

“Whoa!” Jimmy said clearly surprised by the revelation. “New York! What about Carl?”

Juliette told him: “Well, obviously we need to discuss that.”

Juliette asked: “Why has it always go to be this way with you?”

“Well why do you think?” Jimmy snapped back. “You can’t just lay like something like this on me.”

Jimmy ran off leaving Juliette behind and sought refuge in his car and it was clear he’s concerned he will lose his son.

With Jimmy refusing to talk to Juliette about Carl’s future, could she be forced to take drastic action?

While Jimmy and Nicola continue to argue over the state of their marriage in coming weeks, Juliette could plot to take Carl without their knowledge.

With the pair taking no notice of the children, Juliette could take Carl and head straight to the airport.

Jimmy would be devastated if Juliette took his son and as he is refusing to speak to her, he’d have no knowledge about her new job and where she’ll be living.

The stress could also put extra pressure on his relationship with Nicola and he could find himself cut off from his other children too.

Official soap spoilers have revealed Nicola and Jimmy will do all they can to convince Carl he’s wanted at their home.

But if they don’t make him feel loved enough, he could go willingly with his mum.

Jimmy and Nicola hope they’ve done enough to reassure him he’s safe and wanted but the next day they struggle with Carl.

Reluctantly, Nicola tells Jimmy he’ll have to move back in, but only for Carl. Jimmy is hopeful to be back home but is it short lived?