We are about to break a cardinal rule (two rules, if we’re being technical). We are going to talk about Fight Club. Yes, we know the handsome guy in the funky-ass thrift store outfits, with the spiky hair and Michelangelo-sculpted physique, specifically said not to talk about it. The last thing we want is a bunch of space monkeys showing up, threatening to snip away our manhood. Which, let’s face it, is why a lot of those guys, the stockbrokers and hospitality workers and cops and white-collar wageslaves, showed up to that dank, underground basement in the first place. They felt like their sense of manhood had atrophied, withered away to nothing courtesy of a society that had emasculated them. These guys found collective salvation through violence, a regained sense of purpose at the end of a fist. Then they decided to take it up a notch and take their rage out on other targets. Thankfully, that feeling totally went away and society was never, ever bothered by angry groups of dude bros again. The end.

[The frame starts to shudder. The celluloid nearly whips off it sprocket holes. A pornographic image of a penis subliminally flashes by.]

As we come up on the 20th anniversary of what’s considered a jaw-droppingly stupendous year for American filmmaking, it pays to single out David Fincher’s contribution to that annus mirabilis. Two decades ago today, after a premiere at the Venice Film Festival and countless arguments with studio executives, his adaptation of Chuck Palahniuk’s 1996 novel slipped into theaters. It was coasting on the strength of two movie stars — one newcomer with a few Oscar nominations already under his belt, another older one coming off a series of shaky leading man roles — and a hot director just starting to hit his stride. It caused a lot of handwringing while blowing a decent number of minds (its real rabid fanbase would discover it on DVD a few years down the road). Numbers-wise, it was considered a flop. Now it’s a modern classic. It cast a subversive shadow that looms large over everything from superhero movies to our current fucked-up political climate. It’s a cult movie, and a “cult” movie, that hit folks as hard it could and still continues to throw haymakers.

“[It’s] really about the process of maturing,” David Fincher told Film Comment back in 1999; reading Palahniuk‘s book, the filmmaker saw a late-Nineties equivalent to The Graduate, a skewed coming-of-age tale about being dissatisfied with your prefab future path and wanting to find an alternative. For Benjamin Braddock, that meant sex with your parents’ friend. For the novel’s unnamed narrator, that meant getting beat up and eventually blowing things up. The then–35-year-old director wasn’t necessarily interested in taking down credit-card companies, but the novel’s articulation of a certain emptiness in contemporary consumerist culture struck a chord with him. (In a New York Times piece about the movie on its 10th anniversary, Fincher admitted that as he was poring through the book, he kept thinking “Who is this Chuck Palahniuk and how has he been intercepting all my inner monologues?”)

It also hit a nerve with first-time screenwriter Jim Uhls, who’d help translate the author’s vision of bareknuckle nonconformist bliss into something filmable; with Andrew Kevin Walker, who had worked with Fincher on Seven and did a few uncredited script revisions; with Edward Norton, the actor du jour from Primal Fear, The People vs. Larry Flynt and American History X who was cast as the movie’s everydude hero; and with Brad Pitt, who’d turn the role of alpha-male anarchist Tyler Durden into an iconic interpretation of an Id Gone Wild. All men between the ages of 28 and 40, they felt they’d found something that was uniquely theirs — as well one of those once-in-a-generation takes that taps into something burbling underneath the culture, something a little ugly but undeniably resonant.

More importantly, they all recognized that it was a satire, the kind of piss take on masculinity crises that would literally give one male character “bitch tits” and push things into extreme Swiftian territory. “You’re going to do this as a comedy, right?” Norton would be quoted as saying. “Oh yeah,” Fincher replied. “That’s the whole point.”

There would be those that get the joke that is Fight Club, of course, and those that did not. Some folks immediately keyed in to its Infinite Jest-style snark (see: the universe rebranded as “the IBM Stellarsphere, Microsoft Galaxy, Planet Starbucks”) and a seriously abyss-black sense of humor, from Helena Bonham Carter’s goth-goddess of death to Project Mayhem’s new and “improved” airplane-safety cards. Women, Fincher would later note, often tended to pick up on the laugh lines a little quicker than guys, who may have not heard the punch lines over the sound of literal punches. Or, for that matter, the noise that a blade makes when it hits bone. 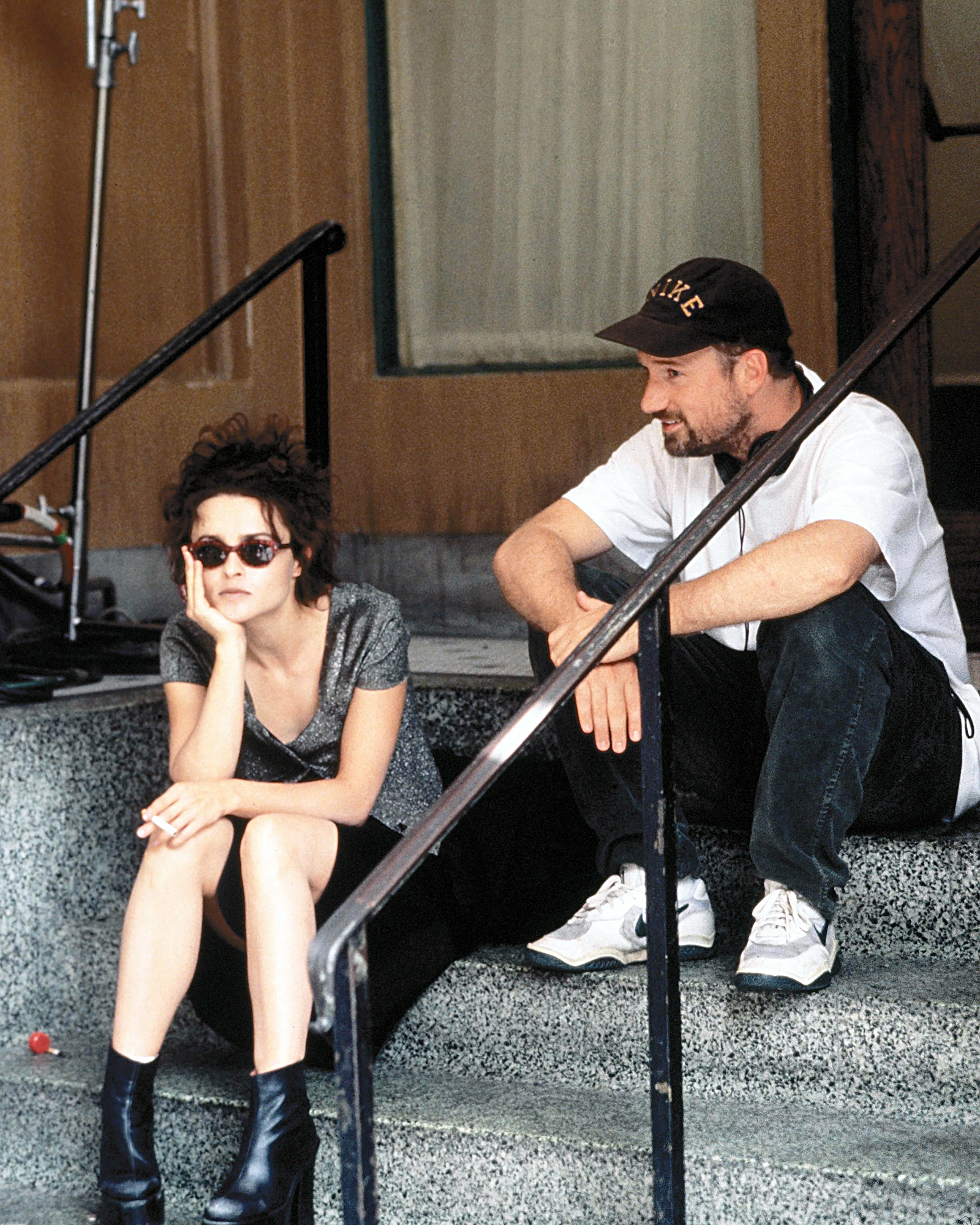 Helena Bonham Carter and director David Fincher on the set of ‘Fight Club.’

Which may be why there were others, the really enraged-and-confused types, who found a sort of gospel in Durden’s philosophies and bumper-sticker misogyny, who actually did believe that “that self-improvement is masturbation…maybe self-destruction is the answer.” Real-life fight clubs started popping up across the country after the film opened. Other converts began talking to like-minded dissatisfied dudes on social media platforms and chat rooms, and figured that turning that destruction outward was the next step forward. They would find a place for their anger and a sense of purpose. What is Tyler’s revolutionary army of “space monkeys” but a crude blueprint for the burgeoning incelligentsia, one devolutionary step away from hate groups, domestic terrorists and proud boys?

This is why returning to Fight Club 20 years later, in a vastly different landscape, is such a dementedly dualistic experience. It’s impossible not to thrill to Fincher’s filmmaking, which delivers the most stylish nihilism imaginable and gleefully gets off on its taboo-tweaking and formal rule-breaking. (Name another movie that starts off with a literal adrenaline rush.) You can appreciate how he uses Ed Norton’s normcore vibe to great advantage while still letting him display his chops, and how the actor makes you believe no one could beat themselves up onscreen better. It’s still easy to dig the Norton/Brad Pitt double act, and the sheer pleasure of watching Pitt lean into Durden’s catastrophic what-me-worry charm. You still wish you could pull off those insane outfits half as well. That twist remains a perfect WTF moment, even on repeat viewings; of course no one that sinewy and sexy and so effortlessly charismatic could be anything but a figment of a former beta’s imagination. The second-hand high of watching someone destroy something beautiful with such go-for-broke panache hasn’t faded.

And to watch Fight Club now is to see its influence in shows like Mr. Robot and various other unreliable narrator stories, as well as some other questionable attempts to capitalize on male angst minus the wit. (Don’t just take our word for it; read this.) It’s a reminder of why Fincher is considered a master filmmaker, and why Pitt’s one-two punch of Once Upon a Time…in Hollywood and Ad Astra this year feels like a continuation of a track that this movie helped him fully embraced. Every time Norton has mentioned the film in his recent Motherless Brooklyn press, you remember what a career highlight it is for him as well. It’s still brilliant.

But it’s also tough to think circa 2019 that watching buildings collapse is really a blast and a half, Pixies song or not; that the generation that came after did, in fact, get not one “great war” but two to define them, and the anxiety that a great depression has felt like it’s always just around the corner since 2008; that the way repressed males have turned the primal therapy of illicit violence into a toxic creed, and the way the internet and the powers that be — one person in particular — would metastasize the very thing this movie would be satirizing.

You can’t blame Fincher and friends for this; they were merely responding to the culture and happened to strike the motherlode. But his idea that everyone might share his ideas about it being a story of “maturity” feels like wishful thinking. Look at Fight Club, and you see a glorious bygone moment in American filmmaking, before the superheroes took over. You also see the present, however, and, God help us, the future. The statement that “we are all part of the same compost heap” has never felt more true that it does right now. What we would not give to make this strip of film jump the gate.