There’s a lot of romantic angst on Chicago Fire.

After Matthew Casey (Jesse Spencer) and Sylvie Brett (Kara Killmer) shared a steamy kiss after months and months of longing glances, stolen looks and pent-up feelings, the universe had a way of making any kind of romance unlikely — at least for the time being. Then there’s Kelly Severide (Taylor Kinney) and Stella Kidd (Miranda Rae Mayo), whose unbreakable bond as of late is looking a little worse for wear as cracks are beginning to form in their partnership as he opts to distance himself more while she continues on the road to her lieutenant exam.

As the cast members reveal, those unresolved tensions between the two Chicago Fire pairings aren’t going away anytime soon.

“If you can imagine it, there’s going to be even more angst unfolding over the next couple of episodes,” Killmer told ET’s Rachel Smith during NBC’s virtual OneChicago Day junket of Casey and Brett’s time apart. “We have some new characters coming in for both of them that are going to maybe create a little jealousy.” Both attempted to move on with new love interests pretty soon after Brett told Casey she needed some distance from him.

“We need a bit of space, is the track,” Spencer chimed in.

“Yeah, we’re trying to take space, but the feelings for each other are very strong,” Killmer noted. “So in terms of where it goes… it’s been two and a half seasons of them having heat, [a] long slow burn and so hopefully they’ll work it out and just get real candid. Have a real good conversation. Just let it out on the table.”

Though Casey and Brett tried to air out their frustrations following their heated makeout earlier this season, Spencer confessed he enjoys the roller coaster that is “Brettsey.”

“I like the drama. I like the up and down roller-coaster ride, it makes me feel alive,” he quipped, acknowledging fans’ frustrations over the duo’s inability to cement their long-gestating relationship. “I know they’re tearing out their hair. For us, because we were worried at the start that it was going to be real quick too. Now it’s been this long slow burn, which I’ve really loved. It was really organic, too, you know? Because last season, Sylvie was going through so much loss and they were there together for each other organically. It was really, really nice.”

“Now there’s a couple more road bumps… and then I promise you, we might get together,” Spencer hinted. “If I were a betting man, I would say by season’s end.” 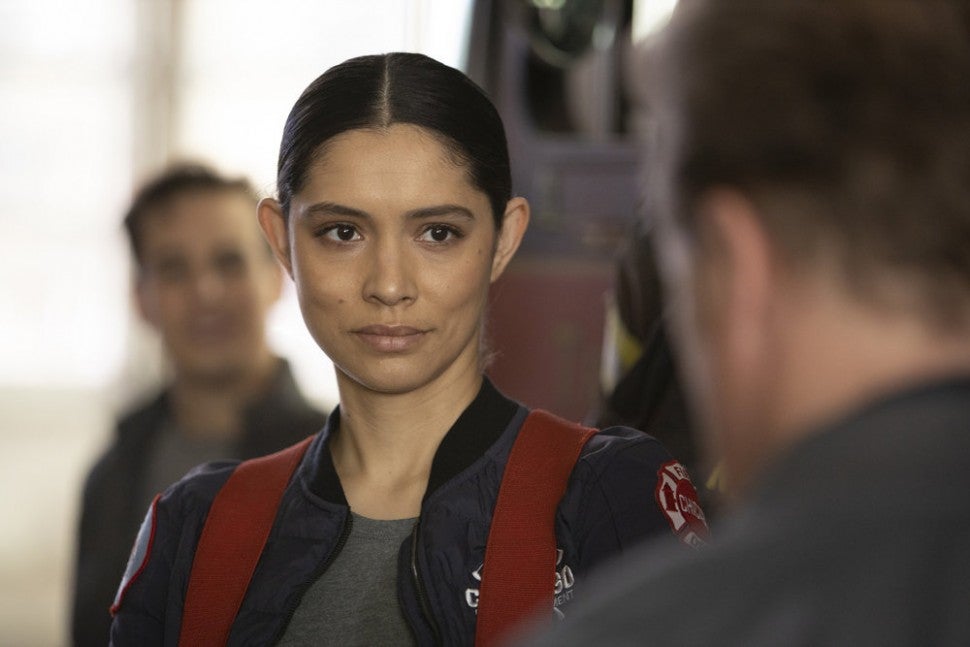 Over to Severide and Kidd’s relationship troubles, it all boils down to Severide not being fully truthful about his hesitancy to help Kidd as she works her way up the ladder.

“What we’re dealing with now is a lot of things [that] are preventable. It’s just the communication factor. He tends to retreat and go inside when things get tricky instead of verbalizing [them], and even if there’s the best intentions, I think what ends up happening is he puts his foot in his mouth with things.”

“It’s a guy trait sometimes,” he laughed. “I think you have a hard time where it’s like, ‘Hey honey, I meant the best. I just didn’t… I didn’t know how to say it or when to say it.’ So then the time passed and then you don’t. But Stella’s been, over the course of our relationship, she’s pretty good at bringing out the meaning and the good in what’s going on. If they were too similar in terms of the way they dealt with adversity, they would have gone the other way a long time ago.”

Mayo shared one thing she hopes Severide and Kidd are able to overcome through this rough patch in their relationship.

“I hope that Kelly starts communicating more, starts opening up — even if the communication is, ‘There’s something that I have to tell you and I don’t know how to tell you.’ Great, that’s a great place to start,” Mayo said. “I want for them to experience more collaboration. Sometimes there’s this stigma or this trope of a man when a man takes care of things, it’s like, ‘I can’t. I got to take it all on,’ and not show any emotional vulnerability or weakness. And even a man can’t do it ‘like a man,’ that gender performative BS that keeps us from actually relating with one another as individuals.”

Chicago Fire airs Wednesdays at 9 p.m. ET/PT on NBC. For more on the series, watch below.

To stay up to date on breaking TV news, sign up for ET’s daily newsletter.