For the scene which is taken on the Holywell Bay Beach in Cornwall, Emma’s Rhaenyra Targaryen looks a lot like Emilia Clarke’s Daenerys Targaryen as she has her long platinum blonde locks styled into an impressive braid.

AceShowbiz -Some first-look pictures of HBO “House of the Dragon” have found their way out online. In the pictures that were obtained by Daily Mail, stars Matt Smith and Emma D’Arcy were seen transforming into Prince Daemon Targaryen and Rhaenyra Targaryen respectively after filming a scene by the beach.

For the scene which was taken on the Holywell Bay Beach in Cornwall on Tuesday, April 27, Matt donned a black jacket and a pair of knee-high boots while sporting a long blonde wig. Joining him was Emma’s Rhaenyra. She looked a lot like Emilia Clarke‘s Daenerys Targaryen in a long crimson gown featuring split at the front and long platinum blonde wig. She had her hair styled into an impressive braid and fixed atop her head.

The pair were seen casually talking on the empty beach. At one point, they headed towards the water following the discussing. 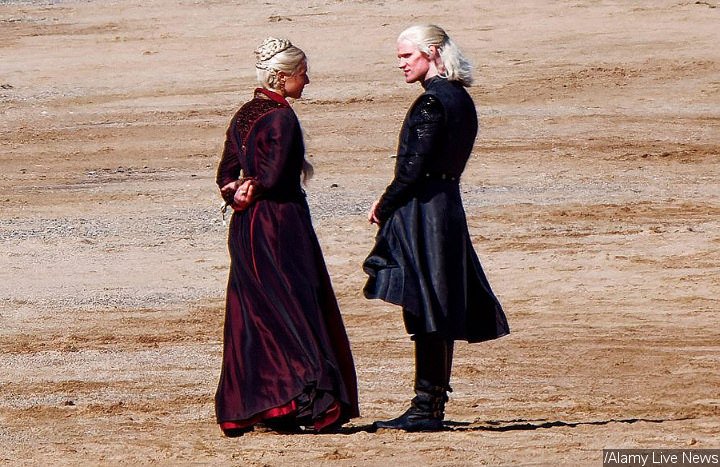 Matt Smith and Emma D’Arcy snapped in first-look pic of ‘House of the Dragon’.

The pictures arrived after it was speculated that the southern county would be the primary set for the prequel series of “Game of Thrones” as crews were spotted in different locations last week. It was also said that the production takes place in a medieval castle on St Michael’s Mount on Mount’s Bay in Cornwall that is said to be bearing a striking resemblance to the Croatia castle where Queen Cersei Lannister (Lena Headey) lives on the original HBO series. 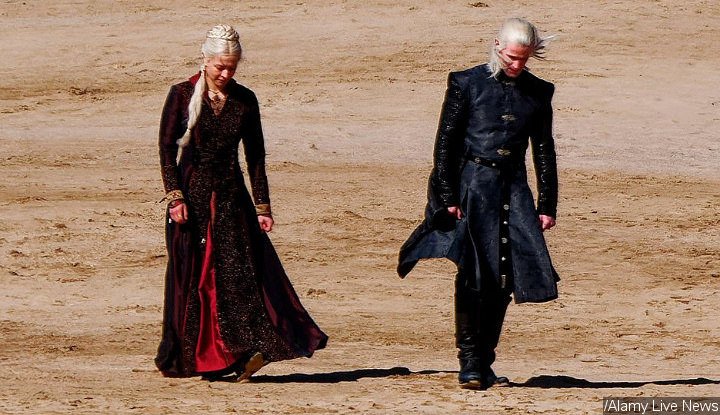 The new pictures arrive after HBO confirmed production on the “Game of Thrones” prequel on Monday, April 26 as it unveiled a few photos from the table reading. One of the pictures saw its stars practicing social distancing during the session. “Fire will reign. The @HBO original series #HouseoftheDragon is officially in production. Coming soon to @HBOMax in 2022,” the official account of the series wrote in the caption.

Based on George R.R. Martin’s “Fire & Blood”, “House of Dragon” is set 300 years before the events of “Game of Thrones” and will follow the House Targaryen. Paddy Considine leads the series as he plays King Viserys Targaryen. Olivia Cooke is cast as Alicent Hightower while Rhys Ifans plays Otto Hightower. Steve Toussaint joins the cast as The Sea Snake and Fabien Frankel portrays Ser Criston Cole, who is a member of King Viserys I Targaryen’s Kingsguard.