Winter is here for one Sydney pub's weekly Game of Thrones screenings, after Foxtel moved to shut down the event with a stern warning that commercial venues were not allowed to broadcast the hit show.

The Balmain Hotel in the city's inner west hosted its sell-out Balmain of Thrones nights for patrons who wanted to watch the latest episodes of the blockbuster fanstasy series with like-minded fans. 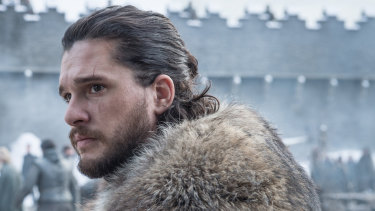 The pub did not charge an admission fee for the events, which featured goblets of wine and candlelit tables and were booked out ahead of time for the full series.

"We had 160 people in there last week," Ms Simpson said. "You couldn't move, we ran out of chairs.

"All the lights go off, there's not a sound, we even WD40'd the doors so they don't make a noise, we switch the food buzzers to only buzz once. Everyone stays and chats about the episode afterwards."

In its email to the pub, Foxtel said it was aware the venue had been screening the show for public viewing and requested staff to "kindly discontinue to do so".

The email said that the series had premiered exclusively on Foxtel's FOX Showcase channel, and commercial subscribers were not licensed to screen the show at their venues.

"No venues, whether Foxtel Business subscribers or otherwise, should be advertising that patrons can watch Game of Thrones at their venue," the email said.

"FOX Showcase is available to Foxtel residential and personal use subscribers only, and a residential Foxtel subscription cannot be used for exhibition of any Foxtel channel in a commercial or public venue.

"Any examples of Game of Thrones being aired via a residential or personal use account will be escalated to the Foxtel fraud team for investigation and action."

A Foxtel spokesman said that the company did not own any rights to license the FOX Showcase channel for public or exhibition broadcast.

The spokesman would not be drawn on whether it had issued similar warnings to other Sydney premises, however, the Balmain pub has not been the only venue to advertise such viewings.

Ms Simpson said the screening would not go ahead as scheduled for the rest of the final season.

Game of Thrones has become an entertainment juggernaut since it first aired eight years ago and HBO, the cable network behind the series, has previously pursued piracy and unauthorised screenings, from illegal downloads to live-streaming apps such as Periscope.

A bar in Williamsburg, New York, was told to stop its free weekly screenings of the program for patrons before the second episode of the fourth season went to air in the United States in 2015.

University of Sydney intellectual property expert Kimberlee Weatherall could not comment on any specifics of Foxtel's agreement but said licences could be subject to any conditions agreed by the parties.

"If the copyright owners have decided the best way to exploit their investment is to only make it available for pay TV in Australia for now, thats kind of their prerogative."