For many, there was a feeling of distance that came over us as we watched “The Bells,” the penultimate episode of “Game of Thrones” — the same distance, it could be said, that the camera kept away from the woman whose importance to this show cannot be understated, but whose journey has become painfully underdeveloped at the exact moment when it would be crucial for us to understand what’s happening inside Daenerys Targaryen’s head.

In the episode, at about the midway point — before Daenerys goes full-tilt fire crazy — there’s a shot of her sitting astride Drogon. The camera only catches her face in profile, before rotating around to focus on the back of her head.

Aside from an earlier close-up right after the ringing of the bells, that’s the extent to which her inner journey is put on screen for the second half of the episode, even as she reduces to ash the city that she previously claimed she did not want to reduce to ash, with innocents burned to a crisp before our very eyes. (The anonymous mother and child that Arya tries to rescue got more face time during the episode than Daenerys did.)

“The Bells” loves the back of Daenerys’ head (and in fairness, the show’s wig game remains on point) but that’s not enough to justify her actions, especially given that, as showrunners D.B. Weiss and David Benioff “explained” during the post-show Inside the Episode featurette, her decision to burn the joint down was basically a spontaneous one. 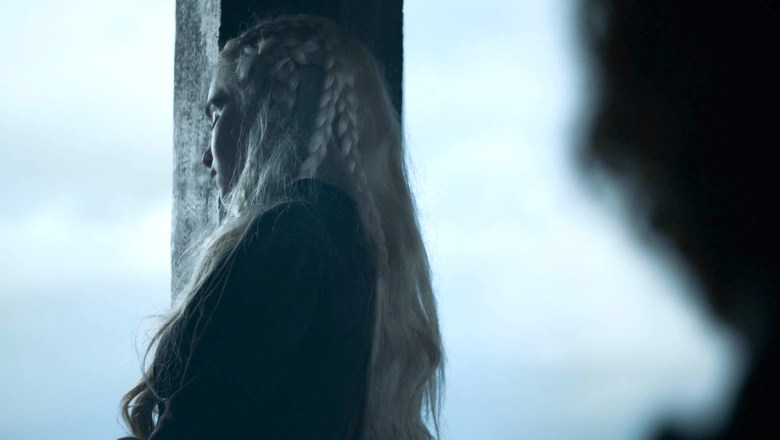 “I don’t think she decided ahead of time that she was going to do what she did. And then she sees the Red Keep, which is, to her, the home that her family built when they first came over to this country 300 years ago,” Weiss said. “It’s in that moment, on the walls of King’s Landing, when she’s looking at that symbol of everything that was taken from her, when she makes the decision to make this personal.”

That said, Daenerys did make good on another promise from that episode, as she told Varys at that point that “If you ever betray me, I’ll burn you alive.” To which he replied, “I would expect nothing less from the Mother of Dragons” — so really, can’t say he wasn’t warned.

That sequence did make sense for the character, because she not only used her words, but we saw her face as she gave the order to kill. It was a harsh choice, but one that fit with Daenerys’ past actions as she took action against a threat.

Daenerys has killed plenty, but typically with cause — slavers and traitors. The common people of King’s Landing, meanwhile, cannot be categorized as such. And maybe that’s why the camera stayed off her face in the long run; maybe there was no possible look that would explain her choices. But even the attempt to bring a human element to the scene would have gone a long way towards helping the audience understand that there was still some humanity left in this show.