Game of Thrones season eight, episode five first look pictures have been released by HBO and Sky ahead of GOT 72’s release later this week. Featuring the likes of Jon Snow (played by Kit Harington), Daenerys Targaryen (Emilia Clarke) and Tyrion Lannister (Peter Dinklage), the first pictures from Game of Thrones 72 tease what drama is on its way. Along with the episode five promo, the next episode of Game of Thrones promises to be one of the most action-packed to date.

WARNING: This article contains spoilers from Game of Thrones season 8.

Daenerys can be seen in one of the images looking mournful following the emotional rollercoaster that was episode four, The Last of the Starks.

Missandei (Nathalie Emmanuel) was executed under the orders of Cersei Lannister (Lena Headey).

HBO viewers were also left stunned to see Dany’s dragon Rhaegal shot down and killed by Euron Greyjoy (Pilou Asbaek) and his fleet.

Back in Dragonstone for episode five, Daenerys looks emotionally drained as she stares out across the bay in one of the first look pictures. 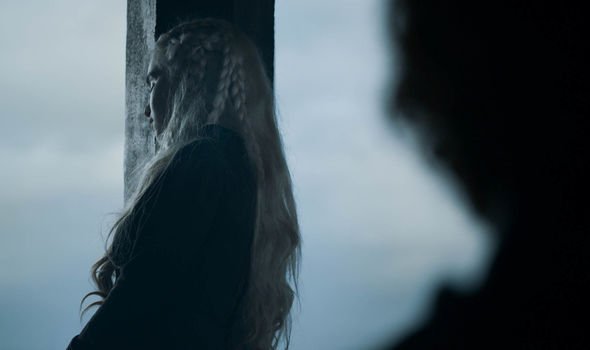 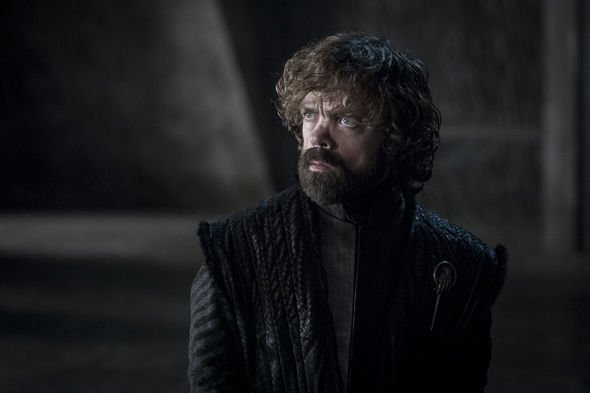 Tyrion’s head can also be seen in the shot, although whether he’s there to comfort her or betray her following his conversation with Lord Varys (Conleth Hill) is unknown.

The Lannister man is pictured by himself in one of the first look pictures as well.

A look of apprehension is clearly etched on Tyrion’s face as he’s pictured in The Throne Room.

GOT fans will know from the trailer he’s in there for a discussion with Daenerys.

The topic of their conversation won’t be revealed until the episode is broadcast, however. 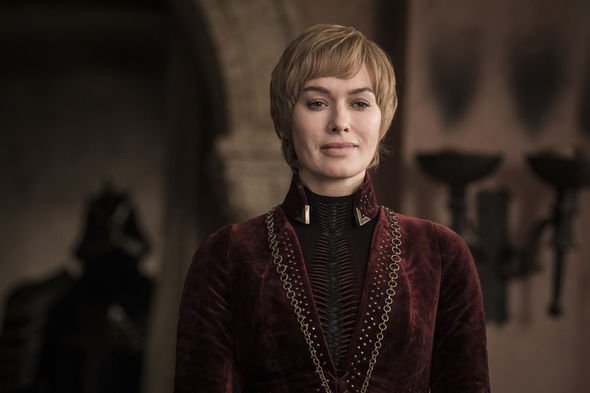 Away from Dragonstone and Cersei looks as smug as ever as she’s pictured in King’s Landing.

Fresh from the success of executing one of Daenerys’ most faithful advisors and the murder of one of her dragons, Cersei has reason to be pleased with herself.

As per usual, The Mountain (Hafþór Júlíus Björnsson) is shown within a close proximity to his queen.

Not many spoilers are given away from Cersei’s picture but it’s likely she’s standing staring over the Red Keep, similar to the position she took when she blew up the Sept of Baelor in season six.

Back to King’s Landing and it’s Greyworm’s (Jacob Anderson) turn to meet with Daenerys. 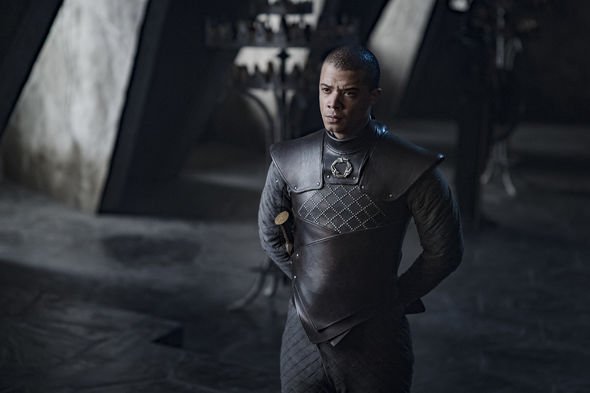 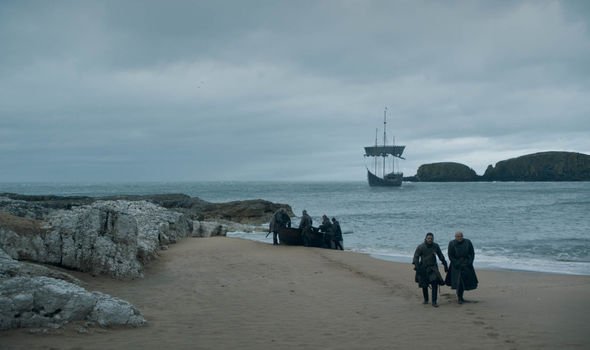 Greyworm is pictured in the Throne Room where Tyrion once stood.

The leader of the Unsullied looks understandably distraught after witnessing Missandei’s death in The Last of the Starks.

He looks ready for battle as he awaits orders from his queen.

Outside of Dragonstone, Jon Snow meets with Lord Varys after sailing down south.

Varys and Jon Snow are shown walking over the beach while soldiers dock the boat they’ve sailed on.

Later, Jon joins Ser Davos (Liam Cunningham) outside the gates of the Red Keep in one of the pictures.

WHO TOLD TYRION THE TRUTH ABOUT JON SNOW ON GAME OF THRONES? 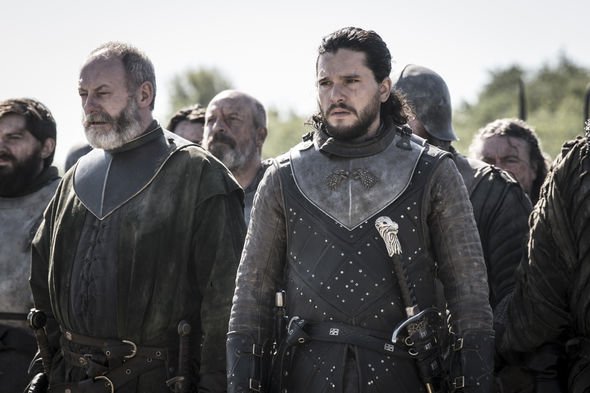 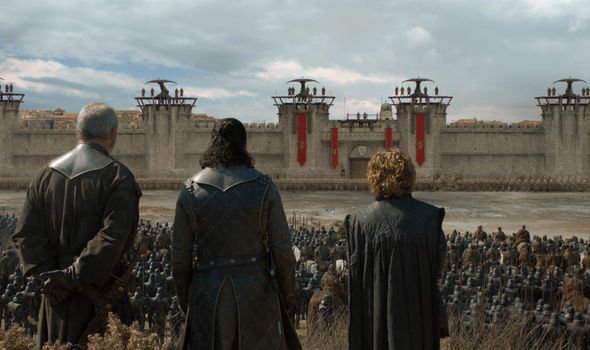 With a battle imminent, GOT fans will finally get to see The Golden Company in action.

Tyrion, Jon and Davos can be seen with an army of Dothraki and Unsullied ahead of them as they wait outside the gates of the Red Keep.

However, they appear to be outnumbered as the force of The Golden Company can be seen in the distance.

The captain-general Harry Strickland (Marc Rissmann) is pictured in a separate image as he prepares his mercenaries.

HAVE GAME OF THRONES SEASON 8, EPISODES 5 AND 6 BEEN LEAKED? 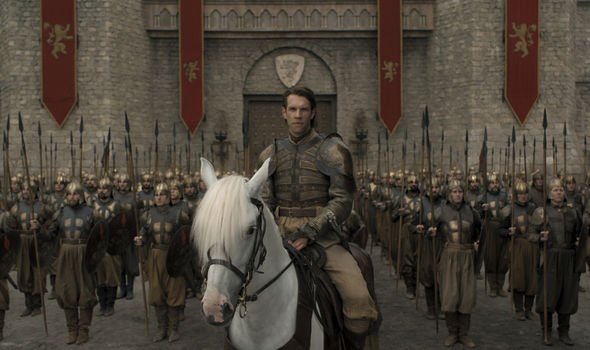 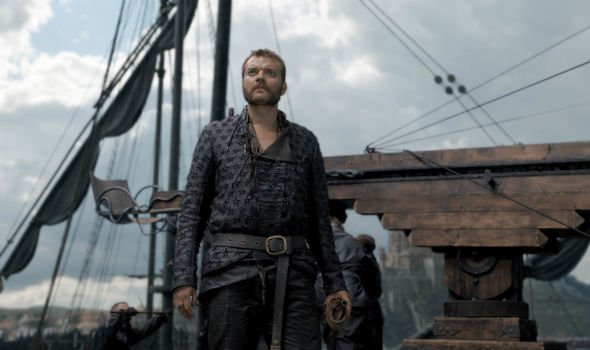 The final of the first look images shows Euron on board one of his ships.

Similar to what Game of Thrones fans saw in the preview trailer, Euron is shown looking worried as he stares into the sky.

The promo revealed the reason for Euron’s apprehension is a roar from Drogon.

However, Drogon isn’t shown in the promo or pictures so fans will have to wait for the episode to see him in action against Cersei’s forces.

Game of Thrones season 8 airs on HBO in the US on Sundays 9pm ET and on Sky Atlantic and NOW TV in the UK on Mondays at 2am & 9pm BST.