On the May 14 episode of Gogglebox, viewers were excited to see what the latest families would be watching. However, fans were distracted by Mary’s frequent jabs at her husband Giles throughout the evening, with many taking to Twitter to express their disappointment at the pair’s bickering.

However, it was the sight of couple Mary and Giles constantly arguing that got fans talking.

While watching Lego Masters USA, Mary took a jab at Giles who was swearing after watching the show and explaining to his wife about American expressions. 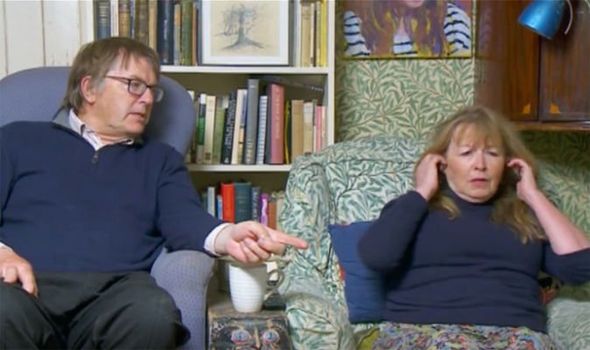 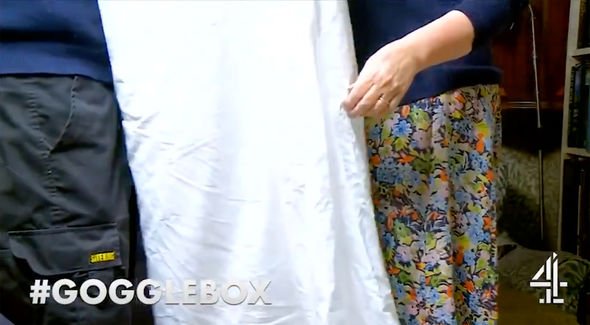 Mary couldn’t bear to hear the swearing and quickly covered her ears.

She then said: “You’re not allowed to swear in this room.”

Giles continued to try to explain the Anglo Saxon roots of the swear words before Mary cut him off by saying to him: “Right, I’m not speaking to you again now for 10 minutes.”

The two were seen folding their bedsheets earlier in the programme, and Giles took the opportunity to have some innocent fun with his wife.

He jokingly said as Mary was drowning in white sheets: “You look as white as a sheet Mary. Are you sure you’re feeling well?”

Mary was exasperated by her husband’s questioning, snapping back: “Oh, please, I’m not interested in toddler humour.”

“It’s not, it’s the English sense of humour,” Giles protested.

Giles again repeated: “Mary, you look white as a sheet, do you feel alright?”

Mary firmly replied: “Well, you won’t be feeling alright in a minute.

“Because I’ll be punishing you.”

Giles continued by pretending to be a ghost and making ghostly noises in her face.

Mary then remarked: “Oh, Giles, I can’t live with a toddler.

This interaction angered loyal viewers on social media, with one writing on Twitter: “She isn’t very nice to him, is she?”

Another Twitter user quickly responded saying: “No she’s absolutely vile, always putting him down and belittling him. makes me so sad.”

Another agreed, remarking: “I swear they hate each other hahaha!”

However, at the end of the show, after Mary fell asleep, Giles placed a blanket over her and let her rest.

This touching moment prompted one person to tweet: “Giles is so caring with the blanket bless him @C4Gogglebox #Gogglebox.”

A few other users commented as well, simply writing “Awww,” as they witnessed the sweet moment between the two.

Gogglebox airs on Channel 4 every Friday night at 9pm.