Harry Potter fans will no doubt remember some of the more iconic scenes from the series that evoke a wintery vibe. For instance, Harry Potter and the Philosopher’s Stone showcased Hogwarts adorned with gorgeous Christmas festivities, and saw Harry (played by Daniel Radcliffe) and Ron Weasley (Rupert Grint) using the Invisibility Cloak for the first time. Over the course of the eight Warner Bros films, viewers have seen almost all of the locations in the wizarding world festively dressed for one memorable events. One of the key parts of the universe that did not get decorated for Christmas, however, was Diagon Alley – until now.

This week the Warner Bros Studio Tour London has reopened its doors once again, following the UK lockdown that was imposed in November.

Upon reentry, fans of the franchise will be welcomed back into Diagon Alley in a never-before-seen state.

The historic high-street has been drenched in snow and festive decor for the first time ever, giving fans a glimpse into how the rest of the wizarding world looked around Christmas time during the films.

Shop windows and doorways of Ollivander’s Wand Shop and Weasley’s Wizard Wheezes have been decorated with a powdering of snow, giving first-time attendees a real Christmas feel, while veterans of the WB Studio Tour London will barely be able to recognise their favourite stores. 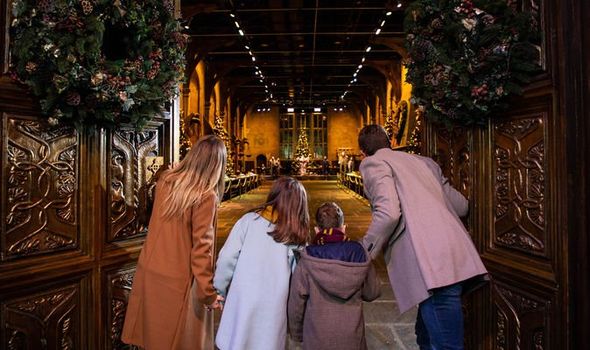 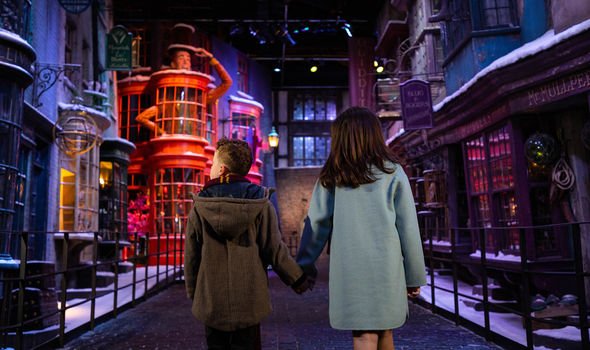 Fans may recall that, although Diagon Alley was never seen snowed under, Hogsmeade was – which incidentally used the same set’s parts during Harry Potter and the Prisoner of Azkaban. This scene saw Harry scouring the frozen land in his aforementioned enchanted cloak.

Diagon Alley isn’t the only part of the attraction that has been given a new look, as the enormous Hogwarts castle model has also seen a change.

According to Warner Brothers, a member of the crew was suspended over the monolithic castle during filming – perhaps using Wingardium Leviosa – to “sprinkle the mixture of granulated paper and grains of salt onto the model by hand with a sieve”.

Attendees will be able to view the castle in all its glory during the tour, complete with paper and grains of salt. 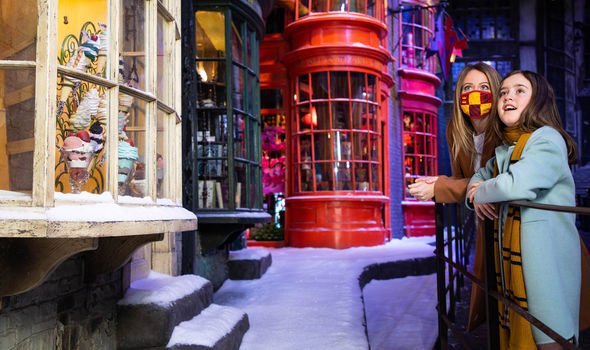 Finally, the legendary Great Hall of Hogwarts Castle has also been given a complete makeover.

Just like the final scenes of Philosopher’s Stone, the hall now includes a mouth-watering feast, garlands hanging from every nook and cranny, Christmas trees, and even Christmas crackers on the table.

The unbelievable Harry Potter experience is open now, and will remain looking festive until Sunday, January 17, 2021.

This summer, Fred and George Weasley actors James and Oliver Phelps worked with LEGO to bring the magical street to brick form for the first time.

The actors showcased the new LEGO set, which came complete with 14 mini figures – including the Weasley twins themselves – and was made out of 5,544 pieces of LEGO.

Speaking to Express.co.uk about the new set, the actors explained it even contained some secrets from the real-life Diagon Alley set.

James explained: “It rekindled memories in my mind of filming 20 years ago.”

James continued: “I remember filming Chamber of Secrets and everyone was filming inside [the book shop] Scribblers and next door while they were setting up – it was quite tight.

“So Oliver and I would go into the Quidditch Supply store, and we were literally just hanging around in there – but that was never seen in the movies.

“But this [LEGO set] was exactly like it was was where we would go and hang out!”