House of the Dragon: S1 EP8 Inside the Episode

The question of succession has become an increasingly prickly with Alicent Hightower (played by Olivia Cooke) eyeing up the Iron Throne and seeking to put her son Aegon Targaryen (Tom Glynn-Carney) there instead of Rhaenyra (Emma D’Arcy), even though she was named heir. With Viserys’ (Paddy Considine) ailing health continuing to grow worse, many House of the Dragon fans will be trying to see what happens next and Alicent’s fate in the middle of so much tension. Express.co.uk takes a look at House of the Dragon’s source material Fire & Blood by George R.R. Martin which the show is adapted from.

WARNING: This article contains major spoilers from House of the Dragon and Fire & Blood by George R.R. Martin

What happens to Alicent after Viserys dies?

In the book, Alicent conspired to put her son Aegon on the throne and Rhaenyra was only latterly told of Viserys’ death.

With the rest of the Small Council, she decided to ignore Rhaenyra’s claim and have Aegon installed.

This then led to the Dance of the Dragons – a Targaryen civil war between Alicent’s supporters (known as the Greens) and Rhaenyra’s allies (the Blacks) with many twists and turns in the conflict.

However, Rhaenyra did manage to gain the upper hand and ruled on the Iron Throne for half a year. 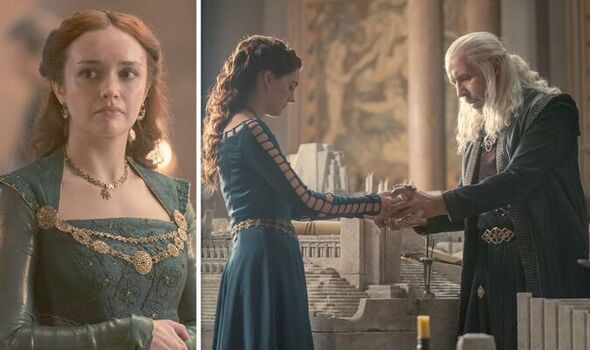 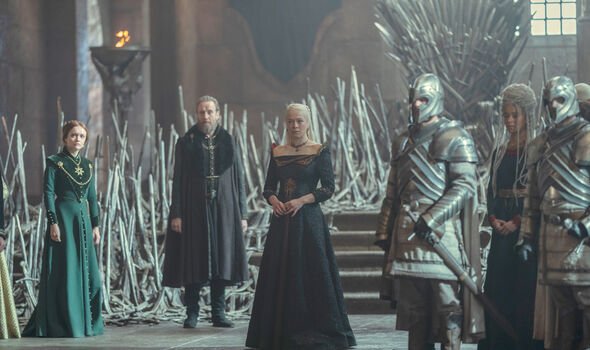 During this time, Aegon II was injured while Ser Otto Hightower (Rhys Ifans) was beheaded and Alicent was imprisoned.

Aegon and his family were spirited out of King’s Landing, according to A World of Ice and Fire. Rhaenyra was eventually forced from the throne and Aegon took control.

Later in the Dance of the Dragons after Aegon II died, Rhaenyra’s son Aegon III was put on the Iron Throne after much bloodshed.

Alicent’s grand-daughter Jaehaera was married to Aegon III and so joining the Blacks and the Greens.

But Alicent opposed the union and so she didn’t attend the ceremony and in Fire & Blood she is said to have told Jaehaera to kill her new husband Aegon.

Given Alicent refused to be reconciled and accept the outcome of the Dance of the Dragons with Aegon now on the Iron Throne, she was again thrown into prison.

She stayed in Maegor’s Holdfast, a square fortress in the middle the Red Keep in King’s Landing.

This was where Alicent lived out the rest of her days and only had the company of a septa and serving girls. 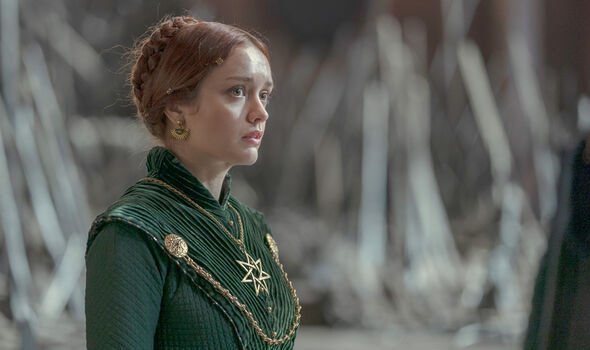 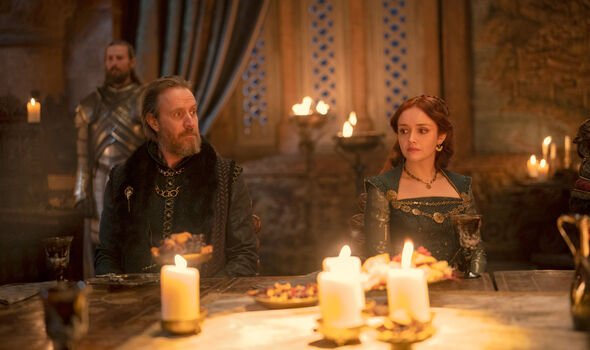 She began talking to herself and apparently started to ironically dislike green – the banner colour of House Hightower when it went to war. Green was a shade so visible during the Dance of the Dragons.

Alicent eventually died during the Winter Fever outbreak in 133 After Conquest (A.C.) after such a eventful life. In the end, it wash Rhaenyra’s son on the throne and the Greens ultimately losing the civil war.

House of the Dragon has been diverging lots from the source material and it’s highly likely this will happen yet again with Alicent’s arc.

There has been much more nuance in the show in Alicent’s actions and motives compared to the source material, which paints her as more of a duplicitous climber and a power-hungry queen.

In the final scene of episode eight of House of the Dragon, a dying Viserys drank Milk of the Poppy to ease his pain and spoke of Aegon’s Dream of Ice and Fire.

He thought he was speaking to his daughter Rhaenyra, who knew about the Targaryen secret, but he was actually talking to his wife Alicent.

Viserys was murmuring about “Aegon” and “the Prince who was Promised” with Alicent interpreting this as her husband changing his mind about his heir to her son.

Speaking on the most recent instalment of Inside the Episode, House of the Dragon writer Ryan Condal said: “This is a guy who was unwilling to make enemies of one side to do what was right, so a lot of things in his life went unsaid because he was trying to always tamp down aggressions. And it it leads to the final moment where his final message is unclear.

“He’s very ill, he was in a lot of pain, they put him on medication. And he wakes in the middle of the night, trying to have this unfinished conversation that he had with Rhaenyra, not realising that the woman sitting at his side is not Rhaenyra, but Alicent.”

He went on to say: “So if speaks to her as if she’s Rhaenyra and Alicent picks out words like ‘Aegon’ and ‘Prince who was Promised’ and ‘prophecy’ and whatever, and doesn’t understand all the context going back into it because she’s never heard the Song of Ice and Fire, because she was never his heir.”

Condal added: “So it is a bit of a tragic end but it goes to the idea that this prophecy is a bit of gossamer sliding through your fingers and it’s hard to grasp all at once.

“And also, his lack of dealing with issues at hand at his court, that he was responsible for during his life.”