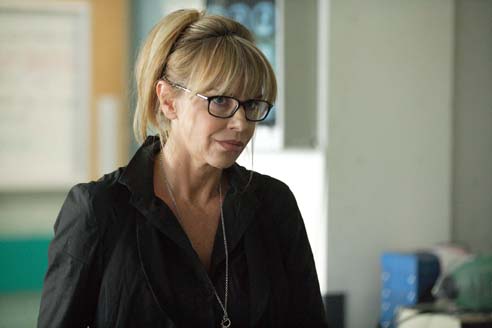 Holby City’s Leslie Ash will return to the life of medical dramas soon as she reprises her role as Vanessa Lytton – this time in Casualty.

Vanessa was described as ‘scheming and conniving’ character and back when she first took on the role, Leslie said her character hasn’t ‘had to work her way to the top and people resent her for it.’

Vanessa made her arrival to Holby City Hospital back in 2009 but as Leslie recently told OK! Magazine, her character’s return to the hospital is a little different this time:

‘I played a wonderful character called Vanessa Lytton, who was the CEO of Holby City. She brought quite a bit of trouble to the hospital and ended up having to leave.

I thought I’d seen the back of her until I was recently asked to come back for an episode.’

She continued: ‘She’s returning as a patient. It’s a great little storyline and it’s given me the chance to be back on set again.’

Discussing what it was like to return to the medical drama again, Leslie added: ‘It was lovely to see Derek [Thompson] again. My first TV job ever was The Gentle Touch and that was the last time we saw each other.

It was over 40 years ago! In an ordinary world we’d be hugging one another, so it was strange not to have any of that.’