HOLLY Willoughby's fans are outraged that she’s been used to promote dangerous diet pills in a Facebook weight loss scam.

Fraudsters have targeted the 38-year-old online, claiming she is taking Purefit Keto to help her slim down – despite her having nothing to do with the fat-burning pills. 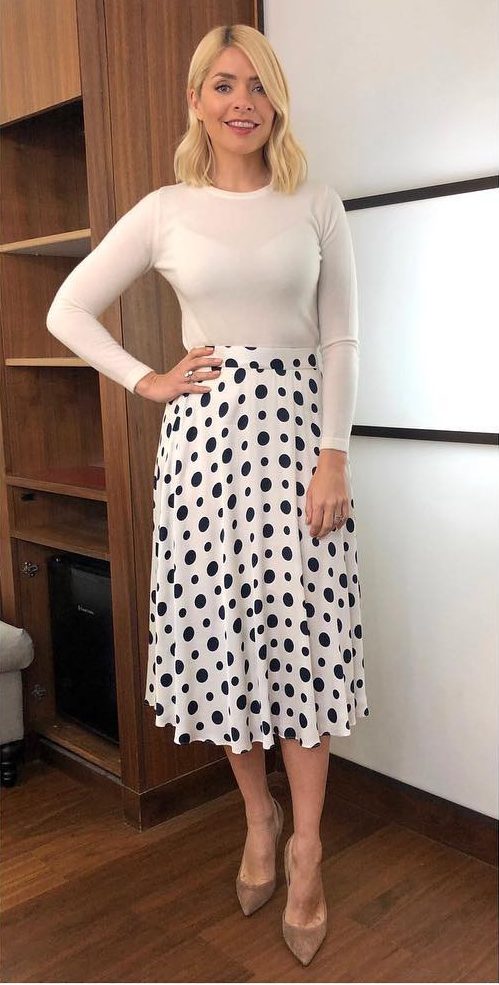 They said Holly feared her weight was "getting a little out of hand" and had turned to the "secret method" praised by celebrities.

The advert suggested Holly had given an exclusive interview with ITV News about how the so-called skinny pill burns fat quickly.

But in reality, the This Morning host had no idea she was being used in this way.

The Facebook post had a link to a website called Exercise Tips. In a bid to convince readers it was genuine, the article claimed Holly's family were worried about "losing weight too fast after taking a controversial new skinny pill." 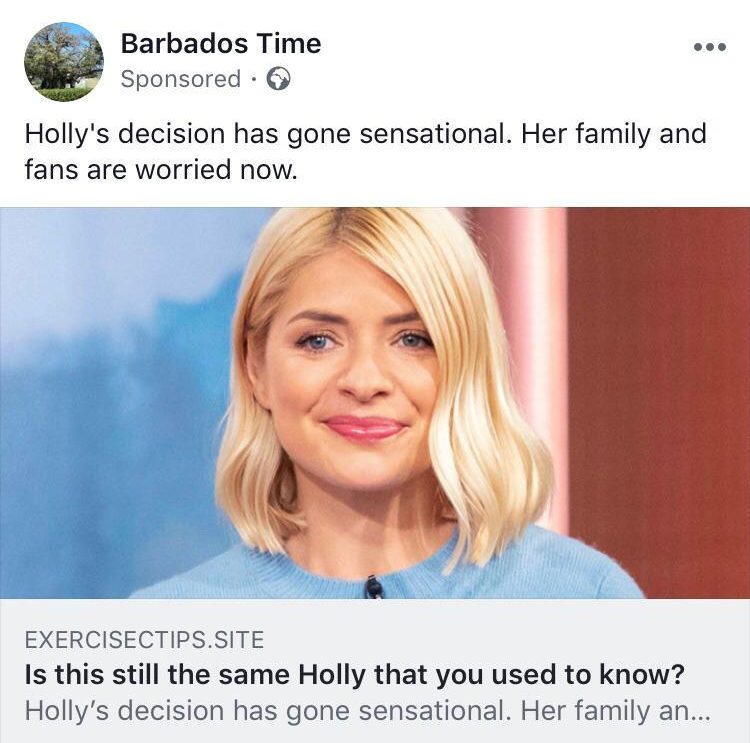 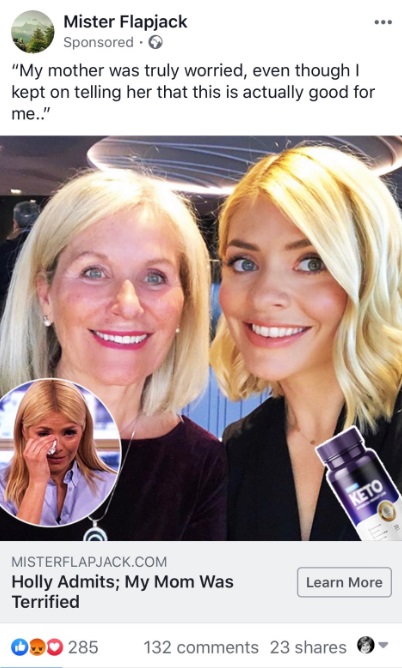 It was captioned: "Holly's decision has gone sensational. Her family and fans are worried now."

Some fans were able to see through the fake ad straight away – while others praised her new body.

One said: "How is this company getting away with advertising like this when it's all a con? Come on Facebook, do something."

Another added: "I actually think Holly may be the most beautiful girl inside and out, ever.

Someone else moaned: "Too many of these 'Keto Pills' adverts. All a load of s****.All anyone needs is commitment to a healthy lifestyle, which includes a healthy diet and exercise.

"It's not hard. You just have to really want it instead of trying to cur corners."

Another fumed: "Disgusting. That is alll."And agree that FB should be removing c**p like this." 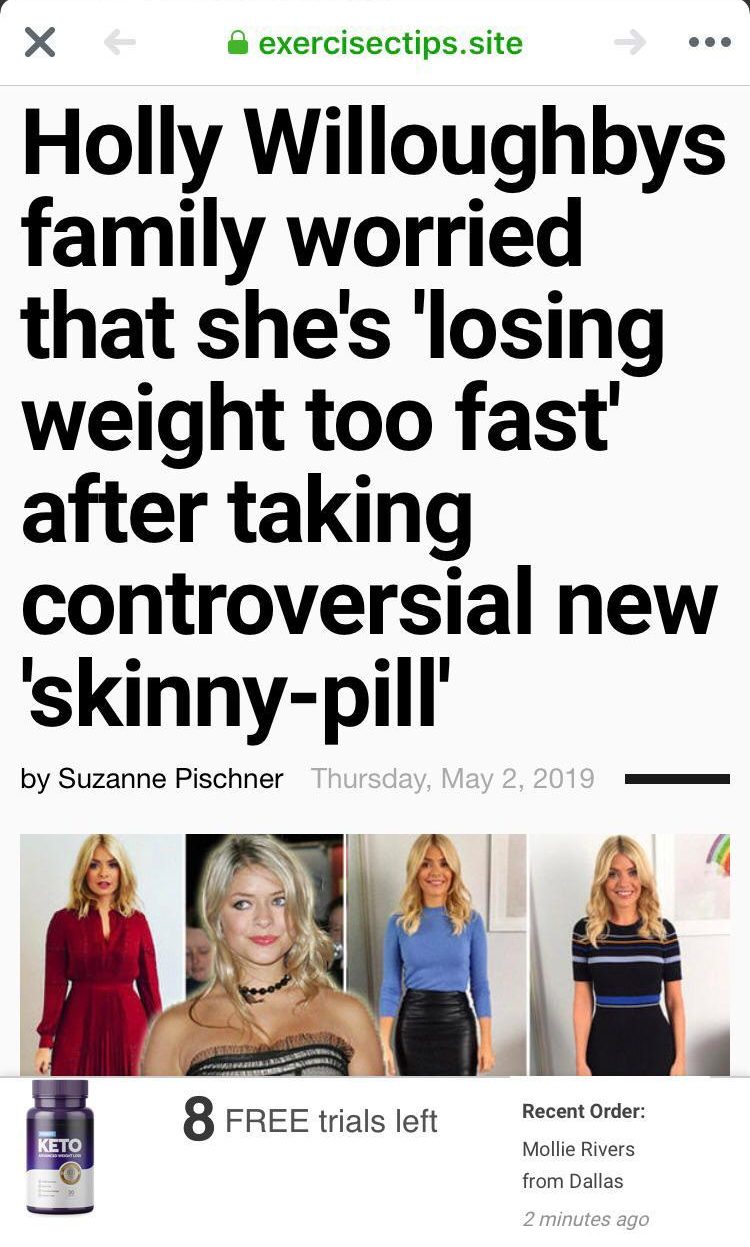 In the article, the scammers used fake quotes claiming Holly said: "When your life revolves around being on camera and on TV you always have to look good for the fans, the media, and for yourself.

"I knew dropping my weight was going to be tough, but I knew there had to be an easy solution.

"I did some research and stumbled upon Dr Christian talk about Purefit Keto on his show Embarrassing Bodies.

"I decided it couldn't hurt to try and what happened to me was unbelievable.

"I don't know what was more rewarding, my amazing weight transformation or seeing the look on my agents face last time we booked a live performance. His jaw literally dropped." 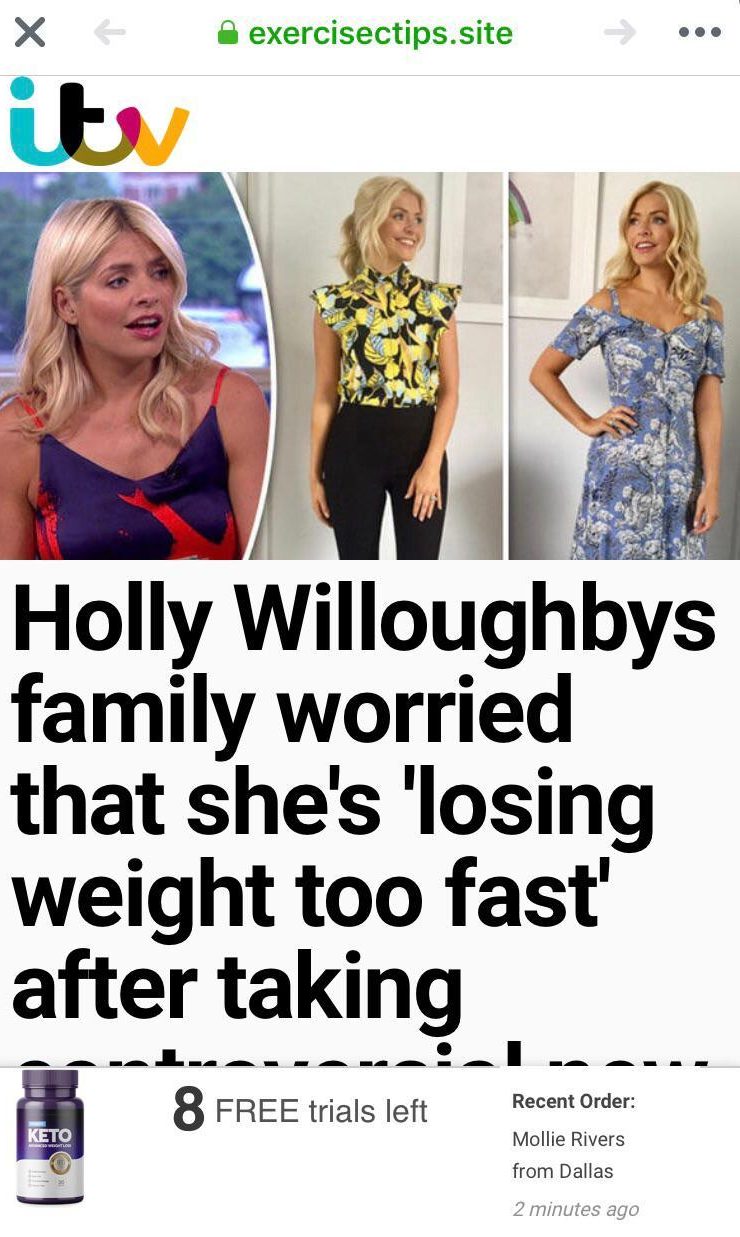 The advert also name dropped singer Adele, claiming she lost 33 lbs in a month with the pill.

Advertisers added that the product "flushes out the junk in your body and increases your metabolism, without harming your immune system."

Another post seen by The Sun Online uses the quote: "My mother was truly worried, even though I kept telling her that this is actually good for me."

Next to the image of Holly with her mum, Linda, was a picture of Purefit Keto.

Sadly, Holly has also been the victim of similar fake adverts in the past.

In March 2018, a website named Cutting Edge Salon claimed Holly had lost two and a half stone by using its weight loss supplements, Bio Slim Cleanse.

In another ad, someone claiming to be Holly boasted that she keeps in shape by using a drug called Lipovyn.

Holly is notoriously private when it comes to talking about her weight.

She has got drastically thinner since giving birth to her third child Chester in 2014, but has always kept tight-lipped about how she reached her goal weight. 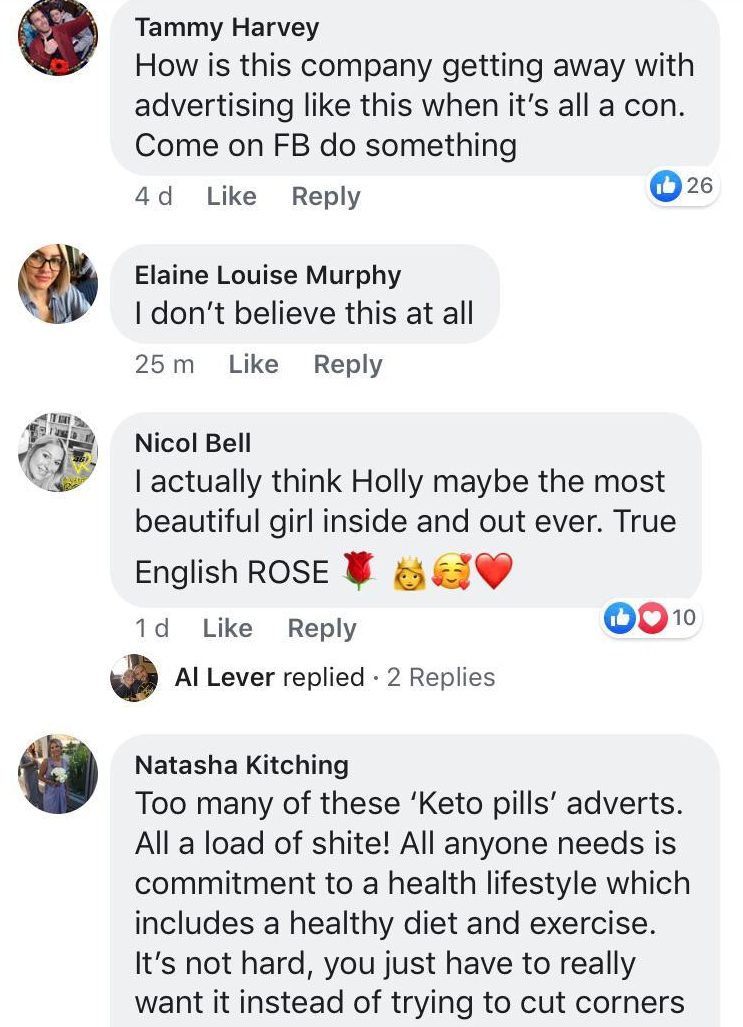 "It's a personal thing for me, and I think people get obsessive with it," Holly told The Sunday Times magazine recently.

She added: "Everybody knows what leads to a healthy lifestyle, but it's not up to me to give you a blow-by-blow account of what I've eaten that day. It's not helpful, and it's not what's important."

The Sun Online has approached Holly's reps for comment.