Amy Poehler isn’t exactly playing herself in “Wine Country,” but the first-time filmmaker and bonafide comedy superstar has plenty in common with Abby, her type-A character who considers planning a trip for her five best friends to be a fun and relaxing diversion. That’s not by accident, because Poehler’s feature filmmaking debut — she previously directed episodes of “Broad City” and “Parks and Recreation” — was inspired by a real-life trip that the perpetually prepared Poehler helped craft for a bunch of her actual best friends, including fellow “Saturday Night Live” vets (and eventual “Wine Country” stars) Maya Rudolph, Rachel Dratch, Ana Gasteyer, Paula Pell, and Emily Spivey.

“I had been excitedly thinking and talking and looking to direct a feature, and then like most good things, it happened a little organically,” Poehler said. “We were on our own trip, and I turned to Emily Spivey, who ended up writing the script with Liz Cackowski, and I said, ‘This could be a movie.’ And I just forced deadlines on people until it became one.” (A very Abby move.)

Based on an “amalgamation” of trips the co-stars (both Spivey and Cackowski also appear in the film) have taken together before (including Dratch’s actual fiftieth birthday excursion), “Wine Country” follows six best friends who head to the Napa Valley for what should be a relaxing weekend away, until personal problems, old resentments, and a lot of wine force them to confront some tough stuff. The main draw for everyone: more time together, which also meant more time laughing.

“It’s so hard to get everybody together in the first place, but [we thought], wouldn’t it be great if we could actually make a movie out of it?,” Rudolph remembered. “Thank God Amy’s such a team leader. She was like, ‘Alright, let’s actually not keep saying we’re going to do it. Let’s make it happen. You guys are writing it. We have all of it. We have the access to all of the ways to create it, now let’s just get it done.’”

Another benefit: Poehler felt secure that, at the very least, the film would be funny. After all, she had a built-in, can’t-miss cast that she’s worked with for most of her career. The film’s stars and writers are stacked with some of the biggest talents to come out of “SNL” over the past two decades, from big names like Poehler and Tina Fey (who appears as a very amusing Airbnb host) and Rudolph to comedy stalwarts like Pell and Spivey.

Co-star Pell, a former “SNL” head writer who previously wrote the Poehler and Fey vehicle “Sisters,” echoed a similar sentiment. “When I write something now and I talk about casting, I always want them, I always want them first, because they really truly are all the best,” she said. “They came to ‘SNL’ at different eras, but somehow we forged this friendship. I saw them grow and saw them blossom, but when they got there, they were already so funny.”

In “Wine Country,” the central six-some are bonded by another shared job: they all worked in a Chicago pizzeria when they were just starting out. Sure, it’s not as glamorous a gig as working on “Saturday Night Live,” but the film posits that the friends you make when you’re that young, no matter where those relationships take root, are the ones that will help guide you through the rest of your life. At least, that’s been the case for the ladies of “Wine Country.”

“There’s so much more brought to our experiences,” Rudolph said. “I think people know themselves better, I think they know what they want, what they don’t want, how they like to work. It just created such a great healthy work environment, when you’re with people who are genuinely good friends where you’re like, ‘I’m not feeling blah, blah, blah.’ They’re like, ‘Great, I get it. Those are your needs. We’re going to do A, B, and C.’ It’s a huge luxury.”

Through her Paper Kite Productions (which she runs alongside fellow execs Kim Lessing and Kate Arend), Poehler has spent the last decade actively developing and championing female-fronted work. “Wine Country,” a film that’s unabashedly about a group of women who really love and support each other, was an obvious fit.

“I’m always kind of hungry to see women in film, especially that I relate to and that I can identify with, and when I do, it’s so satisfying,” Poehler said. “It’s like drinking the tallest glass of water. There’s so much great content, art, film, television being made by women and men that show the female experience, but not enough, I think.” 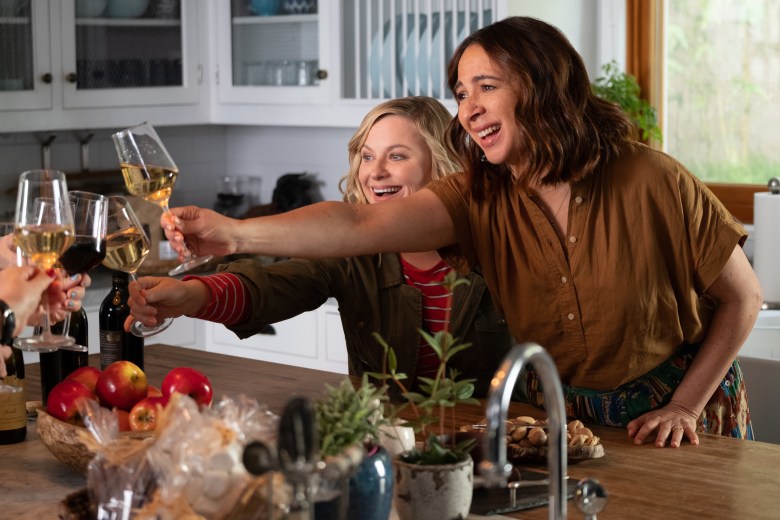 Poehler particularly wanted to dig into a period of life — the “juicy middle part” — that doesn’t get enough play in popular culture these days. “Your kids are young, your parents are aging, you kind of have figured out what you ‘want to do,’ and so then you just kind of have the hard work of being a person and being in a relationship,” she said. “We’re kind of obsessed as a culture and a country with the beginnings of things, and we bombard young people with all these questions and then we just assume that people stop growing, and they don’t. They do not, and as you get a little older you realize that. You’re like, ‘Oh, this never ends.’ If you’re lucky. If you’re lucky, it never ends.”

Pell is a bit more brassy about where “Wine Country” fits in to a widening landscape. “These days, finally, you can have a chance at getting things made that aren’t like, ‘oh, well, will fourteen-year-old boys like this?,’” Pell said. “It’s just like, yeah, there’s stories to be told on a lot of different corners of humanity, and this is one of them.”

“Wine Country” also offered Poehler the chance to specifically champion some of her favorite talents, like Pell and Spivey, best known for their comedy writing and who both get their own memorable turns in front of the camera. “Paula Pell and Emily Spivey are two people in the film that everybody in comedy knows, but not as many people have seen their work,” Poehler said. “I loved that their faces pop up on screen, and they might not be familiar to people, but they basically steal the movie. I don’t take any credit for it, but it was kind of my secret idea, right? ‘Let’s make this movie with all of us, but let’s have Emily and Paula steal it.’”

That kind of spread-the-wealth mentality has long been baked into the process for all of the “Wine Country” stars. Rudolph attributes that attitude to the sketch comedy world of “SNL” that fostered all of them. “It’s part of the process to make sure that everyone in the room is their best and their funniest,” Rudolph said. “Standups are solo acts, and so they’re meant to be the funniest one and make sure their stuff is great and make the funniest joke. Sketch is really different, sketch is coming from a place where if you’re the biggest, shiniest thing in the sketch and everybody else isn’t, it’s just not as funny. You want to make sure everybody shines.”

But every production needs a leader to make sure that shining happens. While “Wine Country” is Poehler’s first feature, moving behind the camera seems to have been a natural fit for her. “Amy was such an incredible director, and made us all feel so truly directed in a free way,” Pell said. “She always had a plan, she was prepared. I’ve worked with a lot of people, and you get on the set and they’re not prepared and you go, ‘oh, my God.’ … She knew how to bring out the best in all of us, which I feel like is a director’s job.”

Like Abby, Poehler came prepared. Asked what surprised her most about the process, she considered the options for a moment, then offered the most honest one. “I know I’m supposed to answer that a lot surprised me, but a lot didn’t,” Poehler said. “I knew what I was going to do, and I knew what I was getting into, because I had directed before. And I kind of knew I knew what I was doing. I didn’t have a lot of surprises.”

And, no, the biggest lesson she walked away from the film with also wasn’t a surprise, but it was still pleasant revelation for a creator never content to do just one thing. “The best kind of takeaway was that I really wanted to do it again,” Poehler said. “When we used to improvise and people would come and do ASSSCAT monologues at the show we did, as soon as they would finish, they’re like, ‘Oh, I really want to do that again.’ That’s a great feeling.”

Netflix released “Wine Country” in select theaters on Wednesday, May 8 and on its streaming platform on Friday, May 10.