“One of the things we know about the aesthetics of fascism is that it’s willing to borrow from any and everything,” an expert on extremism tells TheWrap

The siege of the U.S. Capitol can be remembered by the dizzying visuals of it all. Amid the utter chaos and violence, there were the outlandish costumes — images of Halloween-like buffoonery that seemed to defy the seriousness of the insurrection. Rioters were photographed in face paint, dressed as war-time drummer boys and bald eagles, outfitted with the flags of hate groups and militia movements as if they were superhero capes, and clothed in head-to-toe camouflage and paramilitary gear, animal pelts, and — to the horror of several Marvel fans — Avengers-inspired “Civil War” T-shirts and Punisher stickers.

The comic book imagery was juxtaposed by real-world sounds and consequences: Trump’s inciting words at the rally preceding the insurrection, the agonizing screams of an officer calling for help as he was crushed between two doors by the mob inside the Capitol, the bang of a gunshot that ultimately took the life of a rioter, the reverberating clang of a thrown fire extinguisher as it hits — and likely kills — a Capitol police officer.

Eric Ward, an extremism expert and the executive director of the Western States Center, told TheWrap that Marvel’s popularity and prestige in pop culture makes it an “attractive target” to white supremacists, right-wing extremists and MAGA supporters.

“What they hope is that Marvel gives them a veneer of coolness around their reactionary politics,” Ward said. “It’s not ironic that the character they most identify with within the Marvel Universe happens to be … the Punisher, who is a vigilante who has almost a purist, hypocritical line around what is good and evil; feels every sense of power to define that as he chooses; and then gets to cloak his white supremacy, his whiteness, under the guise of defending the most vulnerable in a society.”

Spokespersons for Marvel and Disney did not respond to TheWrap’s request for comment.

Marvel has faced increasing pressure in recent years to retire the Punisher, reset the character, or to even be more stringent with its copyright to prevent the logo — or other Marvel IP — from being used during, say, a siege of the U.S. Capitol. The Punisher logo, a white skull worn by the murderous Marvel antihero, was in part inspired by the Totenkopf skull-and-crossbones design worn by the German military and Nazis in the 19th and 20th centuries. In recent years, the logo has been co-opted by Trump supporters, right-wing extremists and police and military groups, to the dismay of its creators. (A 2019 Punisher issue even included a scene in which Frank Castle, the vigilante, admonishes police officers for using his skull logo and supporting his violent actions.)

“The vigilante antihero is fundamentally a critique of the justice system, an example of social failure, so when cops put Punisher skulls on their cars or members of the military wear Punisher skull patches, they’re basically [siding] with an enemy of the system,” co-creator Gerry Conway said in 2019. “Whether you think the Punisher is justified or not, whether you admire his code of ethics, he is an outlaw. He is a criminal. Police should not be embracing a criminal as their symbol. In a way, it’s as offensive as putting a Confederate flag on a government building.” 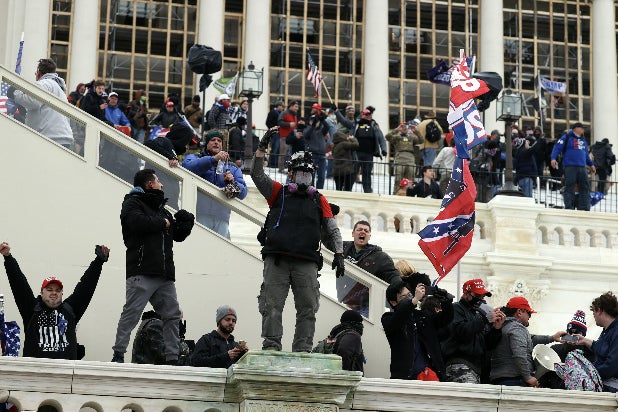 Still, pop culture has long been intertwined with the image and mythmaking of white supremacist groups — just think of the numerous Hollywood films depicting the infamous robes and white hoods of the Ku Klux Klan. Back in the ’90s, the Klan even used phrases and slang taken from hip-hop culture on their T-shirts, Kelly Baker, the author of “Gospel According to the Klan: The KKK’s Appeal to Protestant America, 1915-1930” and a scholar on white supremacy, told TheWrap.

Fast forward to 2021, and the presence of Marvel icons at the riot also works as a “pretty effective recruitment tool,” Baker said, in that it broadens the appeal of the group by referencing familiar movies and characters.

But the real irony of the Capitol insurrectionists’ use of Marvel imagery is that Marvel has had a long history of being known as the “Nazi-punching comic universe,” Ward said.

“Whether you’re talking about Captain America, whether you are talking about the Invaders, folks like Sub-Mariner, the Human Torch, Marvel was created on a host of characters who fought Nazis. One of the most iconic Marvel images is Captain America socking Hitler in the jaw,” Ward said. “One of the things we know about the aesthetics of fascism is that it’s willing to borrow from any and everything and to reset those values, and I think that’s what we are seeing with Marvel, and I think Marvel has to wrestle with that.”

The Capitol mob’s costumes also served another purpose: to serve as a distraction from the “deep and steady political violence” that was taking place, Ward said.

Ward recalled a conversation he had back in the ’90s with Floyd Cochrane, the former spokesperson for the white supremacist, neo-Nazi terrorist group the Aryan Nations.

“I asked him after he had left the Aryan Nations, ‘Why does the Aryan Nations wear these kinds of outlandish uniforms? Who is going to take you seriously in these uniforms?’ His response was, ‘We actually hope most people don’t take us seriously. If they’re laughing, if they’re taken aback by the bizarreness of it, it means they’re not really focused on our power-building strategies.’”

During the Capitol insurrection, where rioters dressed in furs dominated photos circulating on the internet and others appeared to be enjoying breaking into Congress members’ offices and stealing lecterns, those images could also serve to entice others to take part.

“If you look at the pictures from the Capitol, you can see that people are having a good time. They’re smiling; they’re cheesing it up; they’re taking selfies with statues; they’re recording it; they’re hanging out together. So you definitely get this atmosphere that it’s deadly serious, but it’s also that they’re able to hang out with like-minded people and get along here,” Baker said. “They’re finding the element of fun in this. And so I think that shows the appeal of this, that there are other people that are going to want to join in.”

But regardless of the costumes, the Capitol riot also made clear that participants of an attempted coup were not just the stereotypical working-class, rural Trump supporter, nor were they just swastika-tattooed neo-Nazis. There were real-estate brokers who flew into D.C. on private jets, CEOs, lawyers, police officers, firefighters, stay-at-home dads, and state legislators — and many of them showed up unmasked, posting on social media for the world to see.

“That’s a stereotype that people want to hold onto, you know, to say that this is fringe or this is extremist, when white supremacists look like white people,” Baker said. “This is much more mainstream than folks are comfortable with, and I want folks to be uncomfortable about that so we have some action around it.”