Shivering as she stood on the pavement edge, Jesica Beltram desperately punched the digits on her phone.

For over two hours, she and boyfriend William had been waiting for their landlord to show them the property they’d paid a £700 deposit on.

But no-one turned up.

Trying not to burst into tears outside the block of flats in Angel that miserable cold morning, the 21-year-old grew more and more anxious.

‘I called and called, but the landlord wasn’t answering her phone and I didn’t know what to do,’ remembers Jesica.

‘Then I suddenly had an ‘oh my god’ moment. I realised we’d been scammed.’

Jesica and William’s story is part of a worrying trend of rental rip-offs across the UK, with cases popping up in London, Manchester, Stoke-on-Trent and beyond.

Earlier this year the National Trading Standards Estate and Letting Agents Team (NTSELAT) warned that scam schemes involving fake landlords and bogus estate agents were on the rise during the pandemic.

Across the year the average loss per report was £1,597, however it shot up to more than double that during December.

‘Rental fraud happens when prospective tenants are tricked into paying an upfront fee to rent a property,’ explains a spokesperson for Action Fraud. ‘In reality, the property does not exist, has already been rented out, or has been rented to multiple victims at the same time.

‘The pandemic has provided criminals with a plausible excuse as to why you may not be able to view a property, helping them execute their scams.’ 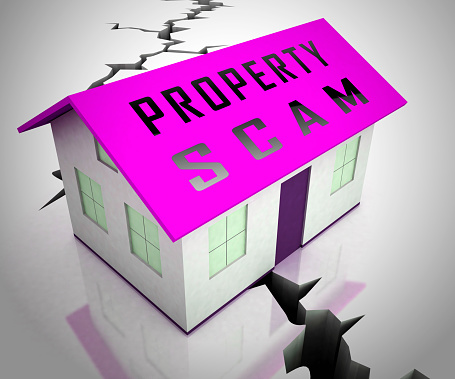 In the year ending September 2020, Action Fraud reported there were 352,132 online fraud offences recorded across England and Wales, an increase of 6% from the previous year.

The highest number of these were in London, with 65,824 cases, according to analysis from comparethemarket.com.

Looking at the rise in cybercrime from the previous year, the research posed the question: ‘did the COVID-19 pandemic and subsequent lockdowns bring out more fraudsters, or are people more susceptible to these crimes with more time spent at home and online?’

According to the review website Which?, the coronavirus crisis has created the perfect storm and allowed old scams to be reinvented.

‘Consumers who fall victim to any rental fraud scam do have avenues to recover their money, but it will depend on how they paid the scammer. Credit card payments, for example, could be covered by Section 75 of the Consumer Credit Act, making it easier to get a refund.’

When Jesica and her boyfriend William saw an advert on Facebook for a one-bed flat in Angel, North London, it seemed like the ideal place for the 21-year-old couple to start their rental life together.

When they contacted the landlord’s personal Facebook account, they were asked for a refundable £700 deposit before they viewed the flat at the weekend, as there was a high level of interest in the property.

At first Jesica and William were wary of sending money online, but after exchanging a few messages the couple felt the seller sounded authentic, so they decided to secure the property.

‘The landlord said she would only come into London to show us the flat if we paid the deposit, which seemed fair enough,’ remembers Jesica. ‘We also really liked the property and location, and were worried about losing it. Because we hadn’t done this before we thought it was normal.’

After receiving a picture of the landlord’s ID and documentation, the couple transferred £700 to her online bank account. For cleaner and shop assistant Jesica and restaurant worker William, the amount was most of their monthly furlough wage.

But then, as the young couple arrived for the viewing and waited outside the address for the landlord, they realised she was never going to turn up.

‘I was ready to cry,’ Jesica remembers. ‘Because I was meant to be moving out of my parents’ house into my own place for the first time. I just felt so disappointed.’

When a neighbour came out of a nearby house and saw them waiting, he told the couple the same thing had happened a few months earlier, leaving another victim hundreds of pounds out of pocket.

‘£700 is a lot of money, especially in the pandemic. It’s very hard,’ says Jesica. ‘We didn’t know how William was going to pay his rent on his current flat, which he shared with extended family, and were very scared.’

Thankfully the couple’s church community rallied around them and helped pay William’s rent.

However, as well as stealing their hard-earned wages, the scammer had also asked for the couple’s passports and other personal documents.

‘This is why we’re frightened, because we don’t know what she will do with the passport,’ Jesica explains.

Sharon Spencer, 58, shares this concern, having sent her job contract, passport and proof of address to a scammer posing as a landlord on the rental platform Airbnb.

‘He sent me a copy of his passport – how do I know he didn’t use someone else’s passport to defraud me?’ she reasons.

When Sharon was scammed in January, the mother-of-two was left £1,800 out of pocket, without a place for her daughter to live. What she says was worst though, was the humiliation she felt.

‘After, I received this thing from the bank called an education email. I felt like I was 90 when I was reading it, as it was full of all the things that I would be telling my mum,’ she says.

However, contrary to the image of stereotypical scam victims, namely vulnerable, tech-phobic senior citizens, Action Fraud found that over a quarter of rental fraud victims were aged 20-29 years old.

This could be explained by this demographic’s willingness and ability to shop online, and use platforms like Facebook Marketplace to find their next home rather than going through an estate agent.

Marketplace, a buying and selling platform on social media site Facebook, is where Sharon came across the flat.

She was selling her family home near Victoria Park and moving to the countryside, but wanted to ensure her daughter still had a home in London. When she found one ideally located in Hoxton, Sharon paid the £1,800 deposit through what she thought was the rental platform Airbnb.

The seller had explained over email to her that he was a British Airways pilot who rented out his flat short-term as he was often abroad for work, but due to the pandemic it was vacant and he wanted to rent it out for a longer period of time.

He reassured Sharon that he had recently sorted out the property’s council tax, and crucially, he said all payment would be processed through a secure third-party.

‘It was so plausible, I didn’t even check the link properly,’ she admits. ‘I just saw it come through Airbnb.’

With her mind at ease, Sharon borrowed the deposit and first month’s rent from an ex-boyfriend and followed the link she had received to make the payment.

‘I was meant to get the email that Friday and I didn’t, or on Saturday and Sunday,’ she says.

‘Then on Monday morning, I woke up and realised I’ve been scammed. I just burst into tears.

‘I felt angry with myself, and I really frustrated, intruded on and violated. It’s totally ruined my confidence in anyone.’

After reporting it to her bank and the police, Sharon discovered that the email had in fact come from a hoax account, set-up to look like property rental site Airbnb, having stolen the company’s logo, font and language.

In guidance on its website, Airbnb, which was not involved in any of the scams mentioned, says to only book and transfer money directly through their website. But with scammers becoming increasingly tech-savvy and even creating duplicate web pages perfectly replicating the real thing, victims are still being tricked into handing over their cash.

Under the smokescreen of the pandemic, Sharon’s scammer said he couldn’t show her the flat until after she had paid the deposit because the Landlord Association recommended landlords ‘limit the number of viewings to those who can prove they are ready, willing, and able to pay the rent.’

However, the National Residential Landlord Association stressed this isn’t the case at all.

Its guidance actually says that to avoid scams, potential tenants should try and view the property with the landlord or agent if at all possible.

However, many would-be renters have felt concerned to break from the government’s ‘stay home, save lives’ mantra, and thought securing their tenancy online seemed to be the safest approach.

When 21-year-old Richard* was offered an internship in London, Facebook Marketplace proved much more convenient for finding a flat than travelling across the country for viewings.

But when he showed his mum, Nicola*, the swanky south London flat he’d found that claimed to be rented out through Airbnb, she was worried that she couldn’t find the address on Google Earth and the property wasn’t listed on the property rental site.

‘I said to him, this just isn’t right, but he insisted it would be fine and told me not to worry,’ remembers Nicola.

He transferred the £1900 deposit, which was most of his savings, to the landlord and waited in vain for the contract and keys to be sent through.

Desperate to get his money back, Nicola says she repeatedly messaged the scammer’s Facebook account, as well as family members that she found on his page, and warned other users about him in rental groups on the site, sharing his profile picture and fake properties.

Three months since the incident, his mother is still furious – particularly as the scammer continues to list properties on Marketplace.

‘I’m like a dog with a bone – I’m his mother, I took him out shopping to buy his bedding, I can’t let this go.’

Facebook says it removes any listings that violate their policies, and uses a global safety and security team of over 35,000 people, including a team of trained experts solely focused on identifying fake and fraudulent profiles.

‘We don’t want fraudulent or inauthentic behaviour on Facebook,’ a company spokesperson told Metro.co.uk. ‘We continue to invest in people and technology to remove this type of activity from our platforms, and we urge people to report any suspicious listings, accounts or posts to us so that we can take action.’

But with thousands of properties available to rent on the platform, uploaded directly by Facebook accounts and without any verification process by the platform, it is hardly surprising that many bogus properties go undetected.

Scammers have manipulated the past year’s ‘new normal’ to con people out of millions of pounds, many of whom are in particularly precarious situations due to the pandemic.

‘It may not seem a lot of money to people, but you know, £1800 is flipping a lot of money to me,’ says Sharon, who is still coming to terms with being ripped off over her daughter’s flat. ‘Especially when I’m trying to find my kids somewhere to live and I’m still trying to pay my mortgage,’ Sharon says.

‘We’re in the middle of a pandemic and any of us might not be alive next year, yet this man is taking my money – how can a human being do this to another?’

How to avoid property scammers

Action Fraud offer the following advice for staying safe online when looking for property to rent:

Exploring the stories behind the headlines, In Focus is the brand new long read report series from Metro.co.uk.