BBC Breakfast: Naga says she ‘hasn’t got time for a quiz’

The presenters of BBC Breakfast were looking at the day’s headlines in various newspapers, when one in particular caught Charlie’s eye. He picked up on a story about “mermaids” and had some questions. As he discussed it, Naga Munchetty glared at the camera before quickly moving the segment along.

The picture showed a group of people dressed as mermaids in an aquarium. Introducing it, Charlie said: “This is one of these extraordinary images – feast your eyes on that for a minute.

“This is the underwater mermaid show. This is in China – 110 divers all decked out like that, just all got together in this pool.”

Naga asked: “Just mermaids? Any mermen?” But Charlie seemed a little unsure on what to call them. 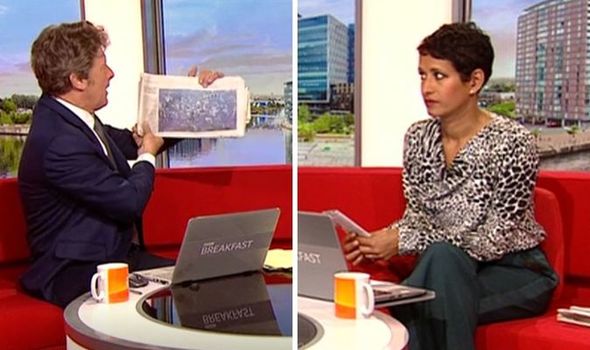 “Well I was being a little cautious with that because I was looking at some of the characters and some of them do look like mermen.

“It’s a bit like a caption competition, you think, ‘what would that hammerhead be saying?'”

“Charlie they don’t speak,” Naga cut in, glaring at the camera

Charlie explained: “No, but given the opportunity what would it be thinking? You know, there it is, just moving around, its own little space and that’s happening.

“I mean it’s kind of weird,” he concluded. Sighing, Naga said: “I haven’t got time for your quiz. I’ll do it later.”

The pair moved on to discuss the reopening of the entertainment industry, with some pilot events taking place in Liverpool in the next few days.

They later spoke to Watford Captain Troy Deeney about the sporting boycott of social media, which is set to start on Friday afternoon.

It comes as a range of sports are supporting the move in a bid to tackle online abuse.

Joining Naga and Charlie via video link, Troy said: “It’s a huge step, I think for a long time now we’ve all been talking about the impact of social media that it has on the younger generation as well as mental health.

“And I think that if we’re not going to put pressure on these huge companies to start taking accountability for some of the things that are not only said to footballers but to everyday people, we need to start really putting pressure on them and getting them to be held accountable.

“But the huge part about this is only four days, it can give people a bit of perspective on what life would be like without a huge amount of sporting stars on there.”

Viewers were quick to give their view, with one on twitter saying: “Totally agree with Troy. What ALL social media platforms need is Verification, and by that being the National Insurance Number is the way to go. No hiding then for the trolls. Well done.”

Another said: “Excellent interview Troy… I’m not a football fan, but had to look you up on here to echo my support for you and all who receive utterly mindless abuse, just awful and heartbreaking to hear.”

“What a great interview [email protected] with Naga and Troy Deeney. Hope he gets more interview opportunities like that to talk about discrimination in football as he had so many interesting points to raise. And I found a new podcast to listen to! Score,” another wrote.

BBC Breakfast airs daily at 6am on BBC.