YUNGBLUD warns me he’s “hyper” before I’ve even asked my first question.

And watching him sit. Then stand. Then jump around behind his chair, you can feel a surge of his energy even through a video call, when, with a wide-mouth grin he cries: “I AM BUZZING!” 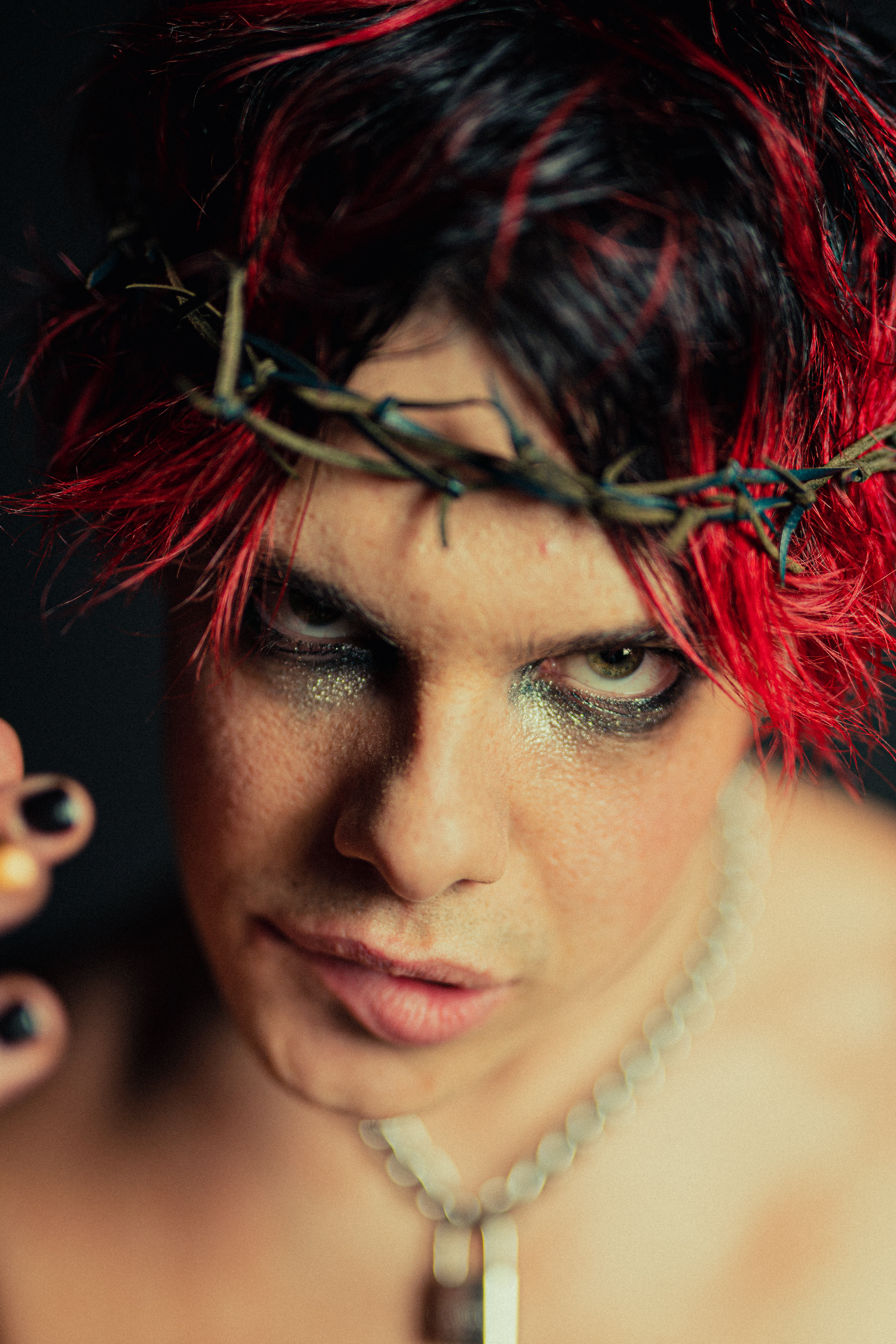 It’s clear that in the run-up to the release of his new album, the singer (real name Dominic Harrison) is excited.

He says: “I’m not sleeping. All the stress of getting everything ready — the interviews, the photo shoots — is done now. So I get to be a bit of a rock and roll star for a bit and have a laugh.”

There is no doubting he is — as he says — a rockstar.

The pop-punkster from Doncaster is a lively mix of Liam Gallagher and The Verve’s ­Richard Ashcroft, oozing self- confidence but not in an annoying way and declaring it in his ­Yorkshire twang. 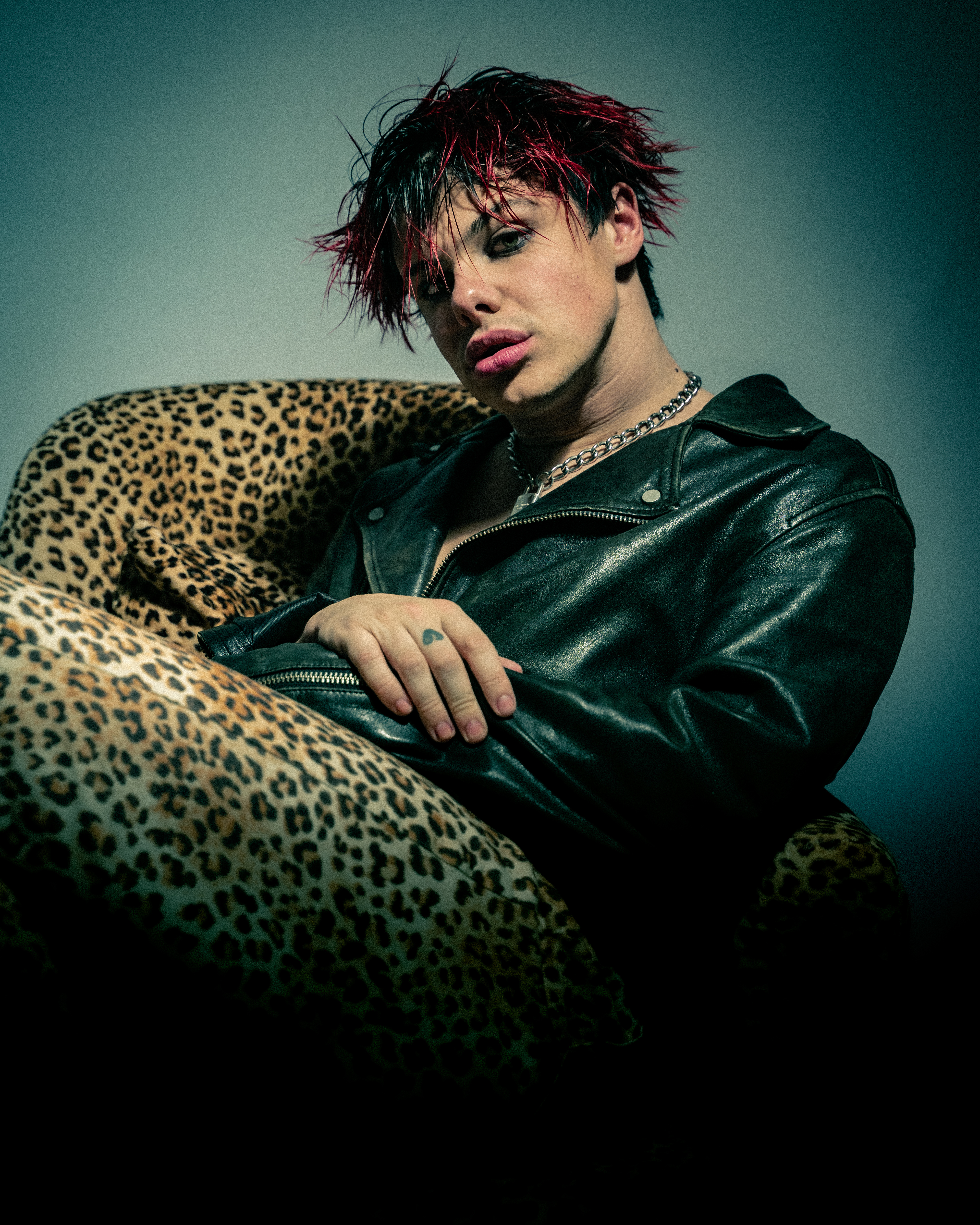 “I’m literally the most northern you could get. I’m legitimately Yorkshire tea!” he tells me.

And the younger Gallagher is a huge influence on Harrison. As are other singers including Lady Gaga, Billie Joe Armstrong, Ian Curtis, Dave Grohl, Robert Smith, Gerard Way, Jarvis Cocker and Marilyn Manson.

‘That pain also gave me confidence’

He says: “Those are the artists that shaped me because I latched on to them. I was so scared and afraid. And watching them, listening to them, they made me who I am.

“I nicked a little bit from everyone and sprinkled it all over me. I don’t give a f*** about being a product of my influences, I just want to bring Joy Division to 15-year-olds.”

Weird! is an album for anyone who doesn’t fit in. Harrison, 23, says it was born from chatting to his fans and hearing their stories about being outsiders — just as he felt growing up.

He says: “I remember ‘wear your own clothes day’ at school and I went in with my Nirvana hoodie and skinny jeans and I put eyeliner on and painted my nails. 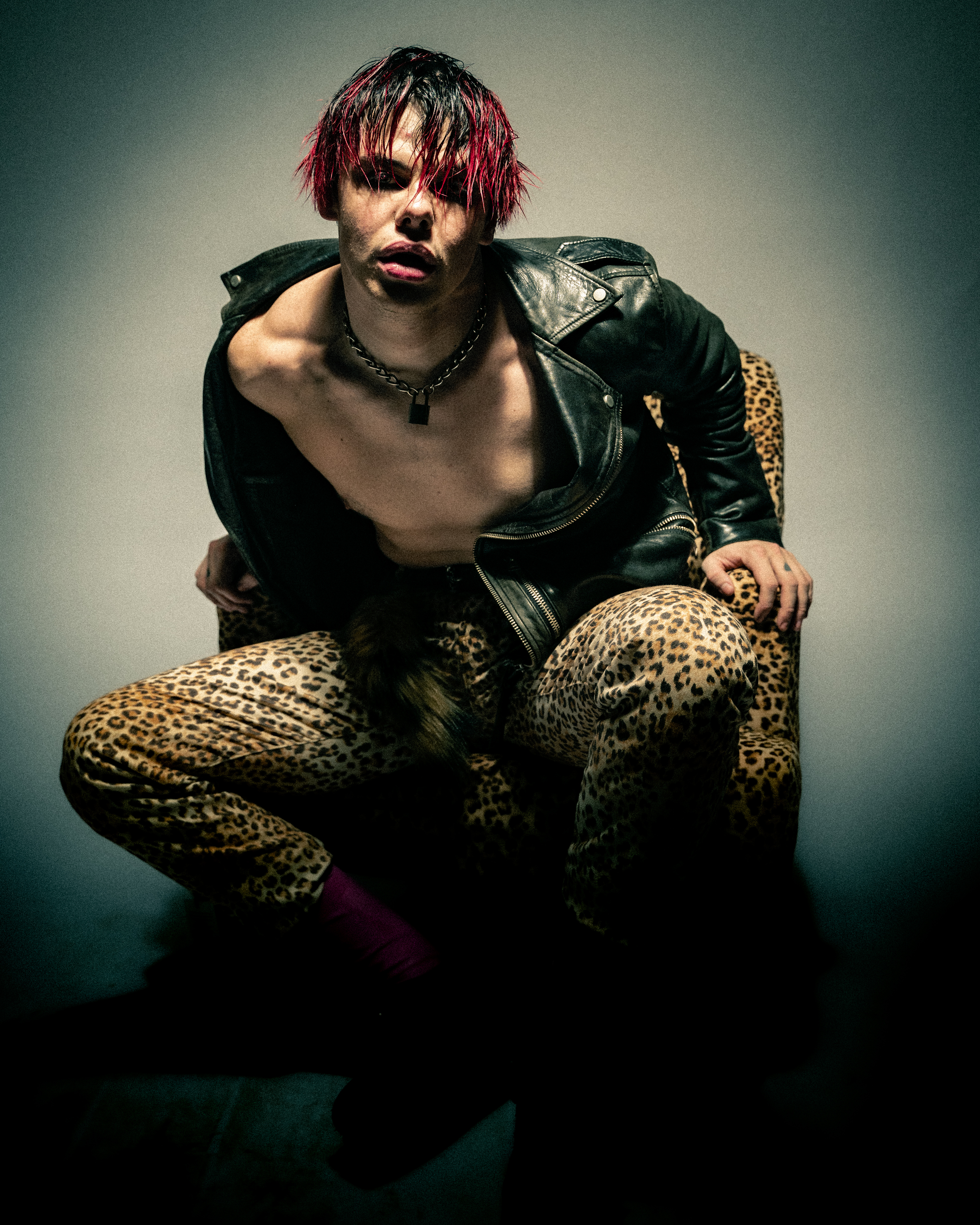 “I walked into school and this male teacher said to me in front of the whole class, ‘Boys don’t wear nail polish’ and everyone laughed and sniggered.

“I STILL remember that feeling in my stomach. But that pain also gave me a confidence. I knew I’d get out of there and was going to do something interesting. I always work hard when I’ve got something to kick against.”

Weird! is Harrison’s second album but for all intents and purposes it’s his first. He explains: “When I released 21st Century Liability (in 2018) it was like my first mixtape and this album is like my debut.

“When my first record came out, no one understood me or my point of view. I wanted to know if there was anyone out there who felt like me? I had 50,000 followers on Instagram so it turned out there was a lot of people out there like me. I found a community of people who accept me for who I really am.

“And so Yungblud isn’t me. Yungblud is Yoki in California, Charlie in Sydney and Freddy in Paris.

“This record is them and about them. They provided me this outlet to not have to hide behind this shield of angry insecurity any more. 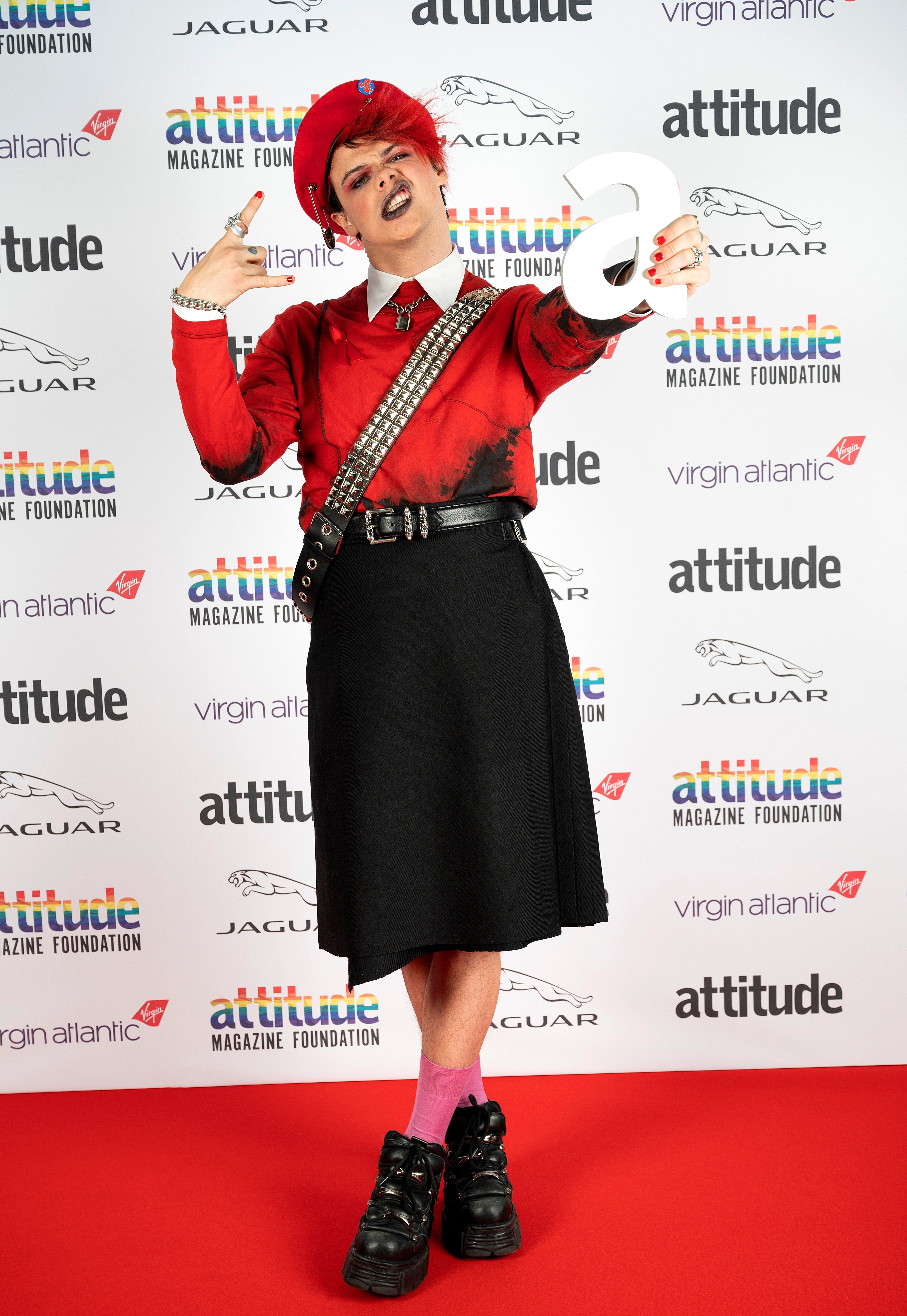 “It’s like about every kid from every continent of every shape, size, colour and sexuality talking to me and me talking to them.

“My fans have a massive impact on my life. After every show, no matter where I am, no matter how big it is I’m outside the venue every night. I just want to meet them.

“I don’t care how big I get; I’m meeting them outside even if we have to shut down the streets and get the police called out as I love it.”

In what has been the “weirdest year of our lives”, Harrison decided to call his album Weird! because “I didn’t know what the f*** I was going to call it”.

He says: ‘There’s a song called The Freak Show and I was going to call it that, but then that’s too predictable. We’re in a pandemic but I’d had the strangest 18 months of my entire life anyway.

“I nearly lost my mum in a car accident and I got big really quickly — kids were coming up to me in the street.” 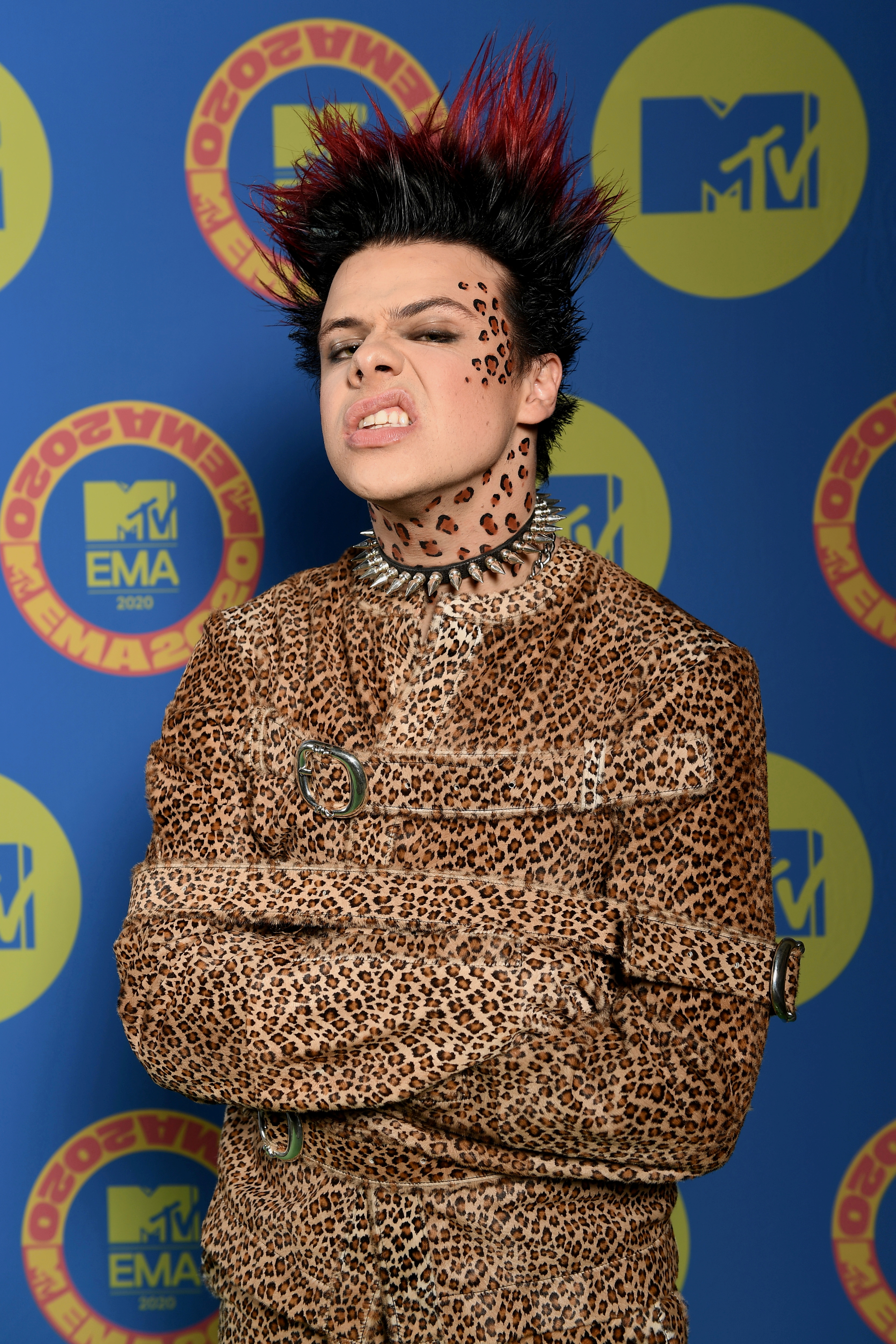 Harrison says he wasn’t ready for the sudden fame he experienced and found the online attention hard to deal with.

‘During a 4.30am walk I began writing lyrics’

“No one can prepare you for it,” he tells me. “I had everything I f***ing wanted, but I was still depressed and anxious. But even though I was lost, my fan base slapped me in the face and I woke up.”

On his sudden rise to fame, Harrison says: “I remember being on the bus in Paris, and when we came on UK soil, it just erupted. Two years earlier, I’d been living in a two-bedroom flat with two of my band.

“Live electrical wires were on show and damp was dripping down the wall. We’d stay up smoking all night watching films on Kasabian and Foo Fighters, dreaming of playing venues like Brixton Academy.

“Then bam! like hitting fast forward on a movie, seeing everything in double time — we were playing Brixton Academy.”

It was after this momentous gig in 2019 that he started his new album. 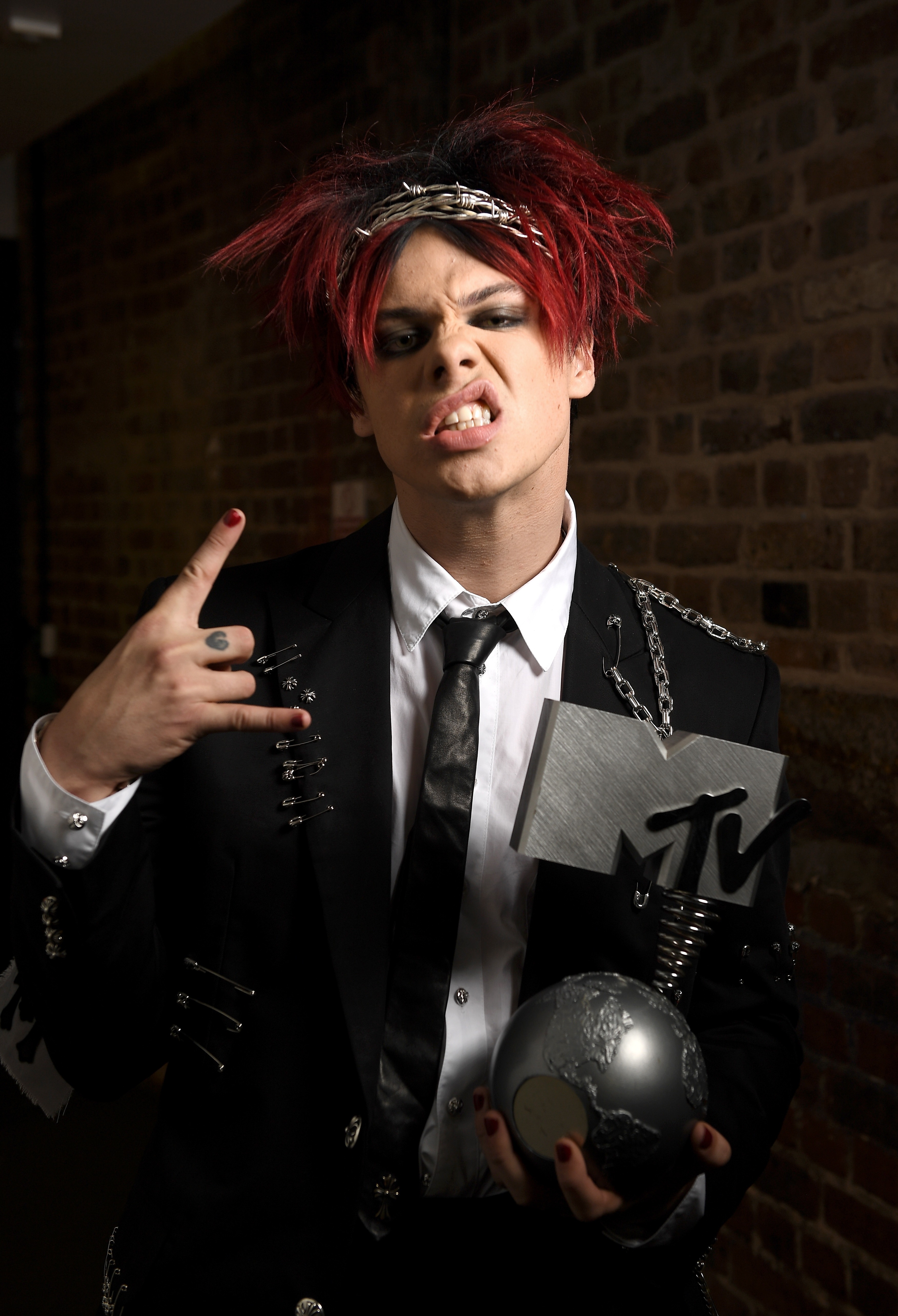 He says: “When we finished Brixton I obviously couldn’t sleep and so I walked to Primrose Hill at 4.30am and started writing lyrics ‘I can’t sleep at this time, I’ve got Jesus on my mind . . . ’ That poem became the song Weird!”

Highlights on the album include the energised Superdeadfriends, fragile ballad Love Song and God Save Me. It’s 12 tracks to lift you from the doom and gloom of these times.

“With Superdeadfriends I wanted something like the Beastie Boys mixed with Happy Mondays. The album was getting pretty emotional.

“I was like, ‘We need something to knock their f***ing heads off, we need something dangerous’ and I thought about a night we played in Milan and this captured that tempo and feeling.”

The stripped-back Love Song shows off Harrison’s soulful voice. It’s a song about his break-up with Los Angeles-based Halsey, whose real name is ­Ashley Frangipane.

“It was my first heartbreak. It just wasn’t meant to be for us,” he says. “That doesn’t mean we don’t love each other in some sort of way. I have such respect for her as an artist. 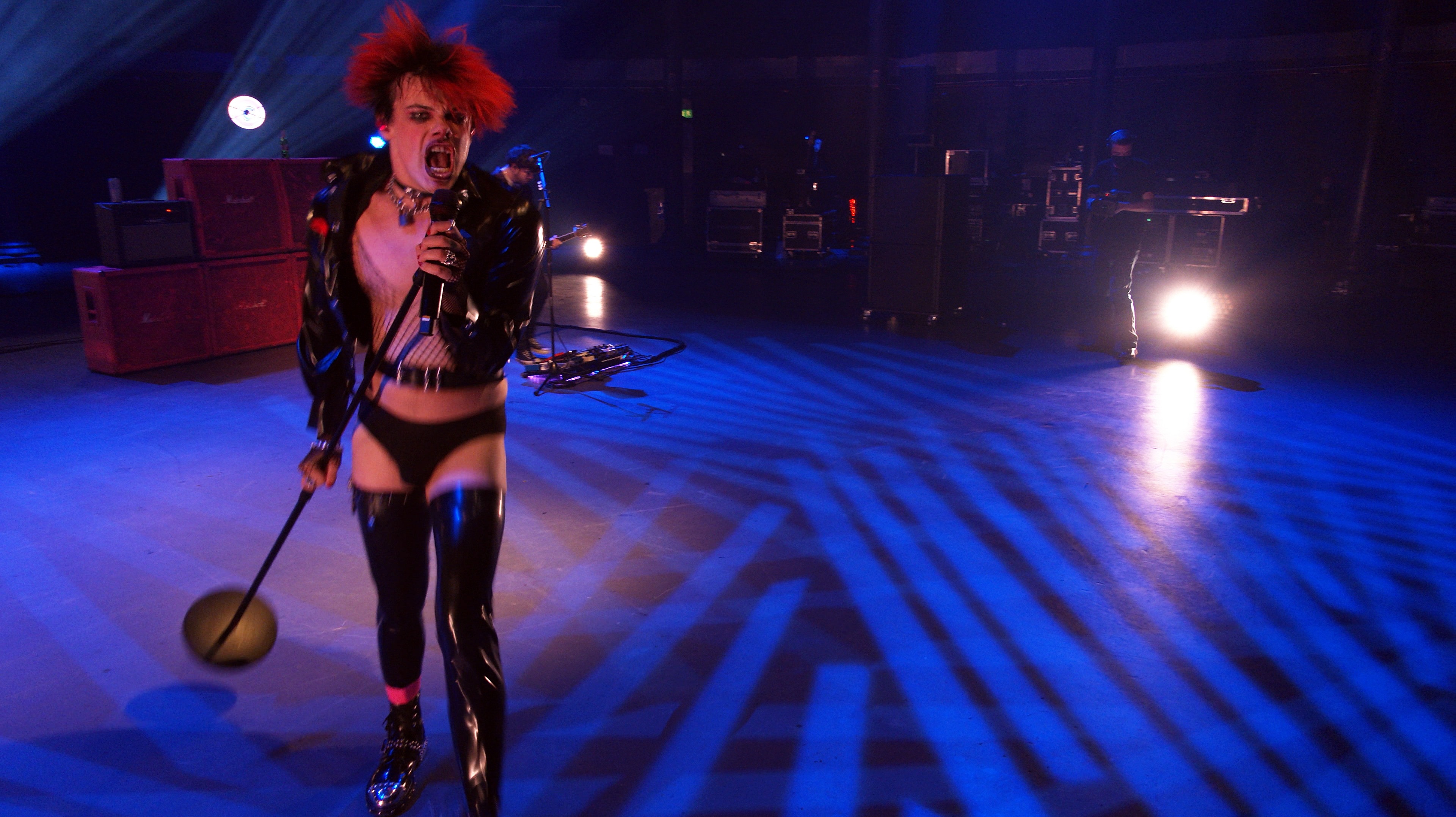 “I think she’s a genius. She taught me a lot and I like to think I taught her a lot as well. It’s very easy to use a Hollywood relationship as ammunition to get you more press or keep you relevant but our love wasn’t that, it was deeper. It was the real thing.

“I’ve been labelled bratty but that song shows my vulnerability. I can’t be put into one box.”

Getting over their split was tough and he says he’s now focusing on himself, his family and fans.

‘Mum ends up in the mosh pit at gigs’

“Splitting up from Ash was painful but it gave me time to focus on myself.

“I’ve got a lot to do. I’m just gonna be the best f***ing person I can be. I’m always trying to bring happiness to people because I’m in such a good place right now. Every day I wake up and think, ‘I’m going to make people feel good today’.”

Harrison is close to his parents and two younger sisters and is proud of how his mum Samantha recovered from her near-fatal accident.

“She’s good. She literally broke her back in two places and had a punctured lung,” he says. 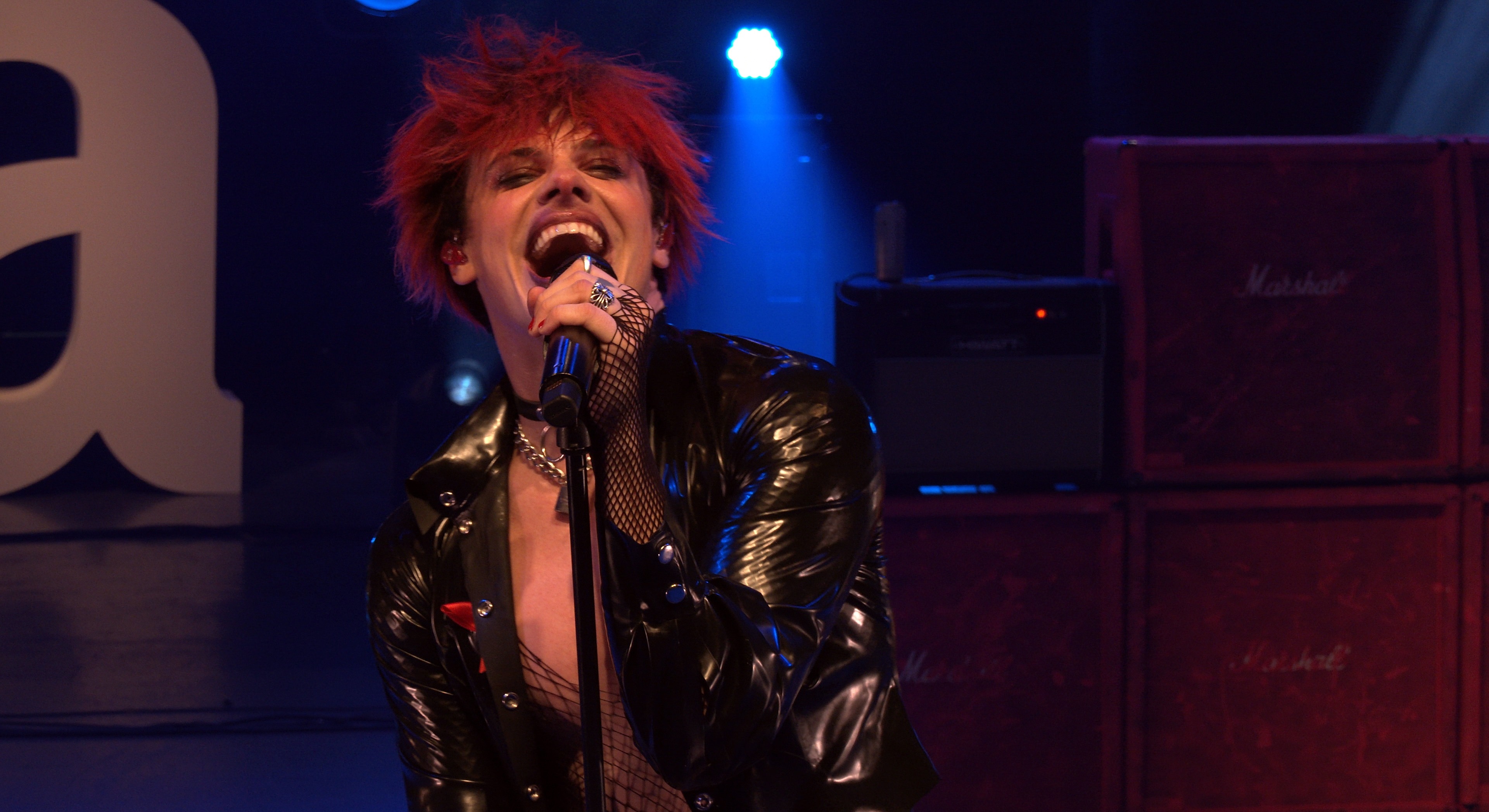 “We nearly lost her, but she recovered in six months and used the insurance cash to open a cake shop — something she’d wanted to do her whole life.

“She’s the proudest mum and has always supported me and my music. She buys the newspapers that I’m in and introduces me to all her friends.

“I have to watch her at gigs as she ends up in the mosh pit which terrifies me as I know how dangerous it is.”

Harrison has recently bought his first home in London — a warehouse-style apartment he’s keen to show me through his camera’s lens.

He says: “Look around. I’ve been enjoying spending time here. Even though I’ve spent a long time in America and signed my record deal there.

“But when I was there for the first lockdown, I missed England. I missed pints, rollies, Tesco and even Costa. But I’m a British artist and I want my album next to The Verve, Amy Winehouse, Keane, the Arctic Monkeys and Oasis.

“I want Weird! to be a fundamentally big British statement album. I wanted it to be a neat whiskey of life that burns the back of your throat.”

Keen to stress he’s the real deal, Harrison tells the story of a clash he had with a US music industry executive who confronted him at The Grammys. He says: “He was a bit drunk and so the next couple of times we met it was a little bit awkward. 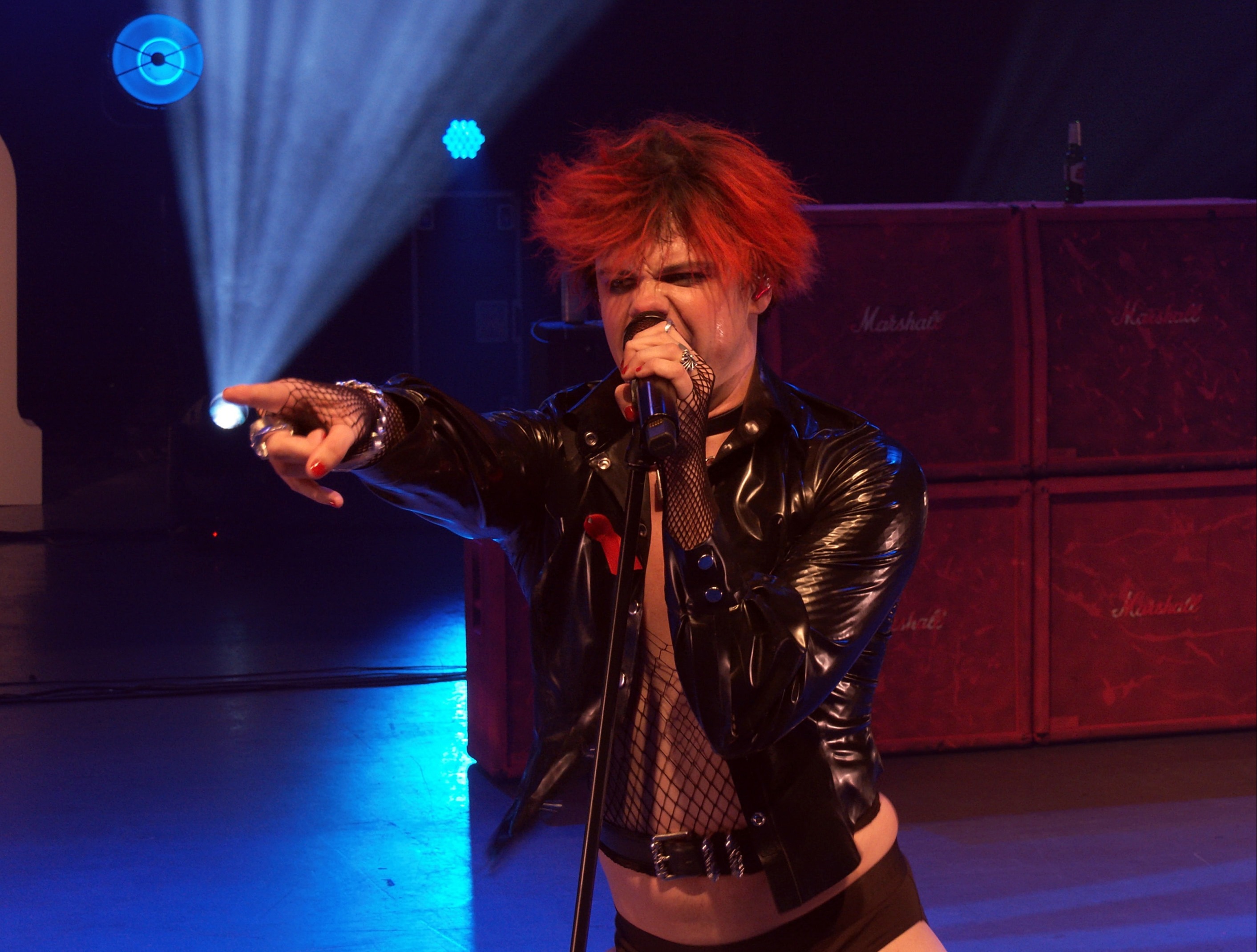 “But he was like, ‘I don’t get it. What’s the formula, man?’ And I was like, ‘I haven’t got a f***ing clue’. It’s legitimately just me having a conversation with about three and a half million kids and our connection.

“And it’s getting bigger and bigger and so one day I can play Knebworth.

lThe album Weird! is out today 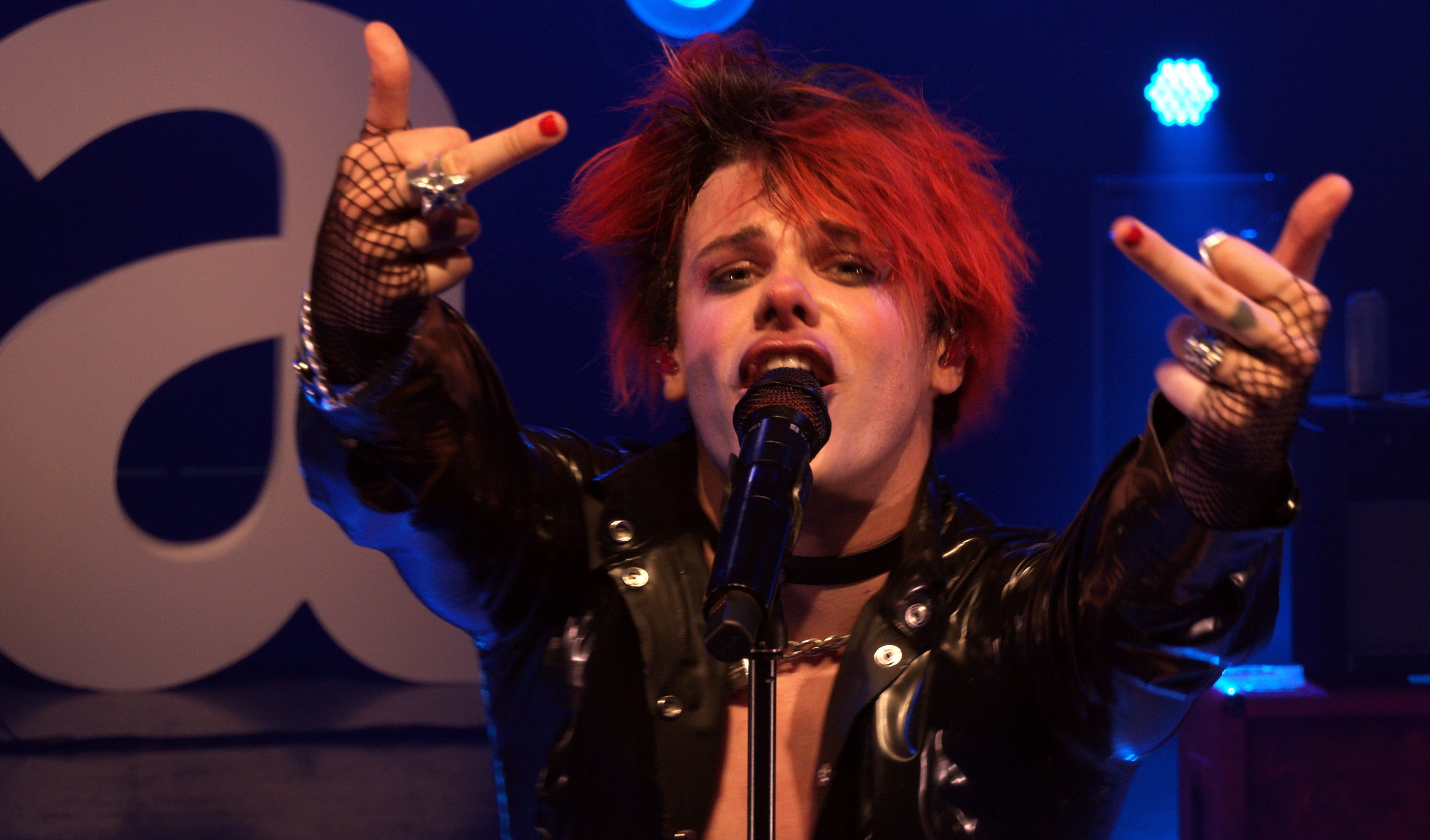