Who Wants to Be a Millionaire welcomed another batch of contestants hoping to win up to £1million this evening. ITV viewers saw a familiar face this evening as returning player from yesterday’s instalment Gareth was looking to top-up his prize fund. However, after securing a healthy £32,000 tonight, Jeremy stepped in as the player tried to walk off after his time on the show had come to an end, telling him: “I’ve got more torture for you.”

BREXIT BULLETIN: Sign up for our special edition newsletter with exclusive insight from this week’s crunch talks

Gareth returned from last night after being on fine form and racking up £16,000 after some very good luck.

However, his winning streak ran out after he managed to secure £32,000 this evening.

The player had answered a question related to the film Jumanji correct but had become stumped on his £64,000 question.

Jeremy asked: “Two of Ian Fleming’s books ‘Chitty Chitty Bang Bang,’ and ‘You Only Live Twice,’ were adapted for the big screen by which author?” 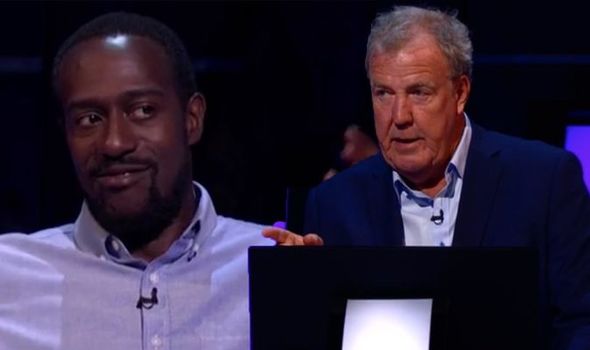 Unfortunately, Gareth had no clue and decided not to play and take home his £32,000 fund.

Gareth proceeded to get up from his seat after securing his prize money but Jeremy stepped in and told him: “I’ve got more torture for you.”

Gareth revealed he would have gone for William Goldman if he had to play the question but luckily, the answer was incorrect.