Who Wants To Be A Millionaire: Contestant told ‘don’t argue’

Jeremy Clarkson, 60, was on hand to try and help Victoria walk away from her time on Who Wants To Be A Millionaire with a grand cash prize. The contestant was the second player to take part in the latest episode of the ITV quiz show. However, when she opted to use her Ask The Host lifeline, the presenter told viewers “not to argue” with him over his knowledge of cocktails.

The question at hand was ‘What is the name of the cocktail consisting of vodka, coffee liqueur and cream?’

Unsure as to the right solution, the contestant asked Jeremy for his take on the cocktail question and he soon recalled his own expert knowledge.

“Margarita is not that. Strawberry Daiquiri obviously isn’t that – now Daiquiri was invented in the Floridita in Havana,” the host began.

“Tom Collins is a gin sling. It’s just known as a Tom Collinson in some parts of the world and a gin sling in others,” he continued. 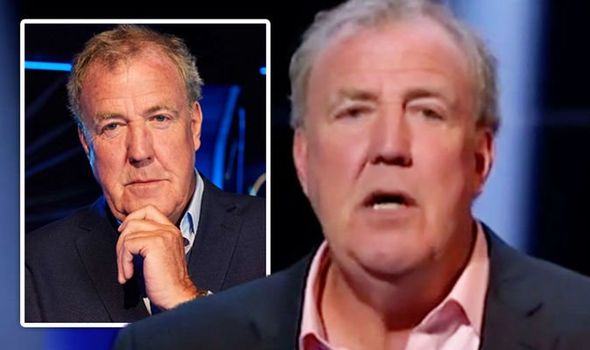 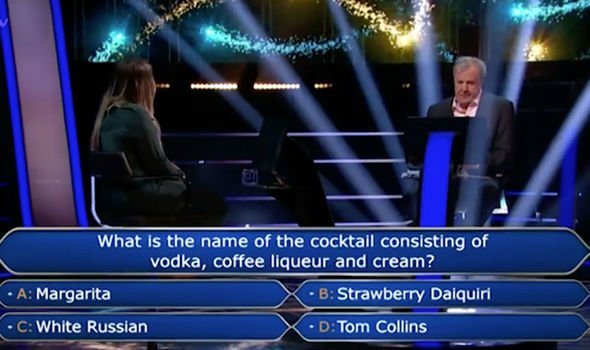 Knowing some viewers would disagree with him, the presenter warned those watching at home: “Don’t argue [with me].

“That’s what I think and I know it to be so which means by the powers of deduction, it must be and it makes sense for it to be vodka.”

Taking to Twitter, it seems viewers had heeded the presenter’s warning as they simply discussed the idea of a Tom Collins.

One wrote: “#WhoWantsToBeAMillionaire Tom Collins because it uses Hayman’s old Tom gin,” with another posting: “Don’t mix up Tom Collins with a John Thomas #whowantstobeamillionaire.” 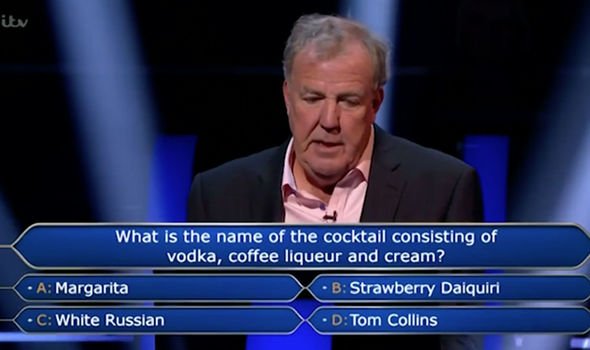 Who Wants To Be A Millionaire: Contestant wins £32,000

The host was correct with his knowledgeable guess of vodka as Victoria proceeded to complete several other rounds.

However, her time was up when the contestant decided to walk away with a total of £32,000 instead of risking losing everything she had accumulated.

Before Victoria took on the game, the first contestant up to the hot seat was Dylan and he managed to walk away with over a quarter of a million pounds.

Watching his battle with the answers at home, some viewers seemed to notice the player was drinking a substantial amount of water.

Each contestant is always given a glass of water to drink whilst playing the game, should they need to lubricate their throat.

Between each question, Dylan was seen sipping on the liquid sat in front of him and viewers commented about this on social media.

One wrote on Twitter: “Cracking job tonight Dylan. Finally, the world gets to see the freakish amount of water you consume a day. The kids are going to be so excited at school tomorrow! #WhoWantsToBeAMillionaire.”

Another added: “I wonder how many glasses of water Dylan went through, he was a thirsty man #WhoWantsToBeAMillionaire.”

Whilst a third remarked: “Let’s hope they refill Dylan’s water glass during the break or he won’t know what to do every 30 seconds #whowantstobeamillionaire.”

“There will now be a commercial break so the production staff can refill his glass with water… #whowantstobeamillionaire,” a fourth declared.

A sixth commented: “This chap is going to need toilet soon drinking water by the gallon #WhoWantsToBeAMillionaire.”

The contestant did remain seated for the entirety of the game and was congratulated by Jeremy for scoring £125,000.

Who Wants To Be A Millionaire airs Sundays at 8pm on ITV.