Jeremy Clarkson, 60, picked up Tuesday’s show where things left off from Monday’s instalment of Who Wants To Be A Millionaire with contestant Callum building up quite the jackpot. The player set his safety net at £64,000 and it seemed he could be the lucky person walking away from the ITV quiz show with the full total in his back pocket. However, as the contestant hit the £500,000 checkpoint, he was dealt with a question he was unfamiliar with and used the Phone A Friend lifeline – which he thought was his last. As a result, the host had to step-in and seemed quite put off the player had forgotten help from the presenter was also an option on the cards. 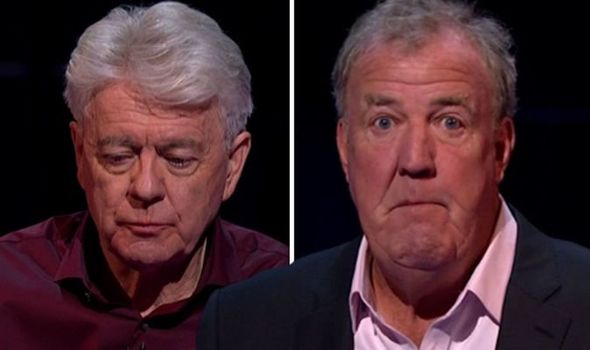 The question was: “In 1930, who became the first non-American to be named Man of the Year by TIME Magazine?” with the possible answers being Joseph Stalin, Albert Einstein, Mahatma Gandhi and Haile Selassie.

After his friend failed to help him, Callum was left stumped with what to do next and was about to call it a day with £500,000 in the bank.

Jeremy then jumped in as he realised the contestant was about to make a huge error and said: “Can I just remind you of something?

“You may be maybe overexcited or you may think I’m completely useless or I may have no idea but you do still have one lifeline left.”

The player replied: “That was well reminded, I had forgotten. I thought I had used you for the Formula One question.”