When equestrian Randy Savvy saw “Nope,” he was impressed with Daniel Kaluuya’s ease around horses. Savvy knew it was a sign of the actor’s process coming to fruition: To prepare for his part as Hollywood horse trainer OJ Haywood, Kaluuya reached out to the co-founder of the Compton Cowboys for lessons in horsemanship. It paid off. “In order for him to fully and authentically execute his role, he wanted to be able to get some experience and some insights from guys who are already essentially living that role. Like we do this, we’re Black men, we work with horses in Hollywood,” Savvy told IndieWire. “So for him, connecting that link was important. And he ended up getting some good takeaways from it. I saw some stuff on the screen like, okay, bro, I see you.”

Jordan Peele’s alien thriller has a rare relationship to animals on screen. Not only is it a quasi-Western, featuring Kaluuya astride a steed named Lucky, it’s also about the people who put horses in movies, giving the entire operation a meta quality. OJ and his sister Emerald (Keke Palmer) are the current owners of Haywood’s Hollywood Horses, a business founded by their father (Keith David), who claims the family are descendants of the Black jockey in Eadweard Muybridge’s “The Horse in Motion.” The Haywoods’ equestrian knowledge quickly becomes more than just backstory as the plot unfolds, putting them at an advantage when dealing with the UFO circling over their Agua Dulce ranch.

While the horses on set were handled by veteran wrangler Bobby Lovgren (“War Horse,” “Seabiscuit”), Kaluuya, via his manager, reached out to Savvy to glean the lived experience of a Black horseman. They spent a couple of sessions on the Compton Cowboys’ ranch, where Savvy showed Kaluuya basic skills and fielded questions from the British actor. “Mostly I talked to him about just the energy and the synergy between human and horse,” Savvy explains.  To Savvy, some Hollywood horse training and cowboy culture can rely on submission and fear. “And our way is always about loving the horse and asking the horse as opposed to telling the horse what to do,” he said.

All Savvy knew from the plot of “Nope” when Kaluuya arrived was that he was playing a cowboy; the rest of Peele’s eerie plans were kept under tight wraps. But Savvy, also a , has a vested interest in the representation of Black equestrians on screen. Self-described as “a collective of lifelong friends on a mission to uplift their community through horseback and farming lifestyle, all the while highlighting the rich legacy of African-Americans in equine and western heritage,” the Compton Cowboys are set to be the subject of their own film. They received national attention when they led a protest against police violence in their Los Angeles neighborhood following the 2020 murder of George Floyd, and also run a youth program called Compton Jr. Equestrians. (Universal is donating some of the proceeds from a “Nope” merch collection to the organization.)

Savvy worked with Kaluuya on how to mount, how to tack, and how to wrangle a horse in an arena. They also worked on simply being comfortable around the animals. “I remember one of the first things we did was just practice being loose,” he says. “Because what happens is, people are anxious around horses because they have this preconceived notion that horses are dangerous animals, right? So people naturally have anxiety based on that. And so it kind of relays when they’re dealing with the horse, you kind of sense a tension, and their body language seems stiff and tense.”

When Savvy finally saw the film, he saw his teachings manifested in Kaluuya’s performance. The actor plays OJ with an unflappable quality that extends even into the most high energy sequences. “There were certain scenes where he was galloping, and he looked very loose on the horse, and looked cool and chill, and he didn’t seem stiff,” Savvy said. “Or there was a part where he was dusting off the saddle and putting the girth up on the hook, and I just remember looking at that and being like, ‘Oh, that was a very natural way he did that,’ you know, as opposed to be seeming kind of like a rookie at it or something.” 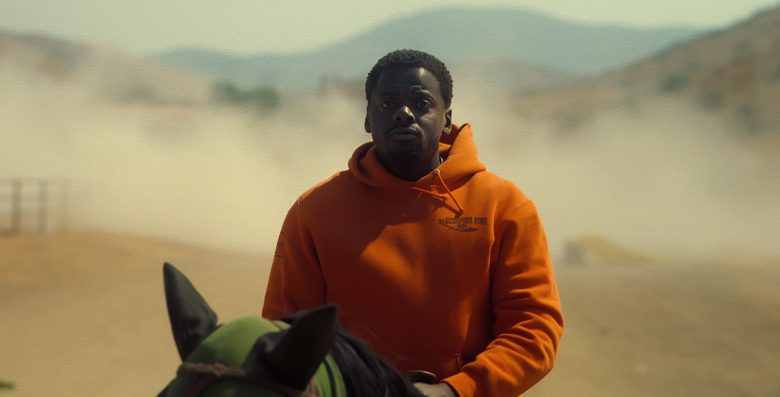 Though Savvy admitted he thought the movie was “strange,” he found its depiction of working with horses on sets to be accurate, specifically in a scene at the start of the movie where a horse is spooked after the crew doesn’t pay attention to the Haywoods’ safety warnings. He also appreciated that the filmmakers didn’t try to anthropomorphize the equine characters. “A lot of people don’t have the right horse consulting on the project,” he said. “It could easily come off as fake or cheesy or inauthentic. And so I think they overall did a good job of letting the authenticity speak.”

As OJ, Kaluuya is intentionally withdrawn, but there are moments where you see his connection to the animals, like when he tenderly reassures Lucky that he’s going to be safe during the final showdown. It’s the lessons of Savvy and the Compton Cowboys coming through. “What we do is we have a very respectful countenance when it comes to the horse, being grateful, expressing gratitude, always saying thank you,” Savvy said. “He was really touched by that, and I think that really showed through in the way that he delivered his role in the film.”