70 women landed 76 nominations of the 235 nominees this year, slightly up from last year when a previous record 31% were women 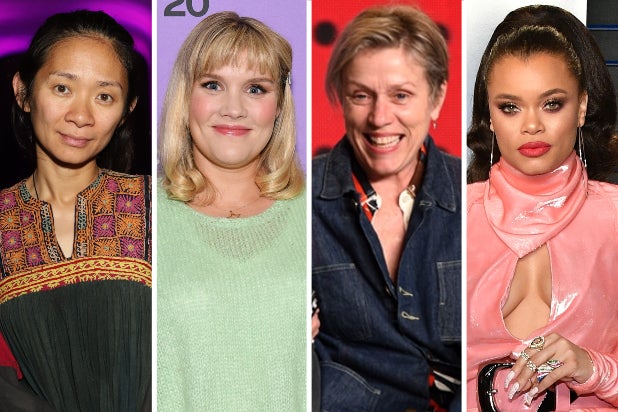 A record 70 women landed 76 nominations for 2021’s Oscars, the highest total ever.

In TheWrap’s analysis, individuals nominated in multiple categories, like Chloé Zhao and Emerald Fennell, were counted for each of their nominations. The count also does not include nominees in Best International Film, which officially goes to the country of origin.

Beyond the numbers alone, this was a year of exciting firsts; Zhao and Fennell together became the sixth and seventh women to be nominated in the Best Director field, the first time two women have ever been nominated for Best Director. But Zhao also set a record as the first woman to ever receive four nominations in a single year, scoring nominations in Best Director, Best Film Editing, Best Adapted Screenplay and Best Picture as a producer. Fennell also became the third woman to land three nominations in a single year, joining the ranks of Sofia Coppola and Fran Walsh, who both last accomplished that feat in 2003.

And of course this year, nine of the acting nominees were nonwhite, another first when only seven, both in 2007 and 2017 were nominated in the past. That’s thanks to first time nominees such as Andra Day and Yuh-Jung Youn.

“The nominations today are a step in the right direction and reflect progress toward greater inclusion. There is still room for growth if people like Regina King have not been nominated, and while we celebrate the ‘firsts’ this year, we hope these are not the ‘only,’” USC Annenberg Inclusion Initiative’s Dr. Stacy Smith told TheWrap. “Often there is a ‘one and done’ mentality when it comes to inclusion, so it is imperative to see sustained effort in the future to ensure continued recognition of talent from all backgrounds.”

This year, 7 of 23 of the nominated producers were women, which is down from last year when 9 of 24 were nominated. Though Christine Oh for “Minari” scored her first nomination, and Frances McDormand is one of only three women (and 20 people) to be nominated for both Best Actress and Best Picture in the same year, not necessarily for the same film.

While women were well represented in the Best Song category, other below the line fields were still absent any female nominees, including Original Score, which last year had a landmark when “Joker” composer Hildur Guonadottir was the seventh woman nominated in the field and would later go on to win.

This year, women directed a record 27% of the eligible films for Best Picture, which also demonstrated growth from past years when looking at the industry as a whole.

The 93rd annual Oscars take place on April 25. Check out the full list of nominees for 2021 here.