The world that Alice Waddington dreams up for her feature directorial debut, “Paradise Hills,” is really not so different from the world many people live in today — stratified classes, women only defined in relation to their husbands, a premium on appearance over substance — but Waddington attempts to pull those cultural and societal wounds into a fresh perspective. It’s not an entirely successful endeavor, but at least for its dense first act, it’s a compelling one that shows off Waddington’s knack for world-building and eye-popping visuals. A feminist fairy tale with a generous sprinkling of “Alice in Wonderland” imagery and enough crinoline to outfit an entire cotillion, “Paradise Hills” soon gives itself over to the most obvious of questions and answers, unearthing nothing new in the process. Are people bound by their social class? Yes. Are women still treated like second class citizens? Often. Are people obsessed with how things look? Obviously. So, what’s left? Waddington doesn’t bother looking.

The film opens at a fittingly lush, fanciful, and entirely strange wedding, where a nearly unrecognizable Emma Roberts (blame the heavy makeup and a hellacious headpiece) has just entered into unholy matrimony with a dead-eyed rich dude (Arnaud Valois, dimming all his charm from “BPM”). The guests are thrilled, and her mother (Nancy Jack) couldn’t be more pleased to hear that young Uma is the “epitome of upper perfection.” Clearly, that’s something that involves being subservient and as dead-eyed as her new mate, as Uma is soon tasked with trilling out a song to her new hubby, a dirge assembled entirely around the idea that she’s his servant. So far, so patriarchal. When it’s time for the pair to consummate their marriage, Uma is nearly limp, broken enough that “Son” (he never gets another name) can’t help but comment how she changed she is, how so very different than she used to be, as if that girl doesn’t exist anymore.

Two months earlier, she didn’t. In flashback, we find a filthy, disoriented Uma trapped in a room that’s equal parts cement and silk sheets. Told over an intercom she’s in “paradise, of course,” Uma doesn’t quite buy it (why would she? why would anyone?), and attempts to flee her odd new home. It’s a lush island, but a foreboding one, and as she runs to its literal edge, it’s obvious she’s not going anywhere soon. But where is she? At least there’s the smooth-talking Duchess (an extraordinary Milla Jovovich) to explain, terming the joint “a center for emotional healing” that will sooth Uma into what she alleges is a happier life, clearly just another word for compliance. 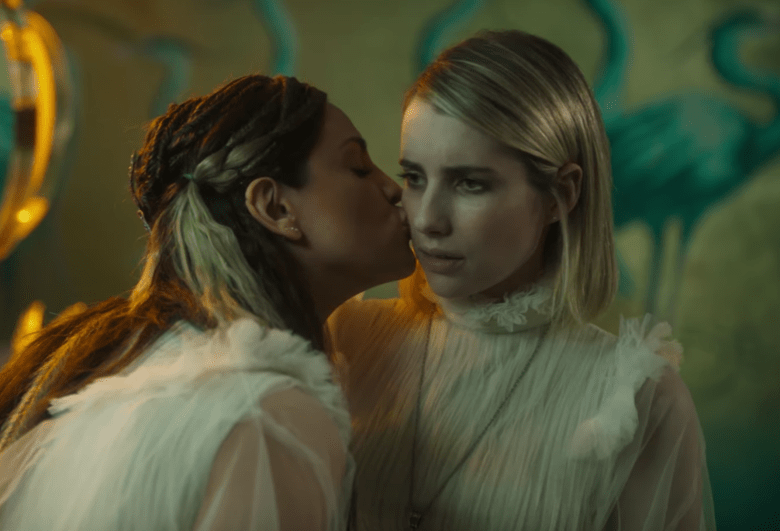 Uma is mystified by the entire endeavour, but her soon-to-be-introduced roommates have other ideas: Chloe (a mostly wasted Danielle Macdonald) is enthused about the possibilities of a free vacation, even as she touts that she’s just fine the way she is (the lessons of “Paradise Hills” are necessary, but always terribly obvious), while the anxious Yu (an initially unrecognizable Awkwafina) just wants the whole thing, weirdo roommates and all, to go away. Soon, disgraced pop singer Amarna (Eiza González) joins the fold, and the foursome set about intermittently embracing and fearing the initiatives handed down by The Duchess. Much like taking acid at an all-inclusive resort, there are some good things (incredible costumes from Alberto Valcárcel, three built-in new best friends, free therapy) and plenty of bad (muted screaming the next room over, bad food, dreamless sleep, the understanding they’ve been sent away because their loved ones despise who they are).

For its first act, “Paradise Hills” excels at its primary purpose: highly imaginative world-building with a timely edge. As Uma plunges deeper into her apparent therapy, the film pushes into the absurd, but with a discernible reason. Everything is on the table, and Waddington’s affection for excess is impressive enough to make silly stuff work (this is, undoubtedly, a director with a point of few and the visual acumen to sell it). Therapy runs the gamut from soul-breaking chats with The Duchess to truly demented exercises that involve a giant carousel horse. That’s where the girls are forced to observe, from said horse, amusingly off-kilter videos meant to brainwash them; Uma is subjected to a claustrophobic presentation featuring dim bulb Son, punctuated by deranged vignettes in which he tries to prove his sensitivity by thrusting forward flowers and his strength by doing pushups on the edge of the Grand Canyon.

Uma has, of course, been forced into The Duchess’ loony paradise because she refuses to marry dum-dum Son, a rich kid (in “Paradise Hills” parlance, an “upper”) who might help her tarnished family rise out of their financial rubble. Too bad she’s in love with a “lower” (you get it) in the form of the vaguely appealing Markus (Jeremy Irvine). It’s a basic plot for a film that, for all its flourishes, eventually crumbles into utter predictability. Its early edge of humor is woefully missing by its messy second half, when heavy-handed dialogue takes over and unearned evolutions and bizarre backstabbing take the place of actual character development. 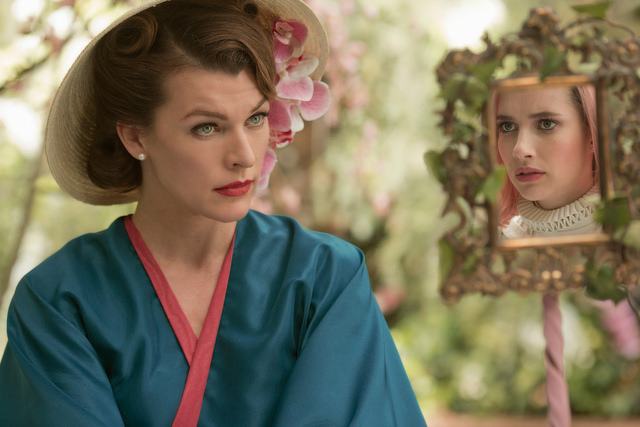 The initial concept of “Paradise Hills” is discomfiting enough to drive plenty of stories, but the script (from Waddington, genre fave Nacho Vigalondo, and Brian DeLeeuw) soon starts grasping for imagined dramas to push it to its final revelations. Though Uma has been cast aside because of her choice of mate, “Paradise Hills” throws in a growing attraction to someone else (even after Markus, implausibly enough, appears on the scene) that detracts from her central storyline, one that appears to be shoehorned in just to give another character literally anything to do. Eventually, the entire film hinges on it, as if the film’s creators were suddenly convinced that their creative storyline wasn’t enough to drive the film’s entire second act (they were wrong).

As “Paradise Hills” chugs towards its big reveal — guess what, the “center for emotional healing” is not at all what it seems! — the film piles on more weirdo mythology and big questions about the nature of capitalism, patriarchy, and being yourself. It’s a lot to take in, and “Paradise Hills” isn’t up to the task beyond presenting concepts, gussying them up with florid accoutrements, and hoping it’s all dazzling enough to obscure how thin the entire endeavor is. “Paradise Hills” posits that its entire world is a shell game built on outdated ideas and a resistance to originality, but it’s the film itself that’s most woefully unable to ever go anywhere new.

Samuel Goldwyn Films will release “Paradise Hills” in theaters on Friday, October 25 and on digital and on demand on Friday, November 1.