Nella Larsen’s 1929 novel, Passing, was part of a tradition. Writers, both Black and white, had been depicting the practice of extremely light-complexioned African Americans slipping into the white world for at least 70 years prior. Passing literature is the term critics have applied to it. In a racially segregated and stratified society, passing was powerful fodder for the literary imagination. Being discovered came with the risk of shame, violence, incarceration, and even death. In Black communities, passing itself was at once frowned upon and protected, as the secrets of passers were guarded.

Understandably, depicting passing today, when the rules of racial membership have shifted, is challenging. Members of Generation Z are skeptical of the historic “one-drop rule” of African-American membership. Initially, that rule was a way of marking Blackness as inferiority and even a sort of contagion. Over time, African Americans used it to develop an expansive idea of what it meant to belong to “the race.” But today, young people often wonder how much one can claim to belong to a group without carrying the weight of being seen as such.

Passing was powerful fodder for the literary imagination.

Director Rebecca Hall, who adapted the 1929 novel for the screen nevertheless succeeds in making a film that brings contemporary viewers into the intimate realm of its Black women protagonists, both of whom “pass”; one completely, the other conditionally. Most impressively, Hall captures the tensions of passing in a manner that is effective in the 21st century. Whereas the novella is a masterpiece of sumptuous yet suggestive prose, the black-and-white film’s luxuriousness is found in texture, light, and gesture. Hall avoids a problem that all too often afflicts Black actors. When directors fail to shift light appropriately, bodies that are luminous too often are made muddy and shapeless. Hall’s effective light is not just visually satisfying; it is a narrative tool. 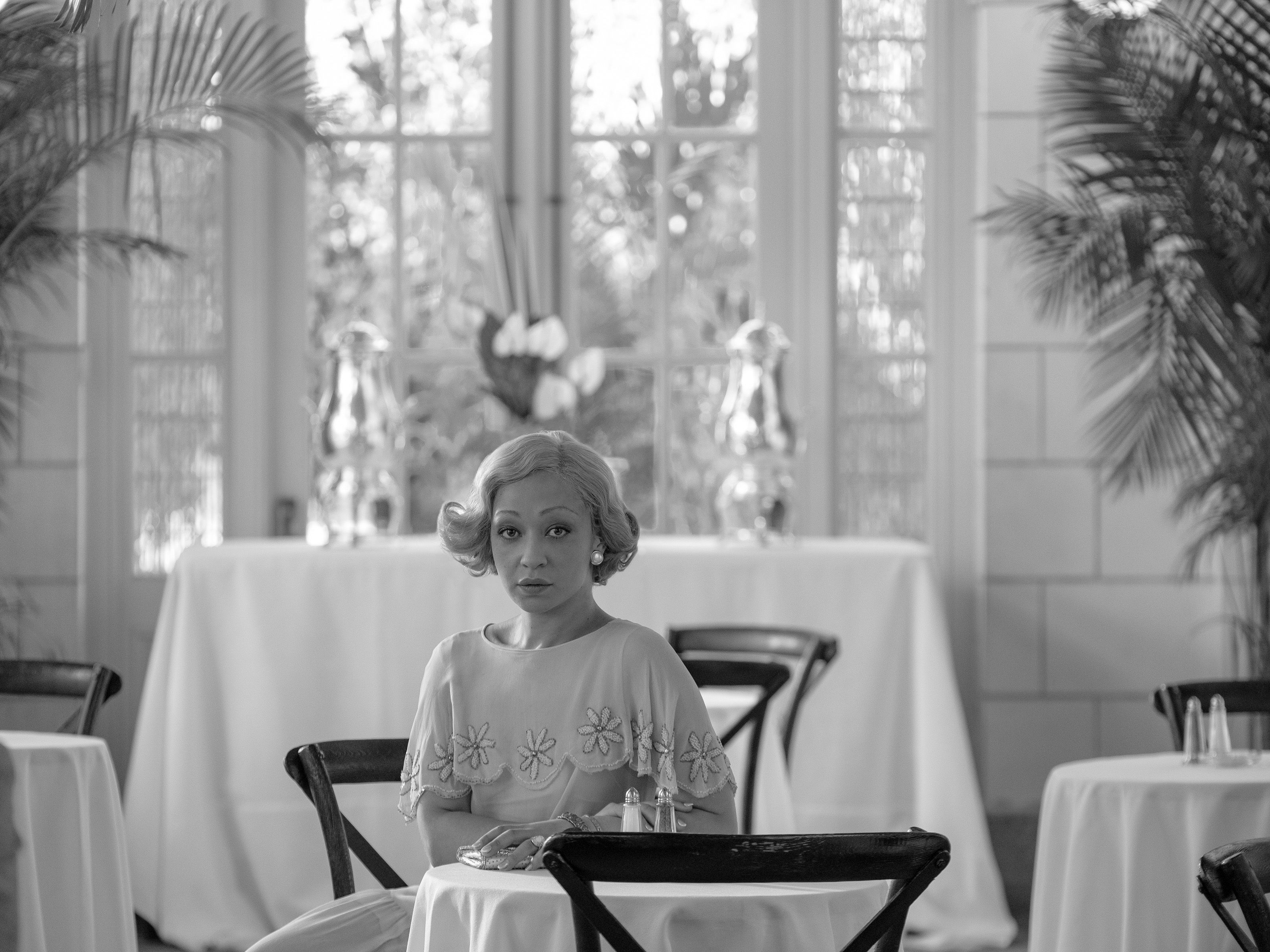 Both Ruth Negga and Tessa Thompson are widely known as actors of African descent. It has been remarked on social media that neither is “white passing.” Some see this as a problem for the film. But in fact, it is an asset. Viewers intuitively understand the risk when Irene (Thompson) eats in an upscale restaurant. Though the light is bright on her face, the surroundings are even “whiter.” Hall brings viewers inside a Black gaze, knowing she is sitting where she isn’t “supposed to be.”

Some have suggested that the casting of Thompson and Negga is questionable. But had there been a lighter-skinned actress playing Irene, for many contemporary viewers, the power of that moment might easily have been lost. Compare Thompson and Negga to the actress Fredi Washington, who played Peola in the first Imitation of Life, made in 1934. Peola is a character who desperately tried to pass for white, and Washington’s depiction was unsettling to viewers because, under the direction of John M. Stahl and the cinematography of Merritt B. Gerstad, she appeared as white onscreen. It was hard to even get the first Imitation of Life film approved according to the Motion Picture Production Code due to implied commentary about lynching and miscegenation. Times have changed, but Passingis a period piece. In 2021, we need to be cued to understand how race and racism worked in 1929. And Hall provides such key clues. When Clare’s husband (Alexander Skarsgård) teases her with an ironic and racially charged nickname, there is a gut recognition of its offense, because we know the café au lait-skinned, Ethiopian-Irish actor who plays Clare (Negga) is Black. That knowledge allows us to feel the weight of passing. 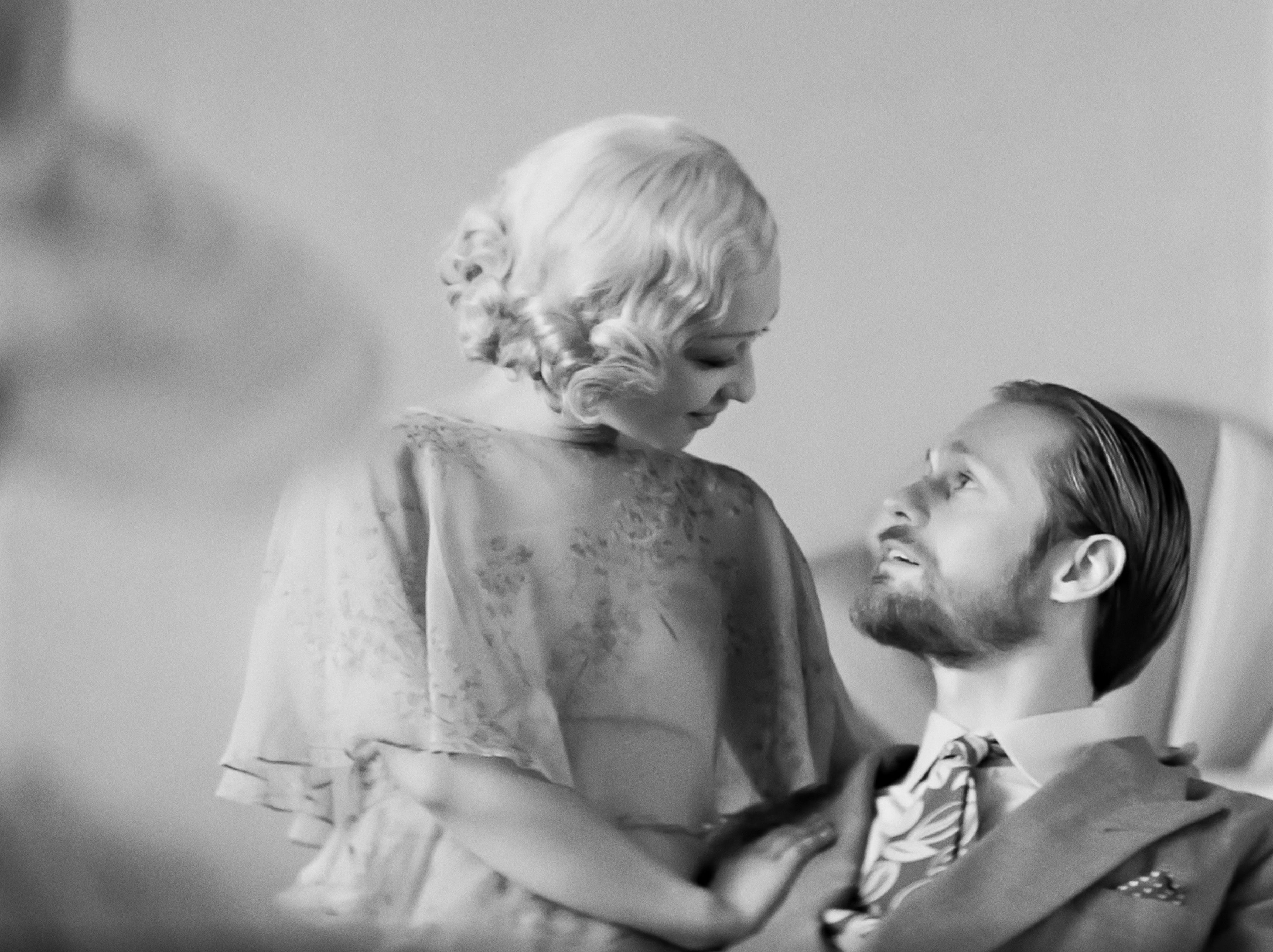 Shades of gray in this black-and-white film, of course, are a play on the idea of racial ambiguity that is so central to the story. People who stand at the crossroads of the color line have always exposed its absurdity. But the shades of gray do another kind of work in Passing. We are reminded that our sense of self shifts according to our encounters and relationships with others. And in this way, Hall’s film also resonates with the queer subtext and love triangle of Larsen’s novel, through texture and gesture. A piercing gaze, a discomfited mouth, illumination, and shadow all play into the appeal of dangerous uncertainties and suppressed desires. Clare raises her chin and widens her eyes at Irene in one scene, and Irene’s husband, Dr. Redfield (André Holland), in yet another.

One of the classic features of passing literature from the mid-19th to the mid-20th century was the presumption that those who pass never stop longing for Blackness. Longing is certainly one of the most powerful emotions of this film. But the longing, thankfully, isn’t due to some idea of a racial essence that grabs a hold of you and won’t let go. It isn’t rooted in pseudoscience. Today, we know that race is not real, biologically speaking, and that phenotype tells very little about origin or how much humans are related to each other. Race is socially constructed, as the saying goes, and yet very much shapes every aspect of our living. It is history, experience, family, affect, and affiliation. We live it with an emotional depth that can’t simply be measured by DNA. And that matters. Appropriately, then, in Hall’s version of Passing, the longing we feel is for intimacy, the sort of intimacy that is possible only when people stand before one another, stripped down of all pretense, willing to be held.