Phillip Schofield, 59, was back on hand to host the second instalment of This Morning this week alongside fellow presenter, Holly Willoughby, 39. With the ITV Daytime show being extended by half-an-hour earlier this year, the programme launched a new game segment, entitled Spin to Win. Viewers are given the chance to win big cash prizes, as well as possibly getting their hands on a bag of goodies. It was the latter which the host thought needed a shake-up as he announced there could be changes in the coming days.

The bag of goodies became an added incentive when the country went into lockdown due to the coronavirus crisis.

Included in the branded bag are prizes such as mugs and a jigsaw puzzle of some of the presenters most memorable moments.

As today’s game got underway, the giant wheel with cash totals placed around the outer rim, made its way down to the studio floor.

After the lucky viewer gave Phillip and Holly the correct password to play, the host then said the game needed something else to keep things fresh. 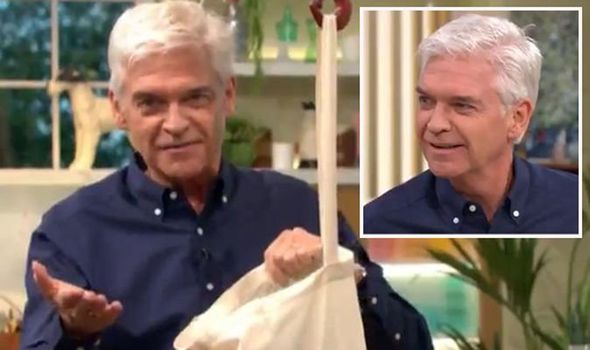 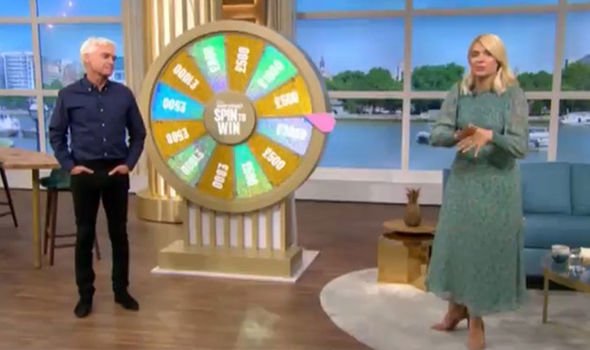 Having been given the opportunity to add more money to their jackpot, the lucky caller then had to answer one more question to get their hands on the bag of “shizzle” as Phillip calls it.

The holdall of the goodies descended into the hosts hands from above, to which he added: “We’ve been having lots of discussions about the bag.

“And it’s the fact that we’re thinking we might up the game slightly now,” he continued, teasing the changes viewers might see.

“Obviously, these things you have to say them out loud on the tele for them to actually happen rather than say them in a commercial break when no one can hear.” 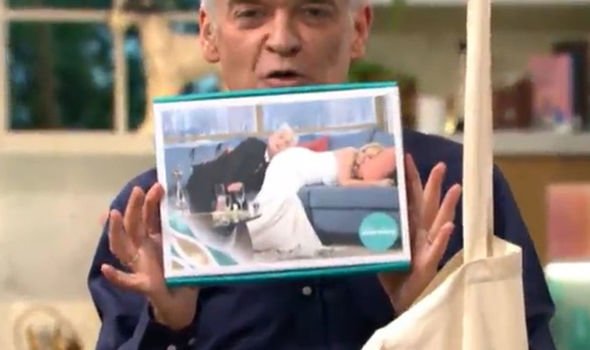 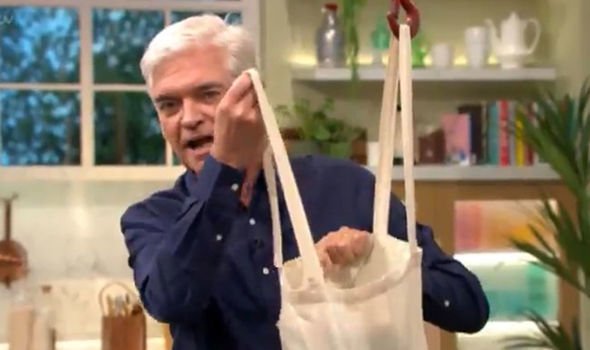 We’re going to add something else

Phillip then dug through the bag of goodies to reveal what the lucky caller was playing for today.

The host then added: “I think from now on, we’re going to add something else on a daily basis,” announcing a slight shake-up to the game segment.

“This doesn’t help you at all in any shape of form James, you just got the puzzle,” Holly told the viewer playing along.

Even with the fact they might not get any additional prizes, the caller won the bag of goodies as well as a £1,000 jackpot.

As well as using games to entertain the nation during lockdown, the presenters also discussed what they’ve been up to away from the studio.

Phillip started the show by telling viewers: “Well, we were just talking about running,” to which Holly added: “We never thought we’d have that conversation, did we?”

“Holly said, ‘What are you doing this afternoon?’ and I said, ‘I think I might go for a run,” the host said.

“It’s the third one I’ve done and I don’t run very often because I find I keep spilling my gin,” he quipped.

“I might give that a go,” the host commented, before stating he might use a fitness app to help him with his training.

“Give it a go,” Holly said, to which her co-star added he might have needed to begin his fitness venture nine weeks ago when lockdown started.

One viewer commented on Twitter encouraging Phillip to get involved: “Literally downloaded Sunday and did our first run yesterday. Go on @Schofe.”

Another added: “I’ve just started week 4, fitness is definitely improving with it and it really helps clear your mind and get out of the house.”