Good Morning Britain host Piers Morgan snapped at businessman Lord Alan Sugar for arguing that Theresa May’s deal allows the UK to leave the EU. Lord Sugar also claimed that Mrs May was dealing with a “brick wall” while the GMB host simply concluded that the Prime Minister was useless at her job, which left the businessman temporarily speechless. Lord Sugar began: “You Mr Morgan keep slagging off our Prime Minister as if she has done a bad job.

“How can you do a bad job when you are talking to a brick wall.”

The GMB host snapped back: “I think she is useless, I think she has been utterly useless.

“By the way, I don’t believe you think she has been any good either so don’t be so disingenuous.

“You do not think she is a good leader.” 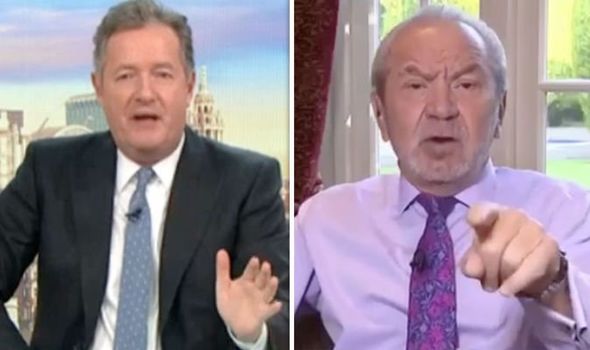 While stuttering Lord Sugar replied: “I think she has an untenable task.

“You can’t negotiate with a brick wall.”

Mr Morgan then responded: “In the business world you are known as someone who can be trusted on a handshake.

“The British public were told in a referendum that whatever they decided to do, would be honoured by the British government by Parliament.

Seemingly stunned Lord Sugar replied: “I’m sorry what has not been honoured?

The GMB host closed the interview by saying: “We haven’t left, we should have left by now.”