How Much Will the Meme Stock Surge Help AMC Theatres in the Long Run?

“Beat Shazam” was never going to beat the “Station 19” season finale with its season premiere, but initial Nielsen returns do not have the guess-the-music game show hitting anything close to a high note either. Fox actually finished behind Univision in total viewers on Thursday, when the Spanish-language leader broadcast soccer.

ABC and NBC ended up neck-and-neck in primetime ratings among adults 18-49. With “Station 19” actually topping “Grey’s” in total viewers, ABC racked up the most overall eyeballs across the 8 p.m. to 11 p.m. day part. 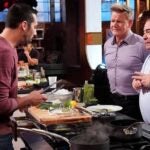 ABC and NBC tied for first in ratings, both with a 0.6 rating/4 share in the advertiser-coveted 18-49 demographic. ABC was first in total viewers with an average of 4 million, according to preliminary numbers. NBC was second with 3.5 million total viewers.

Univision was third in ratings with a 0.5/3 and fourth in total viewers with 1.4 million.

CBS, Fox and Telemundo tied for fourth in ratings, each with a 0.3/2. CBS was third in total viewers with 2.7 million, Fox was fifth with 1.2 million and Telemundo was sixth with 1 million.